This chromoprotein from the coral Anemonia sulcata, asPink (also known as asCP or asFP595), naturally exhibits strong color when expressed. The protein has an absorption maximum at 572 nm giving it a pink/purple color visible to the naked eye. The strong color is readily observed in both LB or on agar plates after less than 24 hours of incubation. The protein asPink has significant sequence homologies with proteins in the GFP family.

Important: This part is not available in the registry yet, however, the same part is available from the registry with the standard RBS B0034: BBa_K1033927.

Group: Linkoping_Sweden iGEM 2019
Author: Andreas Holmqvist, Leo Juhlin and Emmanuel Berlin
Summary: We studied the expression in of E.coli BL21(DE3) containing CBD-asPink (BBa_K3182100) protein with a constitutive promotor to see if the protein could be used for a pink/white screening. We also tested the bindning capacity of the CBD-asPink protein to a micro cellulose bandage and then studied the release mechanism.
Documentation: The expression system used contained the following parts: 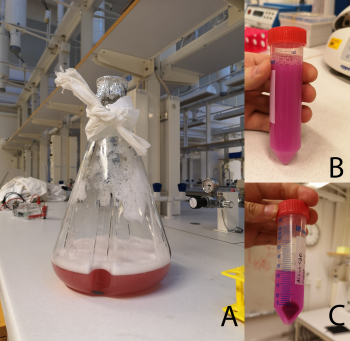 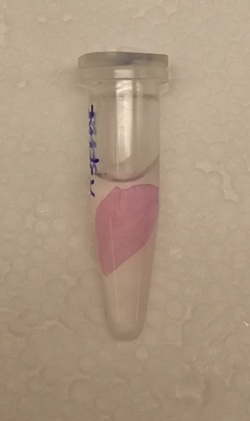 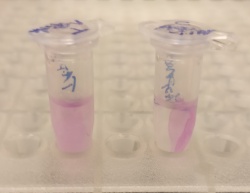 The protein was first extracted and characterized by Lukyanov et. al. 2000 under the name asFP595 (GenBank: AAG02385.1). This version is codon optimized for E coli by Genscript.

[2]Wilmann, Pascal G., et al. "Variations on the GFP Chromophore - A Polypeptide Fragmentation Within The Chromophore Revealed In The 2.1-Å Crystal Structure Of A Nonfluorescent Chromoprotein From Anemonia Sulcata." Journal of Biological Chemistry 280.4 (2005): 2401-2404.