This part is an empty backbone vector for the usage in Bacillus subtilis. It integrates in the thrC locus and can be selected with Spectinomycin cassette. It has a ampicillin resistance for cloning in E.coli. This backbone is a BioBricked version of the B. subtilis vector pDG1731.

This version is derived from BBa_K823022 and contains neither NgoMIV nor AgeI restriction sites, therefore is RFC25-compatible. This part was also evaluated in the publication The Bacillus BioBrick Box: generation and evaluation of essential genetic building blocks for standardized work with Bacillus subtilis by Radeck et al.. 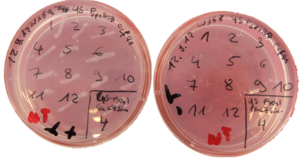