The part was tested using a Tecan Infinite 200 Pro plate reader for fluorescence measurements. Using this instrument, using excitation and emission wavelengths of 514 and 544 nm respectively was found to be most suitable. A culture of E. coli strain DH5a containing the part was incubated for ~24 h at 37 C with shaking. Cells containing a construct with GFP (BBa_K082003) under the Jen1 promoter (BBa_K284002) were not expected to express GFP under the conditions and were used as a negative control. Fluorescence was measured using 100 uL samples in Nunclon 96-well flat bottom black polystyrol plates (raw data) 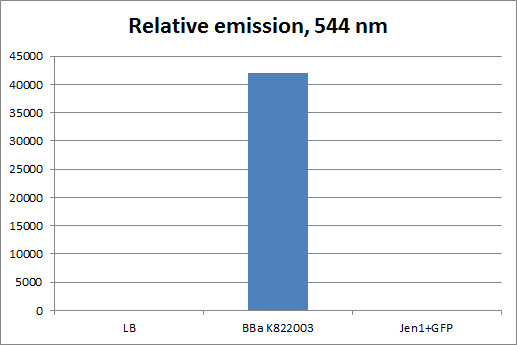 The fluorescence measurements above are not corrected for cell concentration (OD).Further experiments were made in connection with testing of oxygen-sensitive promoters, with averaging of readings and corrections made for the measured OD of the cell cultures that were sampled. These experiments failed to show activity by the oxygen-sensitive promoters, but provided further evidence for expression of YFP under the constitutive promoter. (raw data). 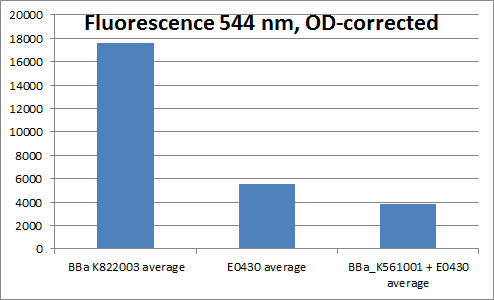