Cell cultures with plasmids not containing the colicin part were prepared and kept at 37 °C over night. Two new cultures were then prepared using cells from the overnight cultures. Cells containing the colicin part in an ampicillin resistant plasmid were lysed and the resulting lysate added to one of the cell cultures. The two cultures, one containing lysate of presumed colicin producing cells, the other containing lysate from cells not producing colicin, were then kept at 37 °C in a shaking incubator with 2 mL samples being taken out approximately once an hour. The OD of the samples were measured and compared. The OD of the colicin culture grew significantly slower than the negative control culture, indicating constitutive colicin production in this culture as expected. This experiment was carried out twice (the second time with two cultures containing the colicin plasmid) and the results are illustrated in the graphs below. 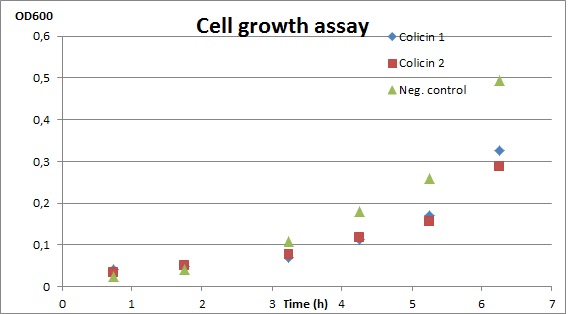 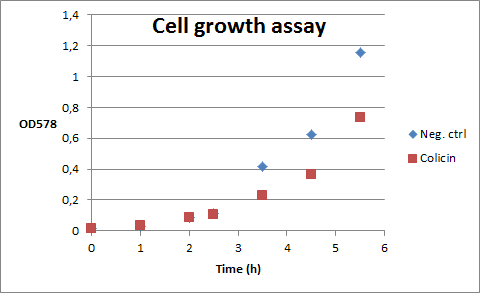 Colicin E1 is considered safe for use as a food preservative, and humans are likely to be chronically exposed to low levels of colicins produced by commensal gastrointestinal bacteria. [1] For this reason, we consider this part to present no particular safety issues.