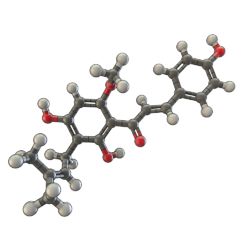 Inhibition of the metabolic activation of procarcinogens:

2-amino-3-methylimidazo[4,5-f]quinolone, found in cooked meat, verified as a procarcinogen in an ames salmonella mutagenicity test. The inhibition is probably a result of an inhibition of the cytochrome P 450 enzymes Cyp1A1, Cyp1B1 and Cyp1A2 (phase 1 enzymes). But in order to achieve a clear inhibition, plasma concentrations of 1 µM would be necessary. In a study with male rats oral administration of xanthohumol (50 mg/kg) led to concentration maximums of 65 -180 nM after 4 h. Improved resorption of xanthohumol could be a possible target for innovation [Yilmazer et al. 2001a, Miranda et al. 2000b, Henderson et al., 2000, Gerhauser et al., 2002].

P450-activated carcinogens get conjugated to endogenous ligands (gluthathione, glucoronic acid, acetate and sulfate) by phase 2 enzymes to facilitate excretion. Therefore the induction of phase 2 enzymes should enhance the protection against carcinogenesis. Xanthohumol cat concentrations of 2.1-10.1 µM could induce quinone reductase (detoxification of quinones by conversion to hydroquinones which can be conjugated) in hepatoma Hepa 1c1c7 cells. It was shown that xanthohumol could selectively induce quinone reductase without causing a transcriptional activation of Cyp1A1 [Miranda et al., 2000c, Gerhauser et al., 2002].

Inhibition of tumor growth at an early stage:

Xanthohumol showed an inhibition of the proliferation of breast cancer (MCF-7) and ovarian cancer (A-2780) in vitro at IC50 values of 13 and 0.52 µM [Miranda et al., 1999]. Furthermore xanthohumol can inhibit the endogenous prostaglandin synthesis through inhibition of cyclooxygenase (COX-1 and COX-2) with IC50 values of 17 and 42 µM. An increased prostaglandin production has been associated with the uncontrolled proliferation of tumor cells [Gerhauser et al., 2002]. Pharmacokinetic studies for xanthohumol based on beverages with an xanthohumol content of 50 mg/l in humans are part of actual research activities.

Xanthohumol at 5 µM decreased conjugated diene formation as a measure for lipid peroxidation by more than 70 % after 5 h of incubation in an in vitro assay (protection of LDL from Cu2+ induced oxidation). Furthermore xanthohumol was shown to scavenge hydroxyl-, peroxyl- and superoxide anion radicals [Miranda et al., 2000c]. </div>

The biosynthetic pathway of 4-coumaroyl-coenzyme A starts with the conversion of L-Phenylalanine to cinnamate, being catalyzed by phenylalanin ammonia lyase (PAL) [A]. PAL also shows activity in converting tyrosine to p-coumarate, but with a lower efficiency [B]. The cinnamate 4-hydroxylase (C4H) catalyzes the synthesis of p-hydroxycinnamate from cinnamate and 4-coumarate [C]: CoA ligase (4CL) converts p-coumarate to its coenzyme-A ester, activating it for reaction with malonyl CoA [D] [Trantas et al., 2009]. The flavonoid biosynthetic pathway starts with the condensation of one molecule of 4-coumaroyl-CoA and three molecules of malonyl-CoA, yielding naringenin chalcone. This reaction is carried out by the enzyme chalcone synthase (CHS) [E]. Chalcone is isomerised to a flavanone by the enzyme chalcone flavanone isomerase (CHI). From these central intermediates, the pathway diverges into several side branches, each resulting in a different class of flavonoids, such as xanthohumol.

There are 5 enzymes necessary for the biosynthesis of xanthohumol (MetaCyc):

Jiang et al succeeded in the biosynthesis of several flavonoids in Saccharomyces cerevisiae by the assembly of a plasmid containing three required enzymes (pKS2µHyg-PAL-4CL-CHS) and thereby showed the proof of principle. The activity of each enzyme was demonstrated and the presence of naringenin, which forms the product of the three enzymes( PAL, 4CL, CHS), was shown. [Jiang and Morgan, 2004]