Note: All work on this part was done virtually through literature research due to COVID-19 restrictions.

Our kill switch consists of a holin-antiholin toxin-antitoxin system. The holin protein creates holes in the bacterial cell membrane, which allows endolysin protein to pass through and degrade the cell wall, killing the cell. The antiholin protein binds to the holin protein, inactivating it. When both proteins are expressed, whether the cell dies depends on the relative concentrations of both the holin and antiholin components. [1]. 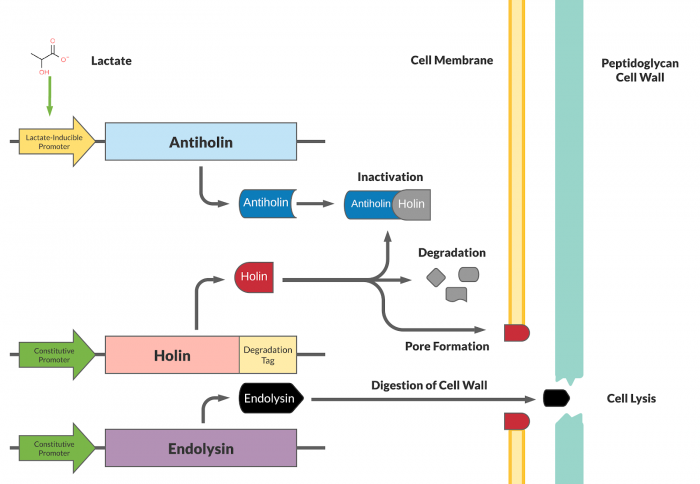 Figure 1. The kill switch consists of three different proteins: holin, which creates holes in the cell membrane; endolysin, which then passes through these holes to degrade the peptidoglycan found in the cell wall; antiholin, which binds to holin to create an inactivated dimer, preventing holes from being formed in the first place [2].

This BioBrick has been designed as a modification to a traditional holin/antiholin kill switch so that the expression of antiholin is controlled by a lactate-inducible promoter, as research shows that lactate concentrations are higher in tumor environments (10-30 mM) compared to healthy tissue (1.5-3 mM) [3]. The toxin, holin, is expressed under a constitutive promoter, as in a typical holin/antiholin kill switch. When in the presence of high lactate, enough antitoxin (antiholin) is produced under the lactate inducible promoter to significantly counteract holin. Otherwise, antiholin is not sufficiently produced, and the bacteria soon die. This allows the bacteria to localize and survive in high-lactate environments such as tumor cells, and die in other environments (i.e. healthy human tissue), as shown in Figure 2. 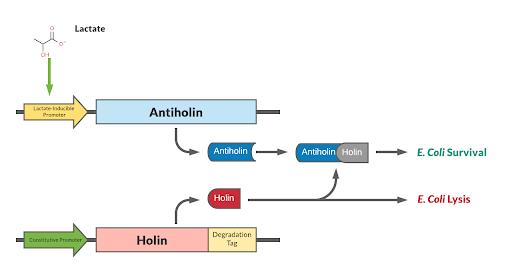 A degradation tag is attached to the holin protein, which marks it for disposal and reduces its half-life in the cell. This limits the activity of the holin toxin prevents its buildup over time, allowing the bacterial population to survive indefinitely as long as it is within a high-lactate tumor environment. 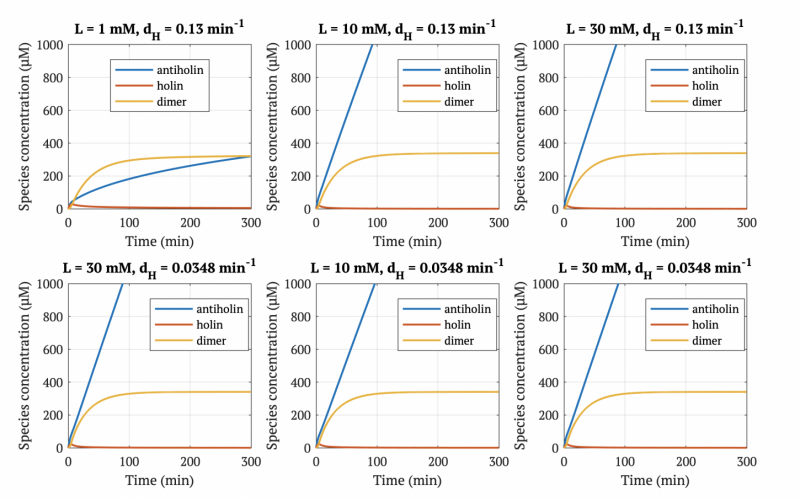 However, without our improvement (ie. without degradation tag), as can be seen in the bottom panel of Figure 3, the holin concentration of all of them is between 0.65 uM and 0.75 uM for concentrations throughout 1 mM to 30 mM, both of which would allow survival. Since this range all allows for bacterial survival, this kill switch would not be specific to cancer tissue without the degradation tag.

The MATLAB scripts corresponding to the mCardinal modeling can be downloaded here: File:ModelingCodeCornelliGEM2020.zip

Figures 4-6 show the concentrations of holin, antiholin, and the inactivated holin-antiholin dimer at different levels of lactate. At a lethal concentration of 1.66 μM, holin kills the bacterial cell [1]. Whether holin reaches this level depends on the relative concentration of antiholin, whose expression is influenced by the lactate level of the surrounding environment. 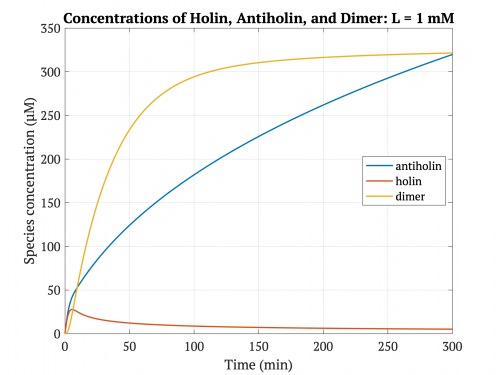 Figure 4. At 1mM, a very low level of lactate (L) that would be expected outside of the tumor environment, the steady-state concentration of holin is 5.47 μM. This indicates that under these conditions, the bacteria will not infiltrate healthy tissue. 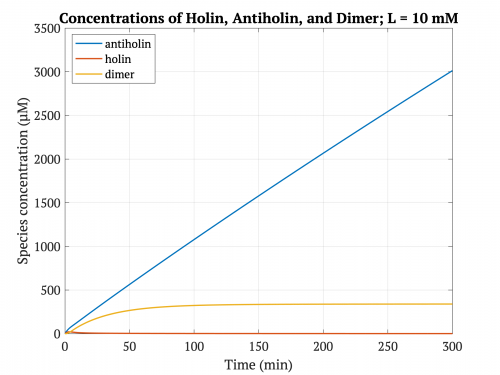 Figure 5. At 10 mM, which is towards the lower end of the tumor lactate level (L) range, the steady-state concentration of holin is 0.59 μM. The bacterial cells will persist and proliferate. 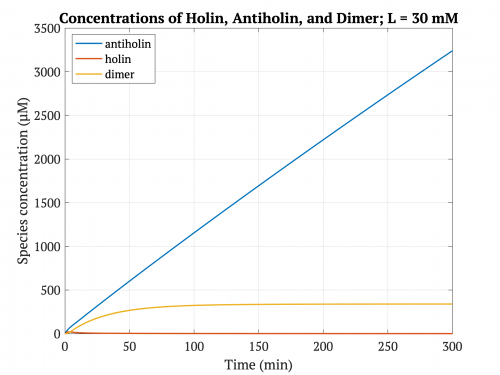 Figure 6. At 30 mM, a high level of lactate (L) that would be expected in the tumor environment, the steady-state concentration of holin is 0.54 μM. The bacterial cell likely survives.