This vector is based on the commercially available vector pYES 2 by Invitrogen.

What is the use of DNA sequences coding for valuable enzymes without the possibility to express them and analyze the protein activity?

As we planned to detect the enzymes from our biosynthetic pathways via Strep-tag II, a RFC25 compatible backbone was necessary. As no such backbone was availabe for yeast in the PartsRegistry, an important task at the beginning of our project was the design of an expression vector for yeast which is compatible to the iGEM cloning principles and standards. Based on the commercially available pYES2 vector, manufactured by Invitrogen, we created an vector containing:

Furthermore we designed several vectors containing our constitutive promoters Tef1, Tef2 and ADH and different additional terminators. The different versions of the vector have been successfully applied and tested in all other subprojects.

The project work began with the replacement of the original multiple cloning side for a completely new designed multiple cloning site containing the typical RFC10/25 pre- and suffixes. Furthermore we integrated a gene sequence coding for a Strep-tag II in front of the suffix. This facilitates the purification and detection via Western Blot of expressed enzymes dramatically. The new multiple cloning side was constructed of four desoxyribooligonucleotides via oligonucleotide hybridization and ligation into the original pYES vector restricted with the outermost restriction enzymes of the old MCS.

In a further step all forbidden restriction sides of the enzymes used in the RFC10/25 standard in the vector backbone were deleted via side directed mutagenesis. The picture above shows different vector samples of this successive process which have been restricted with NgoMIV, PstI and SpeI: The resulting fragments decrease with each step leading to the pure vector backbone which is linearized by cutting in the multiple cloning side. Hence our first expression vector containing the original galactose inducible pGal 1 promoter was ready for cloning with iGEM standards!

A second step of this subproject was the exclusion of the f1 origin of replication for the phage λ and of the pGAL1 promoter. The resulting vector pTUM100 can used as powerful basis to integrate a wide variety of user defined promoters, genes and terminators. In our case we integrated the constitutive promoters Tef1, Tef2 and ADH in order to characterize them.

Explanations on the figure: Figure A shows the new multiple cloning site (MCS) containing the RFC 10/25 restriction sides and the DNA sequence coding for the Strep-tag II. 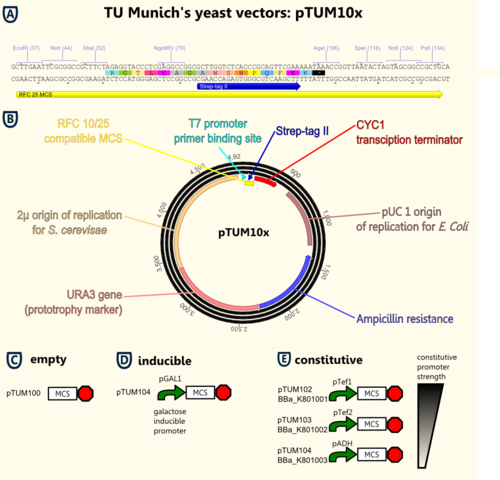 The figure on the right gives an opinion of all important elements located on the vector backbone:

Based on the yeast shuttle vector without promoters called pTUM100 we created several vector versions containing constitutive promoters. This is represented in figures C to E:

All of these versions were submitted as Biobricks.

The pGAL1 promoter system is repressed in presence of glucose(West et al., 1984). Therefore maintaining cells in glucose containing medium causes the lowest basal transcription activity. Changing the carbon source to galactose de-represses the promoter so that transcription activity increases(Giniger et al., 1985). Alternatively cells can be maintained in raffinose which neither repress nor induce transcriptional activity. However the induction of transcriptional activity by galactose is accelerated by maintaining cells in raffinose. To characterize th pGAl1 promoter we cloned eGFP in a pTUM104 vector and transfected S. cerevisiae INVSc cells. A single colony of 2-3 mm diameter was used to inoculate a overnight culture in 15 ml SC-U medium containing glucose. The OD at 600 nm was measured and an appropriate volume of cells was sedimented and resuspended in galactose containing SC-U media to create an initial OD of 0.4. In the further process samples of 1 ml volume were taken hourly and the OD at 600 nm as well as the fluorescence at 488 nm were determined. The fluorescence signal was normalized by divide by the OD600 signal. 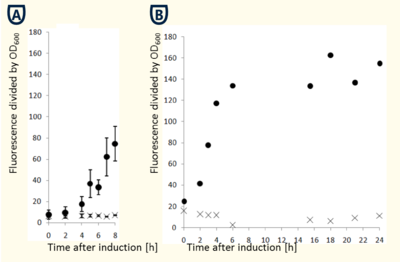 Explanations on the figure: The figures show the normalized fluorescence signal in dependence of time after induction

The figures above show that the cells need to 6-8 h to reach a stable level of promoter activity. However the obtained data may vary in dependence on the time which is necessary for a protein to fold itself correctly.

The data shown above as well as the numerous successful expressions of desired enzymes based on the pGAL1 promoter did prove its functionality. Nevertheless we will characterize this as well as all of the constitutive promoters via luciferase assays to consider different protein folding times. Furthermore we will design an additional vector carrying a His-tag instead of a Strep-tag II in order to extend the application range.