Not Released
Sample It's complicated
Experience: Works
8 Uses
Get This Part 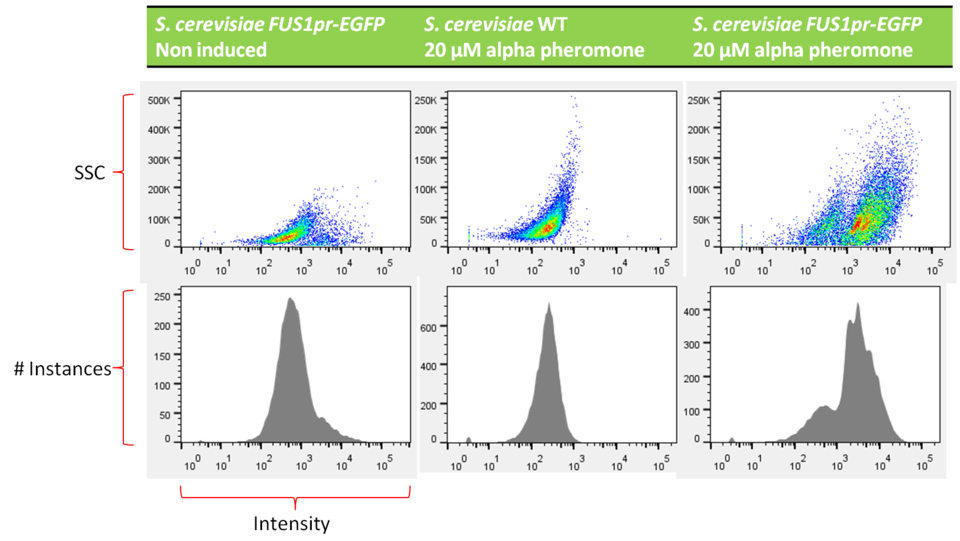 GFP intensity and growth curves of S. cerevisiae transformed with FUS1pr-EGFP after induction with alpha pheromone 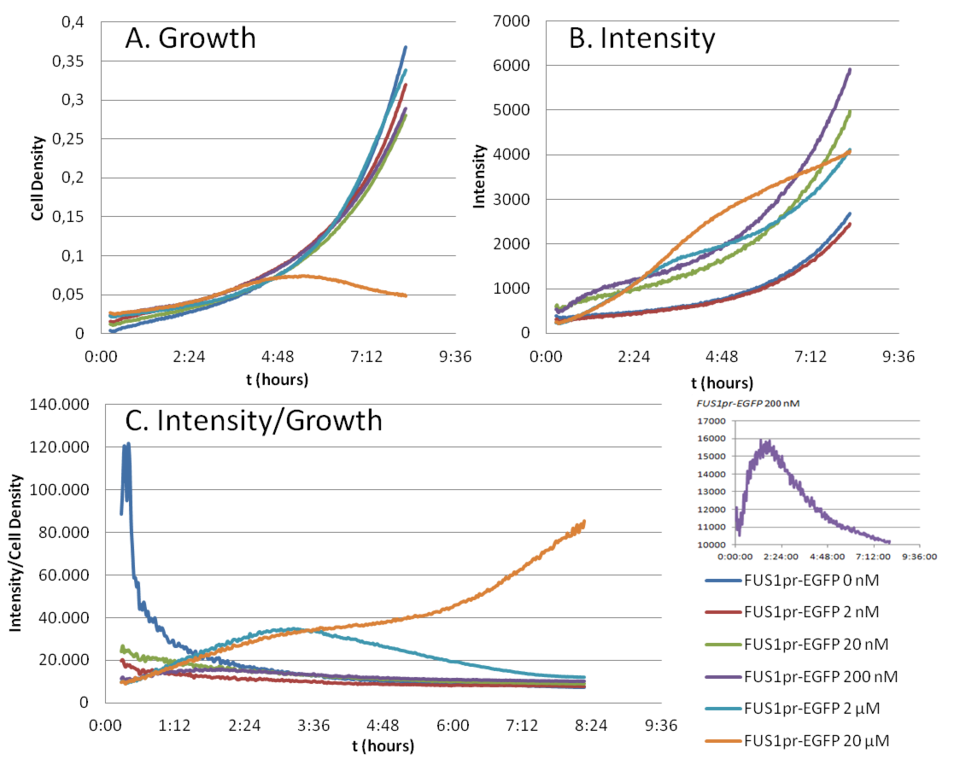 iGEM18_NEFU_China creat a new parts BBa_K2542014，which is based on BBa_K775004. BBa_K2542014 is more suitable for somewhere which needs low expression in yeast.It's allows a type yeast to sense the α factor secreted by α-type yeast and express green fluorescent protein. We modified the part BBa_K775004 of the previous team by turning mutating the sequence “AAAAAA” into “GCCACC” to make the expression efficiency weaker，and make it more appropriate for suicide gene（Information Destroyed ). We constructed two plasmids with different kozak sequences and transferred them into yeast. Then, we use SD-Trp medium to culture yeast, and add with the solution which containing α factor. The solution containing α factor is obtain by extracting the liquid supernatant of the culture medium for culturing α-type yeast. After we add 200ul the α factor sloution to each one and culture yeast for 20 hours，we measured the expression of GFP in yeast by flow cytometry. 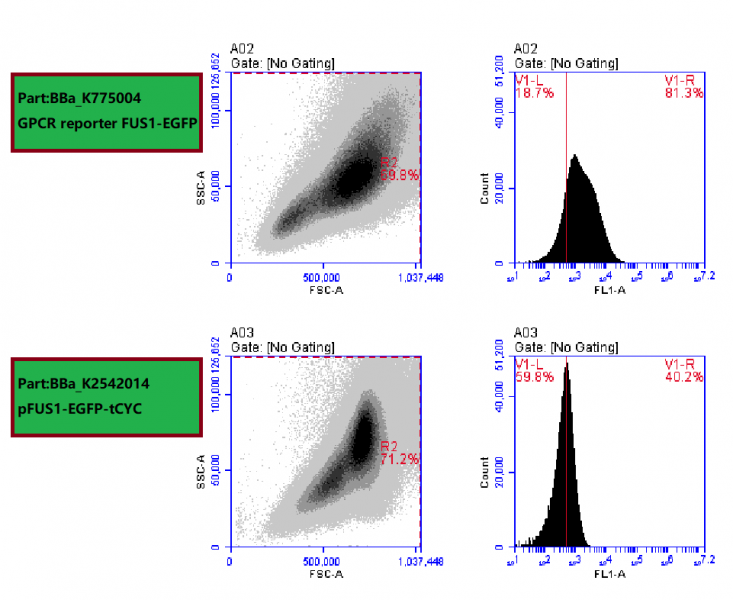 In the project of 2018, Tsinghua-A team, the part BBa_K775004, the pheromone responsive element pfus1, together with a EGFP reporter gene, was inserted to the plasmid pYES2 which has its original GAL1 promoter removed through HindIII digestion, yielding plasmid pYES2-pfus1-EGFP. pYES2-pfus1-EGFP was transformed into a-typed yeast strain CEN.PK2-1C. After the addition of α factor, compared with the non-induction group, EGFP intensity inside the yeast got stronger from the 1h group to 5h group, these yeast cells also experience chemotropic growth. 6h after the addition, it seems EGFP protein was released into the medium,as showed in the following figures, while Flow Cytometry data suggested the high background, or low siganl noise ratio in this experiment, may due to the lost of plasmids. See http://2018.igem.org/Team:Tsinghua-Afor detailed description. 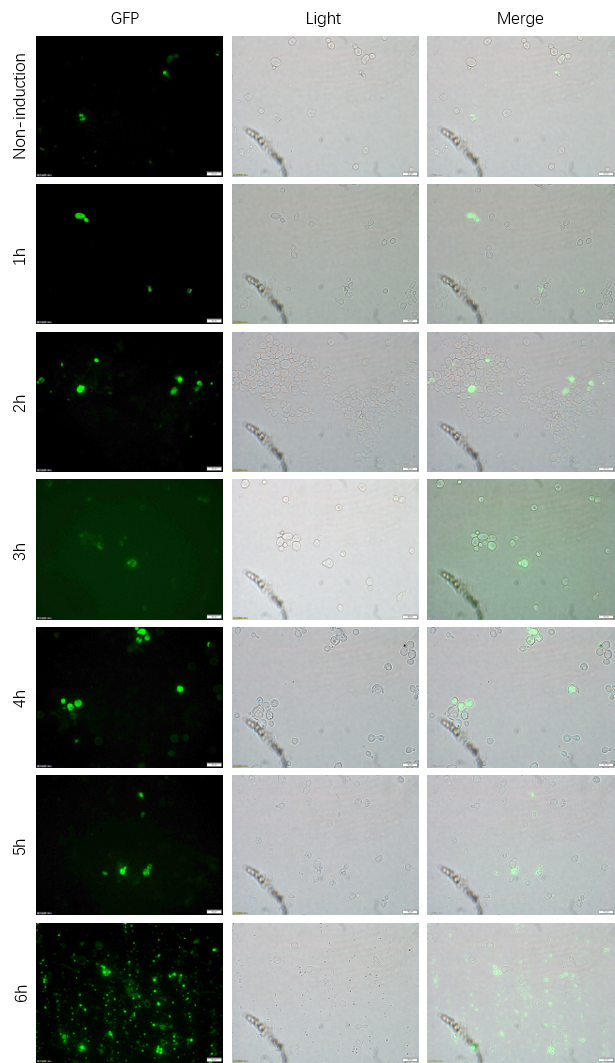 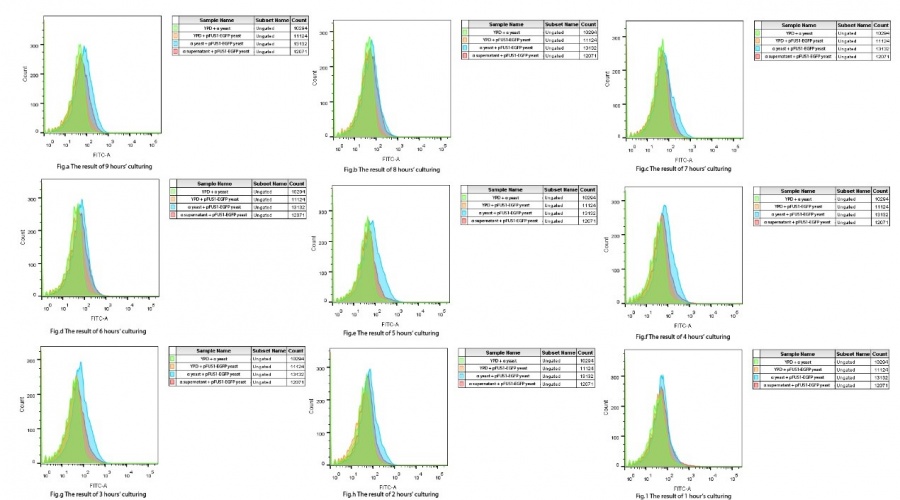