This construct was developed by Northwestern's 2011 iGEM team as part of a Pseudomonas Aeruginosa detector. The device is designed to fluoresce with GFP in the presence of PAI1 (3-oxo-C12-HSL), one of the Pseudomonas quorum sensing molecules. The promoter in front of GFP is activated by the combination of PAI1 from the environment and the LasR receptor (produced by this construct). 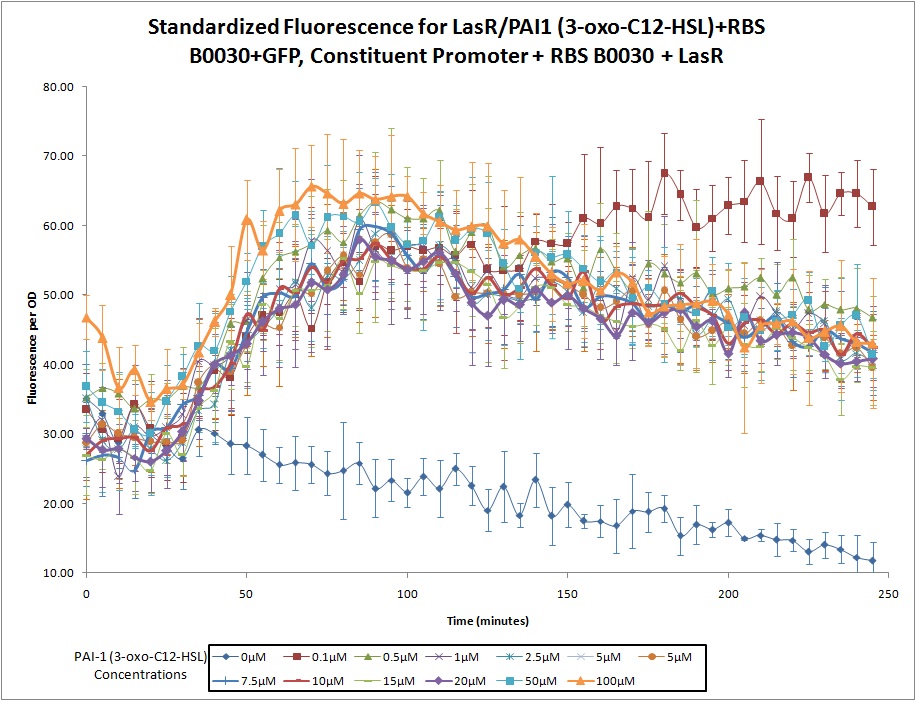 Team RMHS_Maryland 2018 contributed to the characterization of this part by obtaining novel dose-dependent expression data for this construct in a different chassis, E. coli BL21, at realistic AI-1 concentrations (5-1000nM) that E. coli produce and respond to, demonstrating the construct’s suitability for use in co-culture.
(--ishayardi 20:24, 16 October 2018 (UTC))

Team RMHS_Maryland 2018: Characterization of dose-dependent activity of PAI-1 promoter in BL21 Escherichia coli for use in co-culture

NOTES ON GRAPHS AND TABLES
Percent of cells fluorescing was determined through ImageJ analysis of cell counts under Brightfield microscopy as compared to cell counts under fluorescent microscopy (cell count in fluorescent scope/cell count in brightfield microscope). Towards the end of the experiment there seemed to be a lot of cell debris in brightfield, so it is possible that the percent of cells fluorescing for time 4 was underestimated, since our method was unable to account for dead cells which could show up in brightfield but without continuing to fluoresce.

Time 0 indicates when the first measurement was done. Prior to this, BL21 overnight cultures were diluted 50x into a 3 mL culture and grown for one hour at 37C before AI-1 was added. OD at time 0 was about 0.3 and measurements were taken directly after AI-1 was added. The sensitivity of the PAI-1 promoter (as based on its fluorescence even on levels of AI-1 as low as 5 nM) may therefore explain the high initial percent of cells fluorescing even at time 0.

RESULTS
Team RMHS_Maryland 2018 obtained novel dose-dependent expression data for this construct in a different chassis, E. coli BL21, at realistic AI-1 levels that E. coli produce and respond to, demonstrating the construct’s suitability for use in co-culture (Kaplan 1210, Rutherford 1). Because we noted that fluorescent expression was similar in nearly all of the high AI-1 concentrations tested by Northwestern, we aimed to use lower concentrations of AI-1 to determine if this promoter exhibited dose-dependent expression at realistic concentrations less than 1 uM: 0, 5, 17.5, 25 and 100 nM. We also sought to characterize how sensitive the construct’s promoter was to changes in AI-1 concentration by using a lower bound of 5 nM and relatively small increments between concentrations tested.

BBa_K575024 was transformed into BL21 using heat-shock single-transformation protocol. The previously mentioned concentrations of synthetic AI-1 were added and cells were imaged using brightfield and fluorescence microscopy every 90 minutes. Percent fluorescence, the number of cells fluorescing divided by total number of cells in the same field, was determined by comparing fluorescence and brightfield images of the same fields using ImageJ analysis.

At lower levels of AI-1, percent expression of fluorescence is shown to be dependent on the amount of AI-1 present. Our findings demonstrate that the PAI-1 promoter is very sensitive, exhibiting fluorescence at concentrations as low as 5 nM. Concentrations of AI-1 around 10-100 nM elicit high rates of expression, but after about 4 hours show a sharp decrease in percent and intensity of fluorescence, possibly due to degradation of the autoinducer by cells. Percent fluorescence and qualitative observations of fluorescence intensity are lower with 1 uM AI-1 than with 25 or 17.5 nM, but fluorescence persists for a lengthier time period. This finding suggests that AI-1 persists in the media for hours without being degraded, and that high AI-1 concentrations much as 1000 nM may elicit less expression as they exceed optimal ranges used for cell-to-cell communication (Kaplan 1210). Leaky expression of promoter was minimal, as illustrated by the lack of fluorescing cells in the control batch culture. Based on the results of our investigation, BBa_K575024 is extremely well-suited to facilitate two-way population-to-population communication in E. coli co-cultures due to its sensitivity, dose-dependent expression, and minimal leakiness. These findings were verified by our project, “Conversensations”, as BBa_K575024 was an integral part of our successful two-way quorum-sensing feedback loop.

It can be observed that although the number of cells fluorescing may be similar, intensity of fluorescence is much higher in response to 17.5-100 nM AI-1. This remained true for all three time points, suggesting that the cells themselves may be optimized to respond to certain levels of AI-1 concentrations better than others.