This part is the coding region for the protein transaldolase, making up the tal gene. Used within the plasmid BBa_K4047036, this plasmid aimed to induce over expression of transaldolase by inserting a copy of tal into neutral site 1. This plasmid contains the necessary promoters and terminators for successful expression of the gene.

This part was found to be functional in the experimental work of the MiamiU_OH 2021 team, with successful integration into the neutral site confirmed through PCR. The integrated sequence was confirmed to be the same one shown here through genetic sequencing, confirming no mutations occurred.

To our knowledge at the time of part registration, this is the first and only coding sequence for transaldolase in the iGEM parts registry.

See the design page for details on current homology (as of 2021), as this enzyme is not well characterized outside of Synechococcus species in the NCBI database.

Although proteomics had not yet been completed by the end of the competition timeframe, transformants did display different growth than wild type cells, indicating a successful shift in protein activity, as shown in the attached figure. Considering this gene is sourced from the chassis genome itself and maintained sequence faithfulness to the original source when integrated, we can safely conclude that the expressed proteins were functional transaldolase. We can also conclude that the differential protein activity was due to transaldolase overexpression, as this was the only change induced. 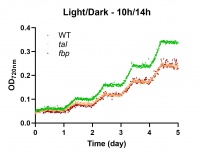 Growth of Synechococcus elongatus cells when induced to overexpress transaldolase or fructose-1,6-bisphosphatase compared to wild type cells, as recorded in the MiamiU_OH 2021 project.

This coding region was sourced from the Synechococcus elongatus PCC 7942 Genbank genome sequence for transaldolase to maximize efficiency within the same organism as a chassis. This enzyme is natively expressed within the organism and plays a role in its central metabolism, catalyzing the reversible conversion of fructose-6-phosphate and erythrose-4-phosphate to glyceraldehyde-3-phosphate and sedoheptulose-7-phosphate. This reaction is part of the Calvin-Benson-Bassham cycle, making it relevant to future work altering photosynthetic reactions.