σ28 is a special transcriptional factor concerning the fliA, which is an alternate sigma factor for the class 3 flagella operons. 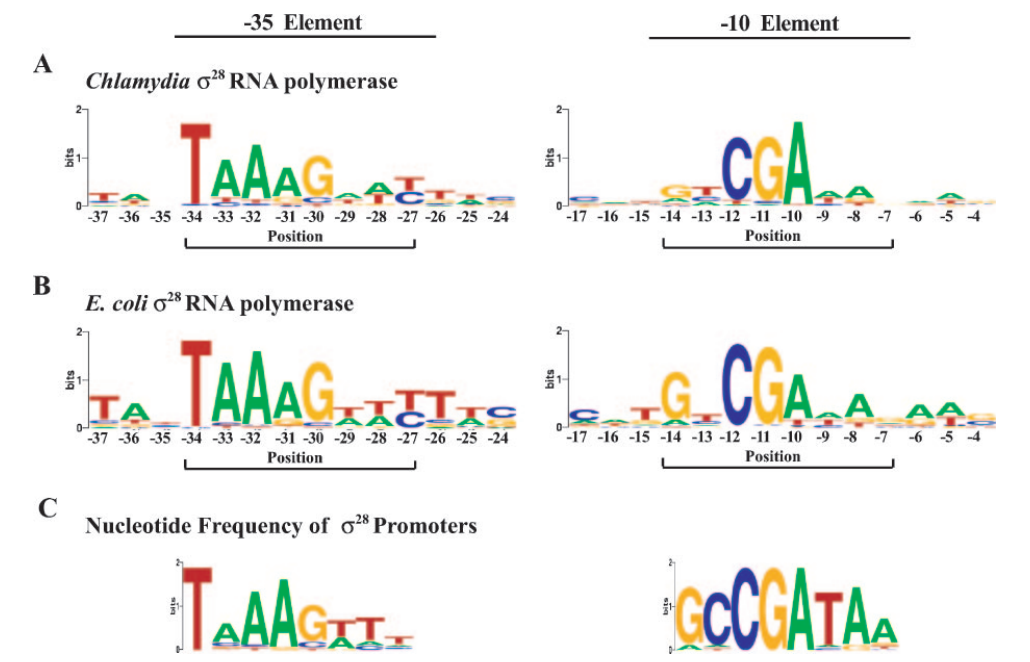 Figure 1. Sequence logos for the -35 and -10 elements of the σ28-dependent promoter. (A) Sequence recognized by C. trachomatis σ28 RNA polymerase in the context of the C. trachomatis hctB promoter. (B) Sequence recognized by E. coli σ28 RNA polymerase in the same promoter context. (C) The sequence logo based on the nucleotide frequencies of known bacterial σ28 promoters.

σs have been divided into four groups based on their phylogenetic relationships and modular structure. σ28, a Group 3 σ, is the most widely distributed alternative σ factor , making it an attractive candidate for study of its promoter recognition. σ28 controls expression of flagella-related genes in all motile Gram-negative and Gram-positive bacteria, and plays a role in development in some non-motile bacteria.
Some researches found very similar results for σ28 RNA polymerase from C. trachomatis and E. coli, suggesting that promoter recognition by this alternative RNA polymerase is well conserved among bacteria. Bioinformatic analysis of E. coli s28 promoters suggests that their consensus sequence is TAAAgttt-N11-GCCGATAA.

Transcription is based on the core RNA polymerase and the primary sigma factor σ70 present in the cytoplasmic extract. All of the circuitries start with σ70 specific promoters. This σ70 E. coli promoter is the strongest so far reported. The six other sigma factors and the two bacteriophage RNA polymerases are expressed to engineer elementary gene circuits, such as transcriptional activation cascades and an AND gate. The repertoire of regulatory elements provided by σ70 specific promoters is much larger than bacteriophage systems. Yet, the transcription modularity with one sigma factor only is restrictive.

Figure 3. Schematic of cascade of gene circuits. σ28 is capable of motivating the promoter P28, and promote the expression of deGFP.

This year, ZJUT-China aimed to develop a biosensor to detect RNA biomarkers related to diseases. Cascade of genetic circuits was designed to be utilized in the biosensor with Cell-Free system. In the gene circuits, we constructed plasmid P70a-σ28, P28-tetO-deGFP, and P70-σ28-P28-tetO-deGFP.
The cascade of two plasmids was divided in the Cell-Free system, whereas two parts of the cascade were incorporated into one composite part in bacteria. 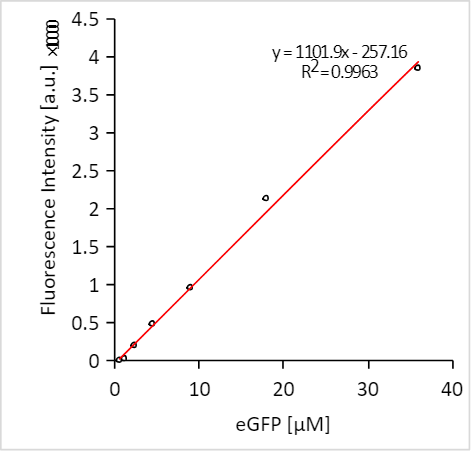 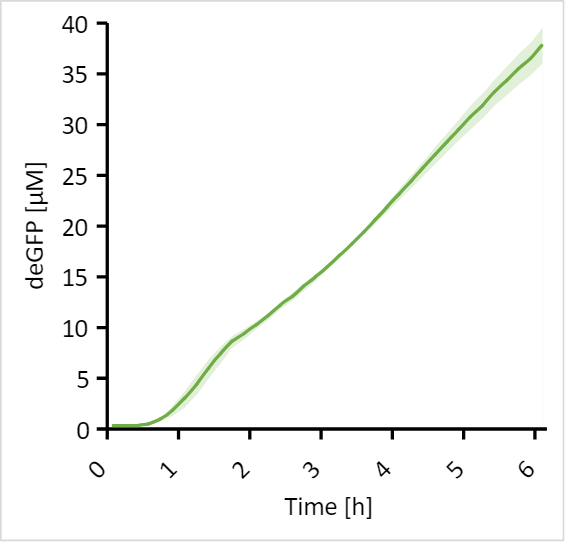 The transcriptional factor σ28 combines with σ70 to become a cascade, which is more regulable than σ70 in the Cell-Free system. Meanwhile, σ28 is capable of activating the promoter P28 to express the deGFP gene, which is weaker than the P70a promoter.

To enhance the expression intensity of each component, we use σ28 as the promoter factor. σ28 is a special transcriptional factor concerning the fliA, which is an alternate sigma factor for the class 3 flagellar operons, and it does not exist in Cell-free system. To verify the functional availability of σ28, we build P70a-σ28-P28-deGFP plasmid. If the expression of σ28 is normal, it shows fluorescence. Conversely, there is no fluorescence. To verify the normal expression of σ28, we performed electroporation experiments with E. coli BW25113. 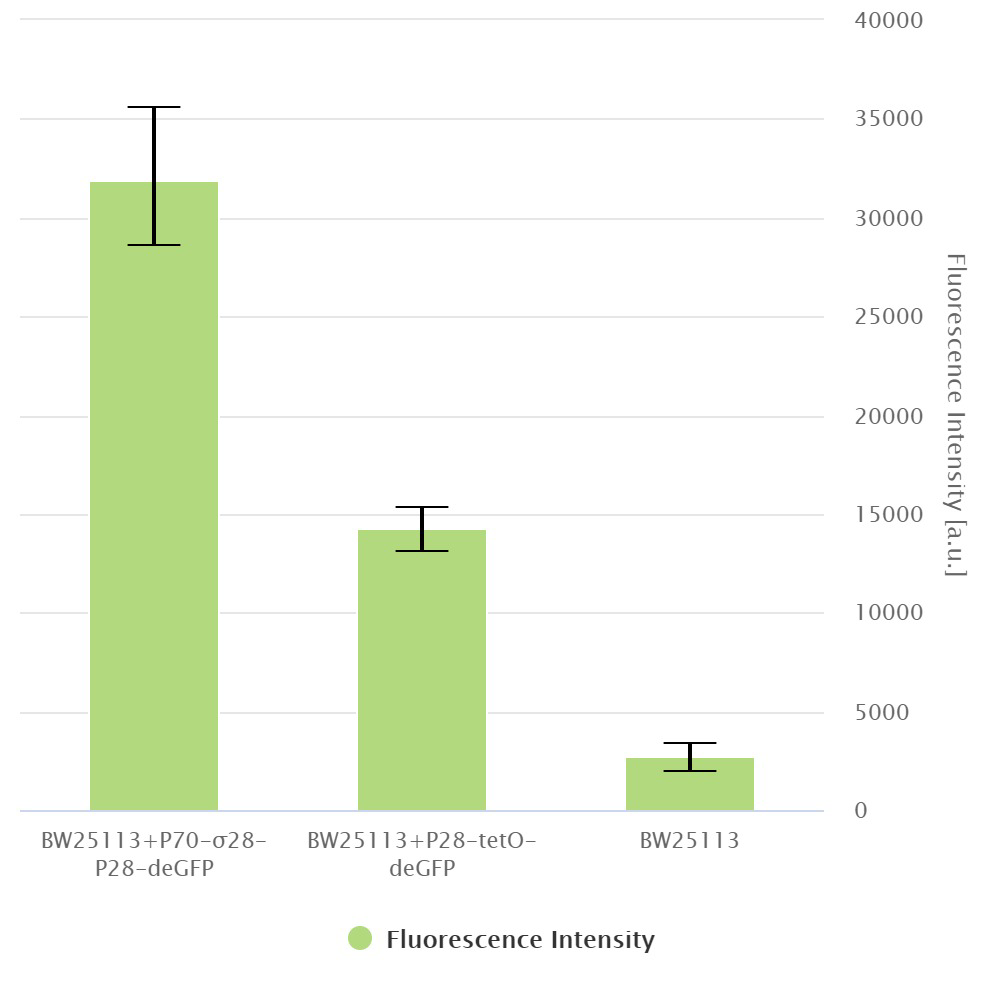 We built a deterministic gene expression model to analyze gene expression in the Cell-Free system. In this model, DNA transcription, mRNA degradation, and mRNA translation are described by Michaelis-Menten kinetics while protein maturation follows a first-order kinetics.

The system of equations describing the cascade P70a -σ28, P28-deGFP is as follows: 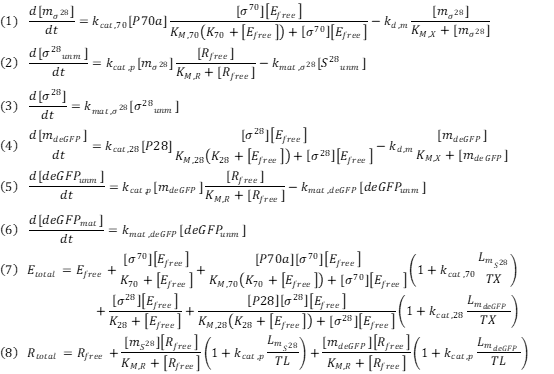 Details of the derivation process can be found at Model. 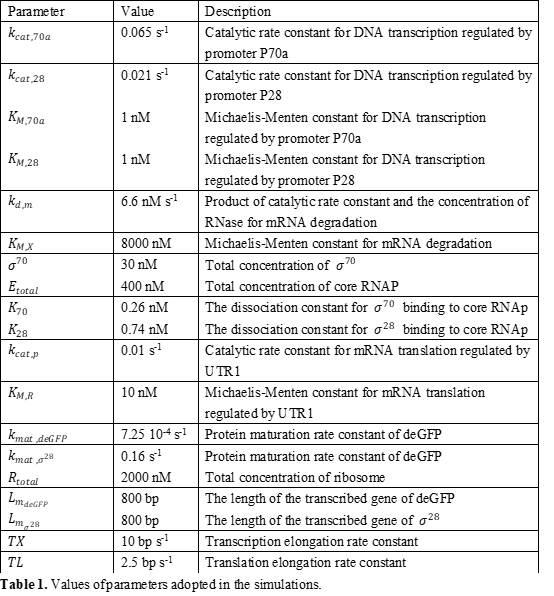 For optimal expression, P70a-σ28 and P28a-deGFP should be set at 0.5 nM and 15 nM, respectively. Due to the low concentration, we assume that P70a-σ28 provides sufficient σ28 without depleting the transcriptional and translational machinery. Thus, the maximum protein synthesis rate of P28-deGFP saturates at 15 nM. P70-deGFP reaches its maximal protein synthesis rate at 5 nM. So, we consider that the value of the catalytic rate constant for transcription regulated by σ28 is approximately one-third of that of σ70 :

By fitting the model to the data from The all E. coli TXTL Toolbox 2.0, the protein maturation rate constant of σ28 is found to be 0.16 s-1 .