This composite part is a generator consisting of the pDawn promoter and S105.

The target gene of pDawn blue light response system (BBa_K1075044) and Lambda Lysis Cassette S105 (BBa_K3740024) were inserted into the pSEVA331 expression vector. Then, random primer guided mutagenesis method to modulate the strength of the RBS (BBa_B0034) located upstream of S105. After introducing into E. coli DH5α, a drop plate assay was performed to screen the bacterial isolate that can grow normally in the dark but not under the blue light irradiation.

Although S105 grew in the dark and did not grow under blue light, the growth state of plaque in S105 was abnormal in the dark. We speculate that it should be caused by the background expression of the pDawn promoter in the dark. (The blue box is invalid data.) 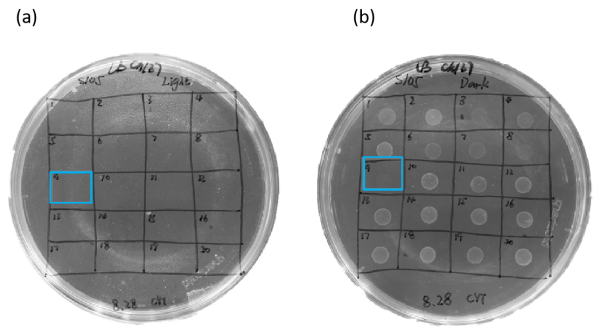 Due to limited time, we have not been able to verify the lytic function of S105 in G. hansenii ATCC 53582.