This part consists of the following four subparts: T7 promoter (BBa_J64997 ), Toehold_Switch-30-5p (4) (BBa_K3727007), Enhanced Green Fluorescent Protein (eGFP) (BBa_K1094400) and T7 terminator (BBa_K731721). The T7 promoter and T7 terminator are essential sequences for the initiation and termination of the transcription of this part, when expressed in bacterial systems. The toehold switch is a sequence that is complementary to an arbitrary trigger molecule and it regulates the expression of its downstream gene, which in our system, is eGFP.

This toehold switch includes two crucial areas: The first one is complementary to the sequence of the miRNA molecule hsa-miR-30e-5p. The second one is complementary to a different part of the molecule, so that alongside sequences of our own design, form a hairpin-structure. A Ribosome Binding Site (RBS) is embedded in this structure, so that the binding of the ribosome , and as a result the translation of eGFP, is inhibited. In the presence of hsa-miR-30e-5p which is complementary to the first part of the Toehold_Switch-30-5p (4) the hairpin unfolds and the ribosome is able to bind to the RBS region and initiate the expression of eGFP [1],[2].

With this system the expression of eGFP and consequently, the intensity of fluorescence can be associated with the quantity of the specific miRNA molecule.

In order to check the functionality of the Toehold_Switch-30e-5p (4), we measured the fluorescence produced by the in vitro expression of the eGFP protein. The gene of the eGFP is connected with the toehold switch sequence and it can be expressed only in the presence of the trigger RNA, hsa-miR-30e-5p. For the transcription and the translation of eGFP we used a cell-free system, NEB - PURExpress in vitro Protein Synthesis kit (#E6800) and we measured the fluorescence produced, with the plate reader “Victory X 3000” of Perkin Elmer company. For the experiments, we used black 96-well-plates (Greiner #655077). In the first well, we added the reagents of the cell-free system with the Toehold_Switch-30e-5p (4) without the trigger RNA, hsa-miR-30e-5p, to check the stability of the toehold switch. This way we checked that no fluorescence is produced in the absence of the miRNA. In the other wells, we added the toehold switch with the reagents of the cell-free system in the presence of the miRNA in different concentrations from 1nM to 1uM. Finally, in the last well, we added only the reagents of NEB’s cell-free system, as a negative control.

After the reaction, the plate was incubated for up to 4 hours at 37℃. Then, we measured the fluorescence and the results are presented in the graph below: 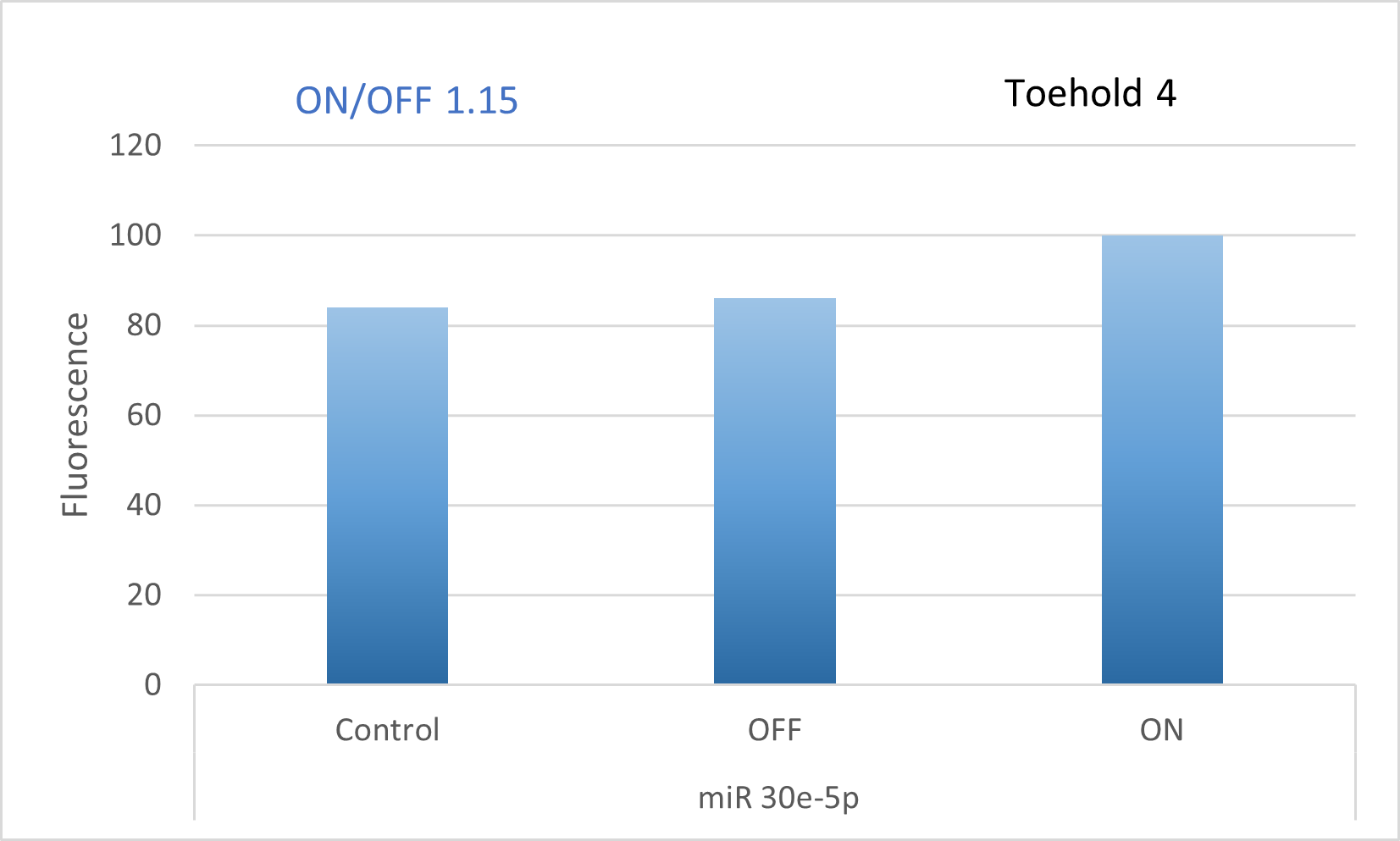