The perm and straightening system without signal peptide

As a composite part, it consists of Panb1-α factor-PepACS-AOX1 Terminator-Pynr071c-α factor-DsbC-AOX1 Terminator- Pynr071c-ROX1-AOX1 Terminator. Panb1, as a constitutive promoter, will express PepACS under any circumstances and keep them inside of the cell without the signal peptide. Pynr071c promoter, as a xylose-inducible promoter, translates and expresses DsbC in the presence of xylose. At the same time, it also induces the expression of ROX1. ROX1 inhibits the Panb1 promoter and blocks the expression of its downstream proteins, thus blocking the synthesis of pigment.

PepACS is consists of several short peptides（PepA, PepC, SPB） with flexible GS-linkers. All these short peptides are coded by genes of keratin from human hair and related protein, which enables PepACS to interact with keratin. AAs seq of PepA: CCQSSCCKPSC AAs seq of PepC: PIYCPPTCYH AAs seq of SPB: LCRALIKRI PepA is hydrophobic (less than 10%). Polarity interactions, for example, could be formed due to reactional groups in its sequence, which enhance its specificity and oriental binding ability. Peptides rich in cysteine may form covalent bonds with keratin in the hair, while some of it could recombine or even break the disulfide bonds of keratin. Cysteine could binds to sulfydryl, which could apparently reduce the disulfide bonds in keratin. When electron receptors, e.g. oxygen dissolved in solution, are available, cysteine residue could form disulfide bonds with them, which are oxidized from the butyl of cysteine. The break down and reform of disulfide bonds is tightly related to the shape of the hair. Instead of alkaline and Sulphur containing relaxers, this peptide thought could be one brand new method of environmentally friendly control of hair shape.

Biologically speaking, human hair is one kind of complex fibers with various of shapes and components. The main ingredient of the hair is keratin, which is a bright structural protein, as a member of intermediate filament superfamily. According to calculation of amino acids constituent, 18% of keratin is cysteine. The hair filament is consisting of three main layers: cuticle, cortex and medulla. The medulla locates in the core area of the hair, which is partly or totally deficient in slender ones. The cortex is the main part of the hair, which consists of huge fiber of intermediate filaments. The helical α-keratin, major part of the intermediate filament, provides mechanic sustaining force. Single fiber in cortex cells is separated by membrane consists of KAPS, which is rich in cysteine but unclear of space structure. The supplementary fiber of keratin is entangled by iron force, hydrogen bonds, Van der Waal’s force and disulfide bonds. Wrapping outside of the cortex, the cuticle is consist of layers after layers of cells, constructing a kind of squama-like structure. Every cuticle cell has respective lower filaments layer, whose protein is entangled by cysteine. 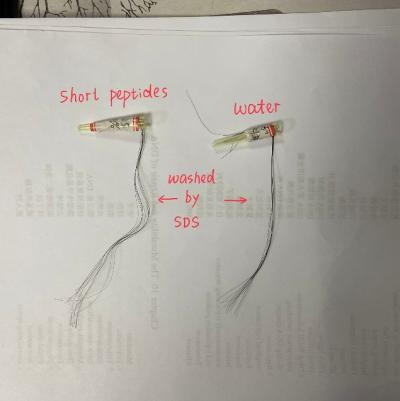 Short peptides perming hair experiment We used 0.1% and 0.01% short peptides for perm experiment, and set chemical perm and up water perm as control group. The perming effect of short peptide is more obvious than that of ultra-pure water, which shows that in alkaline and 50° conditions, the hair cuticle is opened and the longer react time it takes, the better perming result we get. And after a series experiment, we found that hair dealt with SDS can have more obvious curl effect. 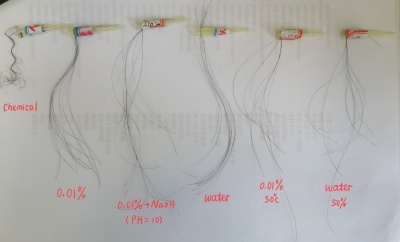 The experimental results showed that the Chemical perm agent had the most obvious effect, while others didn’t have any obvious perming effect. We’ve considered 3 reasons why short peptides have no obvious effect: Maybe the peptides didn’t get into hair cuticle The time for short peptides to form disulfide bonds wasn’t enough The reaction temperature is not enough. So, we get another exploring experiment. Time and Temperature: （1）Drop a drop of 3M NaOH into 0.01% short peptides solution. [PH test paper: PH=10] （2）Control experiment: drop a drop of 3M NaOH into UP water （3）Both react at 50°for 1h. Re-explore a better condition for short peptides perming hair 1）immerse 10 hairs in SDS 3 times to remove charges on hair surface. 2）Wash and put them in 0.01% short peptides solution 3）Control experiment: Up water, the subsequent processing steps are the same as 1)2) 4）both:50°,1h

Perming hair stress experiment We used different kinds of perms for hairs with 2 groups of different hair, and the hair strains will be damaged after perming. So we designed and conducted stress experiments to test the mechanics of the hair after perming. The figure below shows the experiment data, by which we can know that perming by short peptides will have very little damage to the hair, and short peptide perm damage is less than chemical perm. Moreover, the results of the damaged hair groups showed that the damage of short peptide perm is much smaller than that of chemical perm. Hence, we speculated that perming procedure would cause some damage to hair, but the use of short peptide perm could be used to repair the damaged hair. 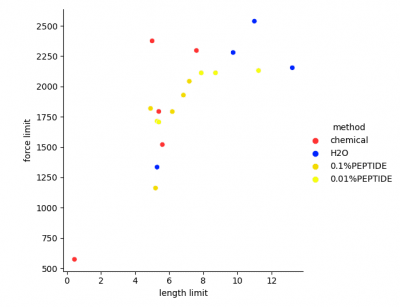 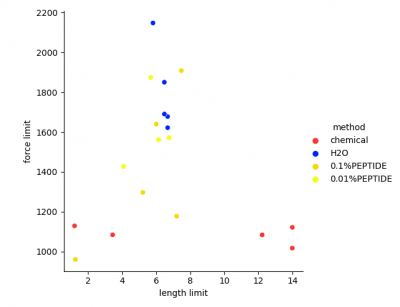 This set of data comes from a pulling test of damaged hair. It is shown in this figure that both sets of hairs that use short peptides for perm can withstand more pull than the hairs after chemical perm. And there isn’t much difference between the results of short peptide group and that of the water group. We speculate that short peptides can by some means repair the damaged hair, which also portrays the excellent performance of short peptide perm that it can protect the hair and maintain the hair quality.