The synthesis and decolorization system of indigo

As a composite part, it consists of Panb1-α factor-FMO-AOX1 Terminator-Pynr071c-α factor-Laccase-AOX1 Terminator- Pynr071c-ROX1-AOX1 Terminator. Panb1, as a constitutive promoter, will express FMO under any circumstances and secret them out of the cell through the signal peptide, α-factor. When the substrate, indole, is added, it reacts in order and catalyze indole into indigo. Pynr071c promoter, as a xylose-inducible promoter, translates and expresses laccase in the presence of xylose. Laccase oxidizes indigo to colorless substances. At the same time, it also induces the expression of ROX1. ROX1 inhibits the Panb1 promoter and blocks the expression of its downstream proteins, thus blocking the synthesis of pigment.

Copper atom is usually contained in the laccase, which is one of the common characters of laccase and maintains its oxidizing/reducing reaction. As the key element of reaction center, copper atom is critical to the activity and specificity of laccase since it exists in the area that binds substrate and breaks & forms chemical bonds. According to crystal structure of laccase, most have 3 copper binding sites which bind 4 copper atoms. Laccase has a wide variation of substrates, which includes phenol, aniline, carboxylic acid (and their derivatives), bio-pigments, lignans, organic metal compounds and other non-phenol compounds. The optimum temperature of laccase is relatively low, while it has the maximum catalyzing efficient among environment of low pH. These characters give laccase a promising prospect in food industry, paper industry, textile industry and bio-repairing of soil. Coriolus versicolor from Aphyllophorales, Aphyllophorales, Hymenomycetes, Basidiomycota, is one of the ideal strains which is used for laccase production and have excellent degradation ability to lignans. Laccase in plants is involved in various botanic metabolism pathways, such as synthesis of lignans, synthesis and degradation of pigments and elongation of roots. 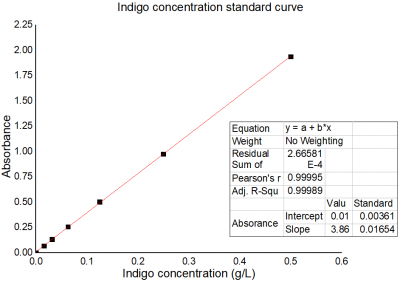 Indigo: Difficult: we can make indigo paste, but the hair does not dye well. Solution: Indigo is a water-soluble component, and need to be oxidized to indigo after fixing to the hair. With water-in-oil paste as the matrix, indigo white can not fully enter the interior of the hair, and the oily substances in the matrix and excessive reductant prevent indigo white from oxidation in the hair, resulting in no effective coloring. So we decided to design a timely manner in which indigo could be produced and used at the same time. Therefore, we consider that indigo dye can be produced and used in time -- the direct production of indigo by yeast, and the production of indigo solution as a dye in time. For this idea, we dye indigo solution directly on the hair and find that it can be painted, but it can not color the hair evenly. So we designed a hair dye comb to make it possible to evenly smear indigo cryptosomes on the hair. The matching device is a timely fermentation tank, which can meet the needs of users with our engineering bacteria as raw materials, timely production and timely use of indigo white. For detailed information, please refer to Hardware part. 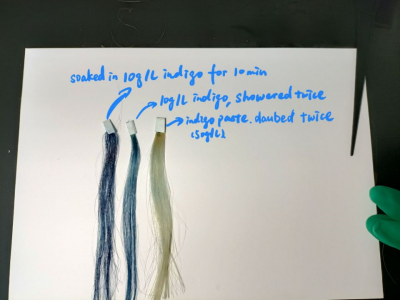 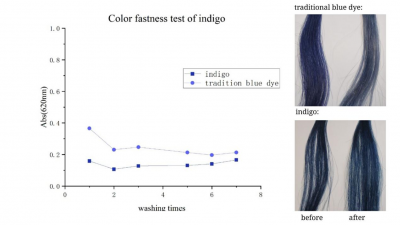