This is a composite part for extracellular expression of curcuminoid synthase. CUS is expressed and participates in the production from p-Coumaroyl-CoA and malonyl coenzyme to curcumin. Panb1 is a constitutive promoter in yeast, which is expressed under anaerobic conditions, while under aerobic conditions, Panb1, as a repression target of ROX1, is inhibited. When Panb1 initiates the expression, the signal peptide, α-factor, is used to express CUS outside of the cell.

Curcumin is synthesized sequentially by two different type III polyketone synthase (PKS) in curcumin rhizome, which is named dipeptide CoA synthase (DCS) and curcumin synthase (CURS). In addition to the DCS/CURS biosynthesis system in curcuma rhizome, we also found and characterized another type III PKS in rice plant Oryza sativa, curcumin synthase (CUS) . The synthesis of curcumin catalyzed by CUS is as follows: firstly, p-gumaryl-CoA and malonyl-CoA are condensed to form dipeptide-CoA intermediate. The synthesized dipeptide CoA condensed with another p-coumaryl CoA to synthesize didemethoxycurcumin. CUS itself catalyzes both reactions of DCS/CUS, so the CUS system is simpler than the DCS/CURS system. In this respect, CUS is a better enzyme than DCS/CURS and is used in the metabolic engineering of curcumin in microorganisms. Besides. CUS can produce cinnamyl methane and curcumin from cinnamyl CoAn and ferulyl CoA . 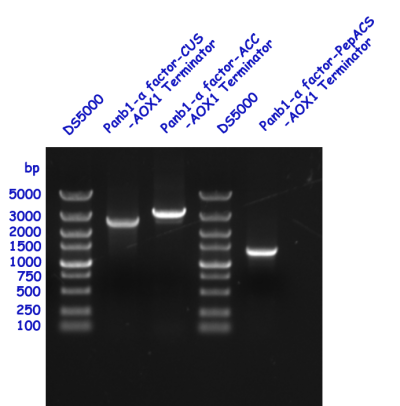