This is a composite part for extracellular expression of phytoene desaturase. crtl is expressed and participates in the production from all-trans plant alkene to all-trans lycopene. Panb1 is a constitutive promoter in yeast, which is expressed under anaerobic conditions, while under aerobic conditions, Panb1, as a repression target of ROX1, is inhibited. When Panb1 initiates the expression, the signal peptide, α-factor, is used to express crtl outside of the cell.

crtI, which is derived from Erwinia, encodes octahydrolycopene dehydrogenase (PDS) and participates in the synthesis of carotenoids. The early steps of carotenoid biosynthesis pathway include the synthesis of Geranylgeranyl pyrophosphate (GGPP), the condensation of two GGPP molecules to octahydrolycopene, and then desaturating octahydrolycopene into plant fluorene, β-carotene, protolycopene and lycopene. crtI encodes octahydrolycopene dehydrogenase, which is responsible for the desaturating reaction from trans boyanic alkene to trans lycopene.
The most important function of carotenoid pigments, especially carotene in advanced plants, is the protection from photooxidation. In the pathway of carotenoid synthesis, only crtI can convert octahydrolycopene to lycopene, and catalyze the desaturation from trans botanic alkene to trans lycopene. In this transformation process, lycopene was synthesized through four consecutive desaturations of intermediates of fluorene phytic acid, β-carotene and prolycopene. However, limited information can be obtained on the enzymes and genes of carotenoid biosynthesis, because the enzyme produced by crtI is immediately inactivated by separation from the membrane environment, thus preventing its purification and the subsequent cloning of the gene that encodes it. 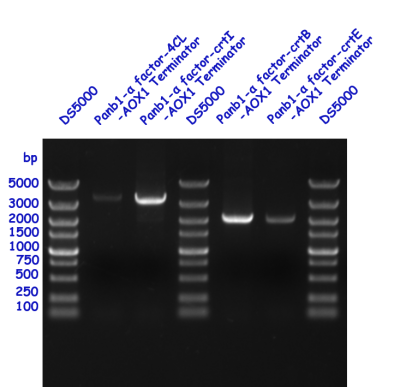