This is a composite part for extracellular expression of FMO dimer. FMO dimer is expressed and participates in the production from indole to indigo. FMO dimer is reported to be more efficient than FMO. Pynr071c is the promoter of Aldose 1-isomerase superfamily protein YNR071C. In the presence of xylose, the signal peptide, α-factor , is used to express FMO dimer outside of the cell.

FMOs exist in the cell as a complex with a reduced form of the prosthetic group and NADPH cofactor, readying them to act on substrates. The 4-hydroperoxyflavin form of the prosthetic group represents a transient intermediate of the monooxygenation process. The oxygenated and reduced forms of the prosthetic group help stabilize interactions with cofactor and substrate alternately to permit continuous enzyme turnover.
Whereas the enzyme–FAD and enzyme–FAD–NADPH complex structures have one dimer per unit cell of the P1 symmetry, the enzyme–FAD–methimazole complex has two. No conformational changes were evident when the three structures were compared in detail, permitting refinement with no crystallographic symmetry restraints. 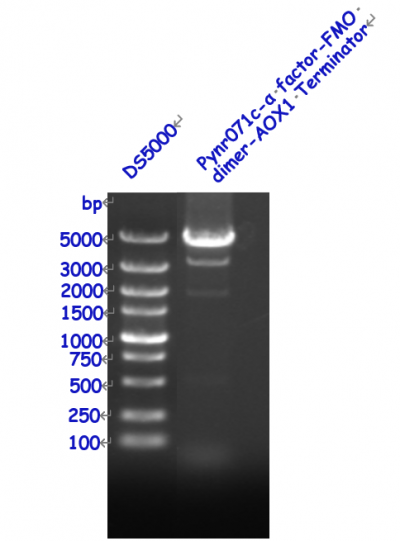 The bands of FMO dimer (less than 5000bp) and is identical to the theoretical lengths of 4600bp estimated by the designed primer locations (promoter to terminator), which could demonstrate that these target plasmid are successfully constructed. After electrotransformed the FMO dimer into yeast, we still used Colony PCR to confirm the target gene is successfully transformed into the yeast cells. 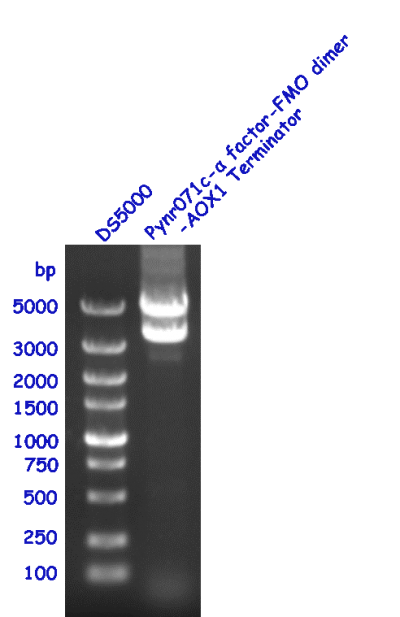 The bands of FMO dimer (less than 5000bp) and is identical to the theoretical lengths of 4600bp estimated by the designed primer locations (promoter to terminator), which could demonstrate that this target plasmid had successfully transformed into yeast.

At first, we tried to detect the protein in the supernatant, but no results were obtained. Because we have already experienced similar problems. We extracted the total protein directly and go for a purification to tested whether it was in the cell. Actually we detected the protein this time but it was smaller than expected. 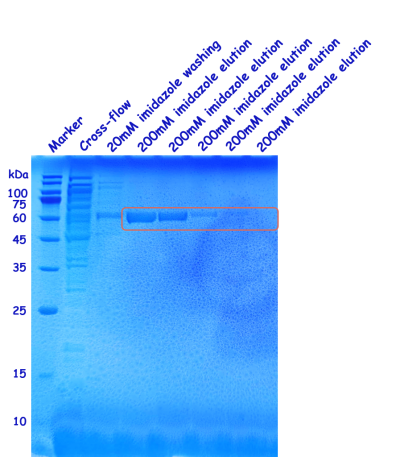 Different from impure or permeate bands, the target protein located around 60kDa, smaller than the theoretical 107.52kDa, but similar to the theoretical molecular weight of FMO (53.96kDa). This indicated that the FMO dimer was broken in the process of expression or extraction. In order to confirm whether the catalytic effect is better, we also added indole to its medium to observe its effect on indigo synthesis.