This is a composite component for expressing PepACS outside the cell. PepACS is transcribed and translated into a peptide consists of three short peptides: PepA, PepC, SPB with flexible GS-linkers，which is the key protein for perming. AOX1 promoter is a strong promoter induced by methanol. Under the condition of methanol induction, with the help of α factor, PepACS is translated and excreted from the cell.

PepACS consists of several short peptides（PepA, PepC, SPB） with flexible GS-linkers. All these short peptides are coded by genes of keratin from human hair and related protein, which enables PepACS to interact with keratin.
AAs seq of PepA: CCQSSCCKPSC
AAs seq of PepC: PIYCPPTCYH
AAs seq of SPB: LCRALIKRI
PepA is hydrophobic (less than 10%). Polarity interactions, for example, could be formed due to reactional groups in its sequence, which enhance its specificity and oriental binding ability. Peptides rich in cysteine may form covalent bonds with keratin in the hair, while some of it could recombine or even break the disulfide bonds of keratin. Cysteine could binds to sulfydryl, which could apparently reduce the disulfide bonds in keratin. When electron receptors, e.g. oxygen dissolved in solution, are available, cysteine residue could form disulfide bonds with them, which are oxidized from the butyl of cysteine.
The break down and reform of disulfide bonds is tightly related to the shape of the hair. Instead of alkaline and Sulphur containing relaxers, this peptide thought could be one brand new method of environmentally friendly control of hair shape.

Biologically speaking, human hair is one kind of complex fibers with various of shapes and components. The main ingredient of the hair is keratin, which is a bright structural protein, as a member of intermediate filament superfamily. According to calculation of amino acids constituent, 18% of keratin is cysteine. The hair filament is consisting of three main layers: cuticle, cortex and medulla.
The medulla locates in the core area of the hair, which is partly or totally deficient in slender ones.
The cortex is the main part of the hair, which consists of huge fiber of intermediate filaments. The helical α-keratin, major part of the intermediate filament, provides mechanic sustaining force. Single fiber in cortex cells is separated by membrane consists of KAPS, which is rich in cysteine but unclear of space structure. The supplementary fiber of keratin is entangled by iron force, hydrogen bonds, Van der Waal’s force and disulfide bonds.
Wrapping outside of the cortex, the cuticle is consist of layers after layers of cells, constructing a kind of squama-like structure. Every cuticle cell has respective lower filaments layer, whose protein is entangled by cysteine. 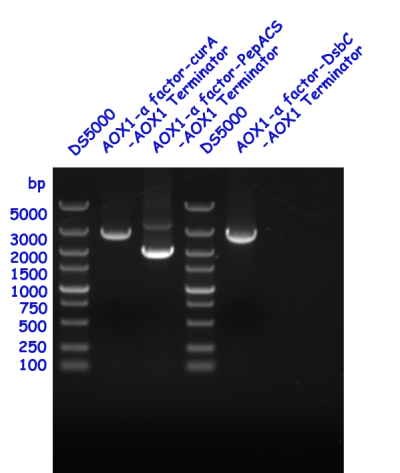 The bands of AOX1-α factor-curA-AOX1 Terminator (almost 3000bp), AOX1-α factor-pepACS-AOX1 Terminator (almost 2000bp) and AOX1-α factor-DsbC-AOX1 Terminator (almost 3000bp) from colony PCR are identical to the theoretical lengths of 2875bp, 1987bp and 2722bp estimated by the designed primer locations (promoter to terminator), which could demonstrate that these target plasmid had successfully transformed into E.coli.
Using E.coli for amplification, we extract and digest them with Bgl I or Sal I to get linear plasmid, which could be integrated into yeast genome to avoid getting lost while being frozen. Then, concentration of linear plasmid is also applied to achieve higher copy number and higher expression level. Several rounds of electroporation later, we successfully get all the plasmid with AOX1 as promoter into yeast. 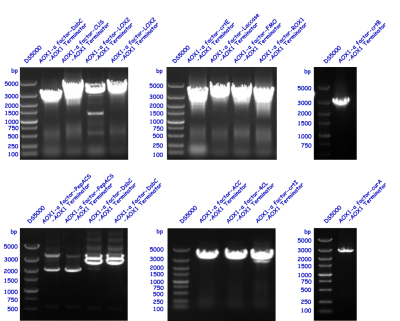 Figure2: Colony PCR result of yeast after electroporation through electrophoresis

Because the molecular weight of PepACS is only 5.08 kDa, it is almost impossible to separate from bromophenol blue, and its migration is also greatly affected, so the position of the band is not accurate. In order to judge whether it was expressed or not, we first filtered the miscellaneous proteins through 10kDa ultrafiltration tube, then concentrated it with 3kDa ultrafiltration tube, and then detected it by SDS-PAGE. Judge whether it is expressed successfully by whether there is coloring near the bottom line.

There are irregular staining bands on the bromophenol blue line in the PepACS swimming lane. Although the molecular weight is not accurate, the successful expression can be judged according to the detection method we designed.