This biobrick consists of multiple parts; An endoplasmic reticulum import signal peptide from the Saccharomyces cerevisiae cell wall integrity and stress response component 1 (Wsc1). The transmembrane domain of Wsc1, as well as the transcriptional activation domain of VP16 from herpes simplex virus linked to the LexA DNA binding domain from Escherichia coli. The transmembrane domain and synthetic transcription factor are linked by a flexible GS linker followed by a seven amino acid consensus sequence (ENLYFQŌĆÖG) for the cut site for Tobacco Etch Virus Nuclear Inclusion protein a (TEV protease).

The sequence was codon optimized for S. cerevisiae. The recognition sequences for SpeI, XbaI, NotI, EcoRI, PstI were avoided to follow the RFC10 standard. 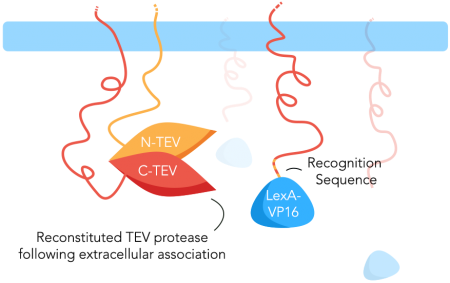 Both the signal peptide and transmembrane domain stem from the S. cerevisiae cell wall integrity sensor Wsc1. As described by Ivanusic et al. 2015, they are commonly used in yeast-two-hybrid assays of membrane protein-protein interactions as a way to increase the likelihood of plasma membrane localization of proteins.

In order to test the functionality of the biobrick it was expressed in S. cerevisiae together with a TEV protease under the control of the galactose inducible scGAL1 promoter, and the NanoLuc luciferase reporter, an enhanced version of luciferase, under control of the (6x)lexAop-eno1 promoter. In the absence of galactose, no TEV protease should be present, and the LexA-VP16 transcription factor should remain membrane-bound. However, in the presence of galactose expression of the TEV protease would be initiated resulting in cleavage of the linker region and release of the LexA-VP16 transcription factor.

The strain was incubated in both the presence and absence of galactose. Subsequently, proteins were extracted from the cell cultures using YeastBuster, an industrial protein extraction reagent for a fast extract of active proteins from yeast without mechanical disruption or enzymatic lysis, and a luminescence assay was performed in order to analyze luciferase expression (Figure 2). 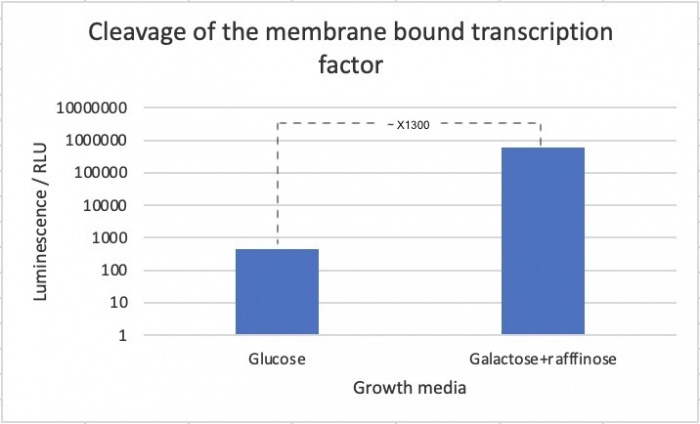 As seen in the figure, a 700-fold increase in luminescence was seen after induction of the TEV protease. This strongly suggests that the biobrick works as intended. However, we cannot exclude that part of the difference in luciferase concentrations stems from other effects of changing the media.

A 700-fold increase in luminescence intensity was observed following expression of the TEV protease. This result infers that the biobrick is working as intended.