This biobrick is a part of a two-protein system in Saccharomyces cerevisiae, which is designed for detection of human interleukin-6 and transduction of the signal by means of a reconstituted ubiquitin. Development of split-ubiquitin as a tool for study of protein-protein interactions in vivo was first published in 1994 and has been an essential feature in biologists’ toolbox ever since (source: https://www.pnas.org/content/pnas/91/22/10340.full.pdf). A specific mutation in the N-terminal part protects it from binding spontaneously to the C-terminal part. However, re-association can be facilitated by binding of a pair of proteins to which the ubiquitin parts are fused. Human signal transducer gp130 was expressed in yeast for the first time in 1997 and further improvements paved the way to our own chimeric transmembrane proteins (source: https://pubmed.ncbi.nlm.nih.gov/9271090/).

From N- to C-terminal the protein includes; an endoplasmic reticulum import signal peptide from the S. cerevisiae cell wall integrity and stress response component 1 (Wsc1), The first three domains of the soluble isoform of human interleukin-6 co-receptor, soluble glycoprotein 130 (sgp130). The transmembrane domain from Wsc1, as well as the C-terminal part of the split version of ubiquitin and the synthetic transcription factor LexA-VP16. LexA is a DNA binding domain from Escherichia Coli and VP16 is a transcriptional activation domain from Herpes simplex virus Type 1. Together LexA-VP16 functions as an orthogonal transcription factor in S. cerevisiae. Between the extracellular sgp130 domains and the transmembrane domain, a (2x)GGGGS-linker was added. Between the transmembrane domain and the C-terminal split ubiquitin domain, two basic amino acids (KR), and the (2x)GGGGS-linker was added. 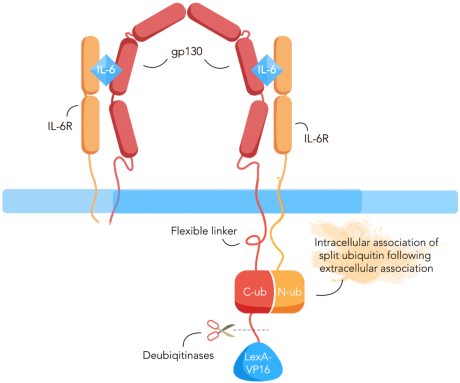 BBa_K361701 (marked in red) is designed to locate to the plasma membrane. Upon IL-6 binding it associates with BBa_K3617000 (marked in yellow), forming a trimeric complex. Following extracellular binding, the two intercellular parts of ubiquitin (C-ub and N-ub) come together forming a full-length ubiquitin. This is then cleaved by a deubiquitinase, triggering the release of the LexA-VP16 synthetic transcription factor.

BBa_K361701 is designed to work together with BBaK3617000 and constitute a functional human IL-6 receptor. BBaK3617001 possesses domains 1-3 out of the 6 extracellular domains of the IL-6 co-receptor soluble glycoprotein 130 (sgp130), the C-terminal part of split-ubiquitin, and the LexA-VP16 synthetic transcription. The synthetic transcription factor is a fusion of the DNA binding domain of the LexA transcription factor from Escherichia coli, and an activation domain from the herpes simplex virus transcriptional regulatory protein VP16. LexA-VP16 is often used in yeast 2 hybrid assays as it does not affect endogenous S. cerevisiae genes, and therefore provide orthogonality. In the presence of interleukin-6, the extracellular domains of BBa_K3617000 and BBa_K3617001 (IL-6R and sgp130) associate, forming a heterotrimer consisting of IL-6, IL-6R, and sgp130. The trimerization causes intracellular complementation of the two ubiquitin parts allowing for recognition by an endogenous deubiquitinating enzyme, which facilitates releases of the transcription factor. The transcription factor then relocates to the nucleus and activates expression of a reporter gene (Figure 1).

In order to investigate the cellular localization of our protein, superfolder green fluorescent protein was fused to the C-terminal end of the protein. Following expression of our new fusion construct, the cells were observed with confocal fluorescence microscopy for visualization.

Figure 2a: Confocal fluorescence microscopy of sgp130(D1-D3)-Cub-sfGFP. Pictures were taken with a 150 μm pinhole. The image shows both a faint localization in the endoplasmic reticulum, and at the membrane, but most of the protein ends up in inclusion bodies/vacuoles. 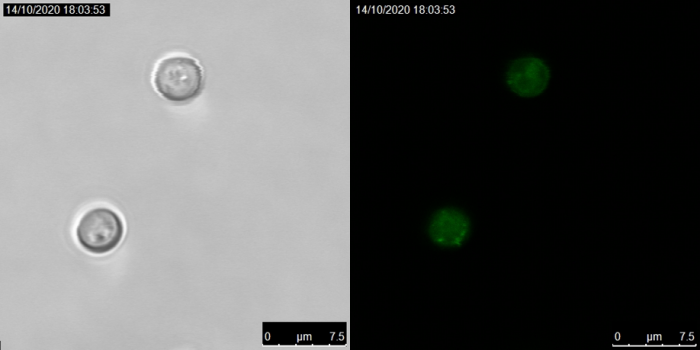 Figure 2b: Confocal fluorescence microscopy of sgp130(D1-D3)-Cub-sfGFP. Pictures were taken with a 150 μm pinhole. The image shows both a faint localization in the endoplasmic reticulum, and at the membrane, but most of the protein ends up in inclusion bodies/vacuoles.

The majority of investigated cells had one or more fluorescent aggregates. These aggregates were predominantly positioned between the nucleus and the plasma membrane, which could indicate the formation of inclusion bodies. For some cells, the fluorescence signal accumulated close to the nucleus. A possible explanation could be that the protein may be stuck in the Golgi apparatus. Previous studies by Vollmer et al. (1999) have shown that removing the N-terminal Ig-like domain of the IL-6 receptor leads to retention of the protein in the secretory pathway. To circumvent this localization issue, one could add back the N-terminal Ig-domain of the IL6-R.

To test the functionality of the part, it was stably transformed into chromosome x site 3 of S. cerevisiae and constitutively expressed by the pTDH3 promoter together with BBa_K3617001. The latter was under constitutive expression by the pPCCW12 promoter. In addition, NanoBit luciferase, which luminesces 100 times brighter than firefly and Renilla luciferase, was also expression under the control of the lexA-VP16 promoter. After growing the cell cultures to an OD600=0,5, the cells were incubated at 30°C with different concentrations of commercially supplied IL-6 for 1, 3, 14, and 22 hours. Proteins were extracted from the cell cultures using YeastBuster, an industrial protein extraction reagent, and a luminescence assay was performed in order to analyze luciferase expression (Figure 3a & 3b)

Cells expressing BBa_K3617000, BBa_K367001, and luciferase under control of the LexA-VP16 promoter, were induced for varying amount of time with different concentrations of IL-6. Proteins were subsequently extracted, and luminescence measured in order to evaluate luciferase expression. 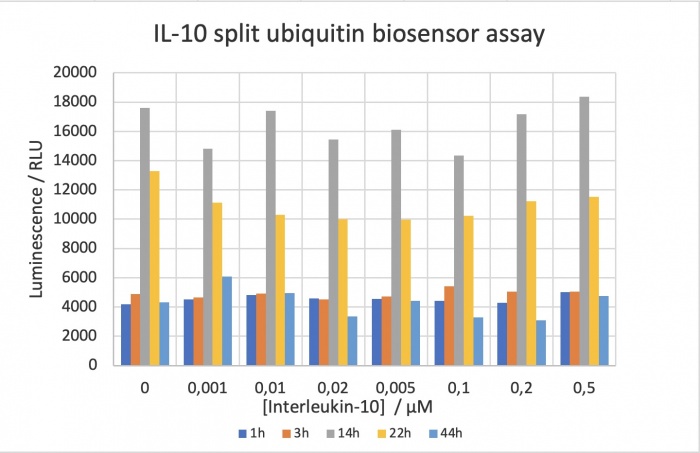 <p align="justify"> Figure 3b: Il-10 split ubiquitin biosensor luciferase assay. </p>
No correlation between IL-6 concentration and luminescence intensity was observed at any time point. This indicates that the biosensor does not work as intended for the concentrations and experimental conditions of the experiment. A similar assay was performed with the IL-10 biosensor strain also developed by the UCopenhagen 2020 team. Compared with the IL-10 biosensor, the amount of luminescence was between 3-10 times higher at all concentrations and incubation times. This suggests that the two extracellular domains have an affinity towards each other even without IL-6. As a result, this also implies that the two proteins produced from BBa_K3617000 and BBa_K3617001 localize to the same subcellular compartment(s). The high amount of luminescence may also be caused by partial degradation of BBa_K3617001, leading to release of lexA-VP16. This could be examined by expressing BBa_K3617001 and reporter gene together, without BBa_K361700. Alternatively, a western blot with primary antibody against GFP could be used on GFP-fusion constructs.