During PCR amplification from mouse genomic DNA a random point mutation occurred that may affect the promoter activity. (nucleotide #770 was replaced from G to A)

In ALS disease, under gliosis conditions astrocyte cells transform from resting to reactive form, this transformation includes the induction of several genes including Six Transmembrane Epithelial Antigen of Prostate 4 gene by pSteap4.[1,2]

We will use this promoter to specifically express CRISPR dCas9 VP64 in order to activate pMLPm promoter that will express reverse Caspase3, by doing so we will be able to induce apoptotic death only in reactive astrocytes and not in the resting cells. By reducing the amount of reactive astrocytes we will prevent motor neuron death and prolong ALS patient survival.

Aiming for expression under pSteap4 promoter specifically in reactive astrocytes, we wanted to validate wheather the cell-line that is used in our experiments, C8-D30, is indeed a good model for A1 reactive astrocytes. Reactivity validation was achieved via immune-staining to known markers (Fig 1). 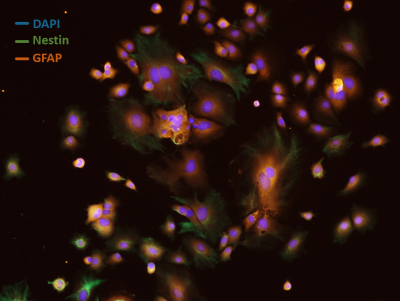 Figure 1: C8-D30 cells stained with DAPI (blue), Nestin (green) and GFAP (Red). Conducted for us on our cells by: Dinorah Friedmann-Morvinski's lab

High expression of GFAP and Nestin proteins is a specific feature of reactive astrocytes, usually appear after various brain injuries [3]. As can be seen in Figure 1, C8-D30 astrocytes cells displayed strong immunostaining signal for both GFAP and Nestin. Therefore, it is possible to conclude that the chosen cell line of C8-D30, is indeed that of reactive astrocytes. It can serve as an accurate model for testing this project hypothesis, and to examine the specificity of pSteap4 promoter.

Promoter assay In order to assess the strength of pSteap4 promoter, we performed a promoter assay in C8-D30 cell-line. We examined the promoter by quantifying the amount of enzyme produced by the Luciferase gene (Fig 2). 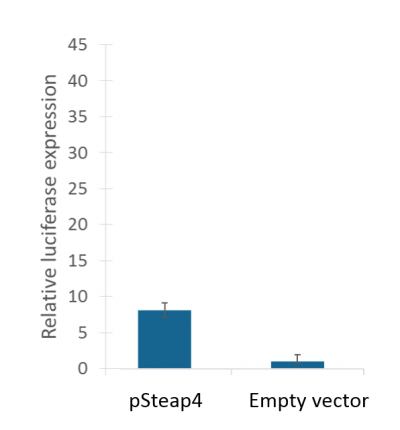 The pSteap4 value is very high when compared to the negative controls of empty vector, which suggest that our promoter is active in our reactive astrocyte C8-D30 cell-line.