In ALS disease , under reactive gliosis conditions astrocyte cells transform from their resting to their reactive form, this transformation includes the induction of several genes including tissue inhibitor of metalloproteinases-1 gene by pTimp1.[1,2]

We will use this promoter to specifically express CRISPR dCas9 VP64 in order to activate the synthetic promoter minimal adenovirus major late promoter (pMLPm) that will express exogenous reverse Caspase3, by doing so we will be able to induce apoptotic death only in reactive astrocytes and not in the resting cells. By reducing the amount of reactive astrocytes we will prevent motor neuron death and prolong ALS patient survival.

Reactivity test by immunostaining of astrocyte cell-line C8-D30 (Conducted for us by: Dinorah Friedmann-Morvinski's lab on our cells)

Aiming for expression under the Timp1 promoter specifically in reactive astrocytes, we wanted to validate whether the cell-line that is used in our experiments, C8-D30, is indeed a good model for A1 reactive astrocytes. Reactivity confirmation was achieved via immuno-staining of known and established markers of reactive astrocytes (Fig 1).

Figure 1: C8-D30 cells stained with DAPI (blue), Nestin (green) and GFAP (Red). Conducted for us on our cells by: Dinorah Friedmann-Morvinski's lab

High expression of GFAP and Nestin proteins is a specific feature of reactive astrocytes, which usually appears after various brain injuries [3]. As can be seen in Figure 1, C8-D30 astrocytes cells displayed strong immunostaining signal for both GFAP and Nestin. Therefore, it is possible to conclude that the chosen cell-line of C8-D30, is indeed that of reactive astrocytes. It can serve as an accurate model for testing this project’s hypothesis, and to examine the specificity of pTimp1 promoter.

In order to assess the strength of pTimp1 promoter, we performed a promoter assay in C8-D30 and BV2 cell-lines. We examined the promoter by quantifying the amount of enzyme produced by the Luciferase gene (Fig 2 & Fig 3). 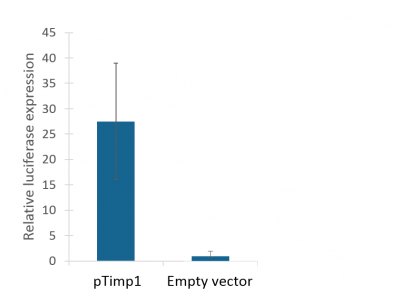 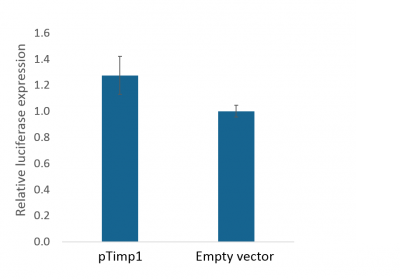 Gene expression due to pTimp1 activity

This part was used by BGU 2018 team in a Lenti-viral vector: pTimp1-dCas9-VP64 construct.

In this construct pTimp1 regulates the expression of dCas9-VP64 fused to Puromycin resistance gene by Thoseaasigna virus 2A peptide (T2A) that is cleaved during translation [4].

C8-D30 cells were infected with this lenti-viral vector. Infected cells survived the antibiotic selection, which means that pTimp1 was active.

Recovering period was very long and due to time limitations, C8-D30 cells were co-transfected with the Lenti-viral vector: pTimp1-dCas9-VP64 and pSynt. dCas9-VP64-gRNA complex targets and activates the pMLPm promoter in our design, otherwise pMLPm promoter remain non-active [5]. This activation has driven pMLPm to regulate the expression of exogenous reverse caspase3 fused to mCherry fluorophore by T2A peptide (Fig 4).

Figure 4: Images of mCherry in C8-D30 cells 24 hours post co-transfection with lenti-viral-vector:pTimp1-dCas9-VP64 and pSynt. A – Bright field. B – Fluorescent microscope .

mCherry expression in C8-D30 reactive astrocyte cells was visible. Demonstrating the activity of our dCas9 editing approach and verifying expression of reverse caspase3. In fluorescent microscope we were able to detect mCherry fluorophore in several cells.

By demonstrating mCherry expression we were able to demonstrate both the specificity of our chosen promoter as well as the ability of our system to drive the expression of caspase3 (through the mCherry marker) we have designed into our plasmid.