This part consists of the theophylline riboswitch followed by M13 bac5teriophage geneIII, flanked by two homology regions for the usage due to the cloning standard of the iGEM Team Heidelberg 2017 (http://2017.igem.org/Team:Heidelberg/RFC). Figure one gives a short overview of our standard. Our BioBricks from the registry can easily be used for the assembly of blasmid with the standard (Fig.: 2). 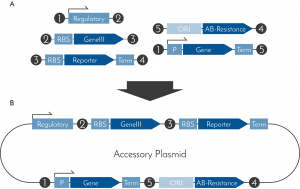 Figure 1: In our cloning standard, compatible building blocks are defined by specific functionalities. They are flanked by defined homology regions, indicated by numbers, which are necessary for the assembly of the APs with the Gibson method. This results in a highly customizable plasmid, composed of the desired origin of replication, an antibiotic resistance (4-5), a bicistronic operon with geneIII (2-3)and the desired reporter (3-4), which can be activated by any promoter (1-2)and a second expression cassette for additional genes that are necessary for the respective circuit (1-5). 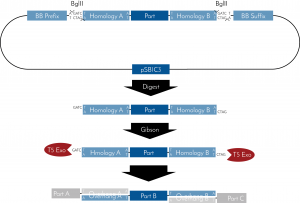 Figure 2: Compatibility of our cloning stadard with the RFC10;Any AP building block can be cloned into RFC[10] standard by inserting BglII sites between the homology regions and the biobrick prefix or suffix, respectively. To use such a part for AP assembly, it has to be digested with BglII. The resulting fragment should be purified and can subsequently used for Gibson assembly with other parts.

Experiments with this Part

Before we could start to evolve the CYP1A2 we first checked whether the enzyme can be expressed in its functional tertiary structure in our E.coli strain. CYP1A2 requires a heme group as cofactor which coordinates iron ions, a fast test using sodium dithionite can be conducted to proof whether the CYP1A2 is properly folded. Thereby sodium dithionite acts as a reducing agent and can be used to quantitatively detect iron ions in aqueous solutions. When sodium dithionite is added to the cell lysate of E.coli cells expressing CYP1A2 and the corresponding chaperone protein HDJ-1 a color change can be detected even by the eye (Fig. 4). Further OD measurement at 550 nm will show a peak, indicating the reduction of iron ions by sodium dithionite [1].

The used PREDCEL workflow in general is described in the PREDCEL protocol (http://2017.igem.org/Team:Heidelberg/Predcel). However, we had to conduct some adaptations for a successful PREDCEL run: Once the culture is grown to an OD600 of 0.6, the Mutagenesis Plasmid was activated by exchanging the initial medium containing glucose (repressing the MP) by medium containing arabinose. Then the culture is inoculated and incubated for three hours to propagate the phages before the supernatant containing the phages is transferred for the first time. After three rounds of passaging, the obtained phage supernatant is used to infect another E.coli strain, ensuring fast propagation of phages without selection pressure over night. This intermediate step prevents a phage washout and ensures a sufficient phage titer that is needed for the inoculation of the next PREDCEL culture. This procedure has to be repeated after each round until the evolution process is completed (Fig. 3). To get to know more about on how phage titers behaves under different conditions, have a closer look on our Modeled Phage Titers page(http://2017.igem.org/Team:Heidelberg/Model/Phage_Titer).

In a first step, we wanted to validate our AP. Therefore, we added theophylline with a concentration of 100 µM to our inoculated culture and performed two rounds of PREDCEL. Afterwards, we determined the phage titers by plaque assays. Our theophylline treated culture displayed approximately two times higher phage titers than the non-treated control culture. Using the same experimental conditions, but replacing the theophylline treatment by a 300 µM caffeine treatment, we verified the functionality of CYP1A2 and thus of our SP. If caffeine is added to the culture CYP1A2 catalyzes the reaction from caffeine to theophylline. The resulting increase of the theophylline concentration further activates the riboswitch on the AP and phage propagation is stimulated (Fig.5). For the evolution of proteins via PREDCEL the addition of a Mutagenesis Plasmid (MP) is essential. For our cytochrome engineering approach we have chosen MP4, which induces a medium mutation rate (Badran et al., 2015). After six iterations of our optimized PREDCEL workflow, we performed plaque assays and sequenced single plaques. The sequenced plaques showed five recurrent mutations demonstrating that we are able to induce mutations with our experimental setup and that we are able to evolve enzymes (Fig.6). 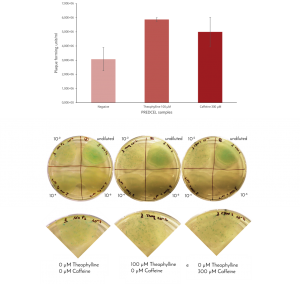