deGFP is a variant of Green Fluorescent Protein (GFP). It was initially designed by Shin and Noireaux (2010) for expression in cell-free protein synthesis systems and is more efficiently translated than other variants. 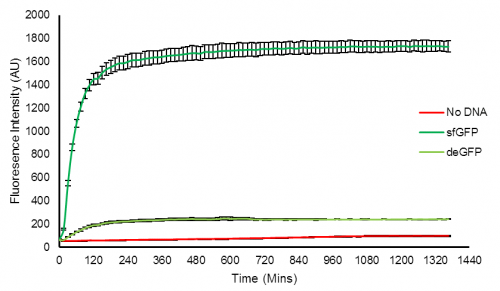 CFPS Expression of J23100-deGFP and J23100-sfGFP Constructs: Time course for increase in fluorescence intensity of CFPS systems expressing GFP constructs over time. Each data point is an average of triplicate results, and error bars show +/- standard error. CFPS system with no DNA (Red) was used as the negative control. The deGFP reporter gene is an important component of synthetic biology, and the expression level of this gene can indicate many interesting characteristics of an experiment, such as sensitivity, leakage, etc. DeGFP synthesis rate differs for the same element in different chassis.
ZJUT-China 2021 found this part in the Parts, but the synthesis rate of deGFP in the Cell-Free system was lower than that in a cell-based system.
As a result, according to promoters and RBS suitable for Cell-Free systems reported in literature, through experiments and modeling, ZJUT-China 2021 found the combination of promoter and RBS that best expresses deGFP, and we registered it as BBa_K3885311 .

Figure 2. Rates of deGFP synthesis in the Cell-Free system, compared with model predictions, for reactions containing one of 3 plasmids, including the combinations of promoters P70a, P70b and P70c with UTRs UTR1, UTR2 and UTR3, at various different plasmid concentrations.


We changed the promoter and measured the synthesis rate of deGFP with the different concentration of the plasmid(Figure 1).
The figure indicates that the intensity of promoter is P70a>P70b>P70c. The relative strength of UTR spans nearly two orders of magnitude.


We changed the RBS and measured the synthesis rate of deGFP with different concentration of the plasmid(Figure 3).
The figure indicates that the intensity of UTR is UTR1>UTR2>UTR3. The relative strength of UTR spans nearly two orders of magnitude. 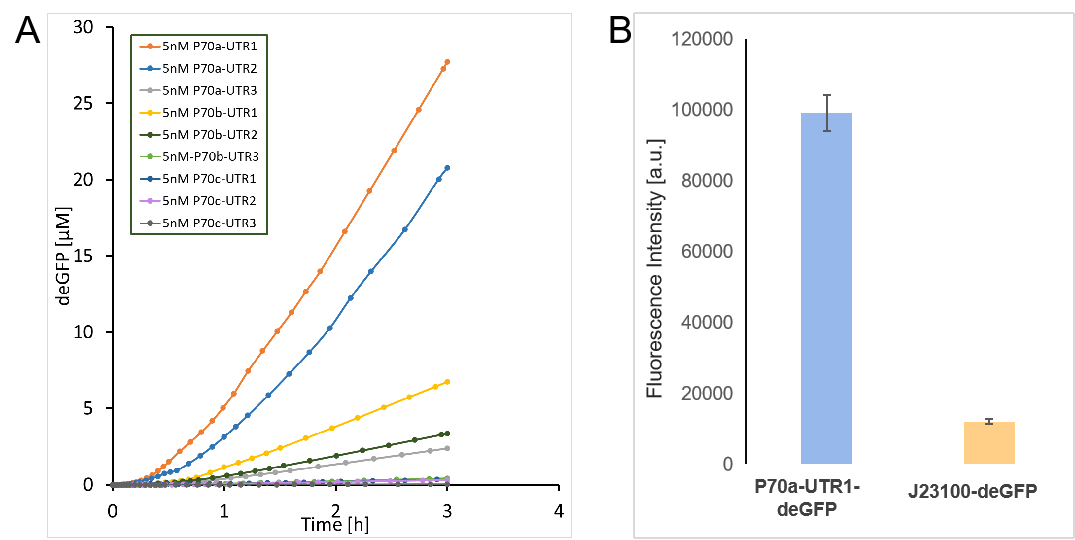 
Finally, the kinetic curves of 9 different combinations of P70 and UTR were analyzed for 3 hours at a plasmid concentration of 5nM (Figure 5. A).
The figure above indicates that P70a-UTR1-deGFP is the best combination for deGFP expression in Cell-Free systems.
Among the 9 combinations, we tested the reaction endpoint of the plasmid J23100-deGFP and P70a-UTR1-deGFP , and it was found that the improved part had a fluorescence intensity that was four times higher than the original part (Figure 5. B).