Antimicrobial peptides (AMPs) are a group of peptides that play roles in the innate immune system to protect the host from invading pathogens [1]. AMPs have minimal toxicity and low sensitivity effects to the host [2], which means antimicrobial peptides have the potential to be used to replace antibiotics in the future. Thus, the detrimental effects of antibiotics overuse will be released.

Cecropins, a group of small AMPs mainly found in the hemolymph of insects, consist of 31 39 amino acid residues and have a broad spectrum, high heat stability and potent bacteriostatic activity [3-5]. CecropinXJ (Part BBa_K1919000) is a member of the Cecropin family, which was first cloned from the larvae of the Xinjiang silkworm (Bombyx mori). Previous researches have determined the complete amino acid sequence of this molecule [6]. It has been demonstrated that CecropinXJ could be expressed in eukaryotic expression system such as Pichia pastoris [7] or prokaryotic expression system such as E.coli [8]. What’s more, CecropinXJ exhibited to have various activities such as antibacterial activity against both Gram‑positive and Gram-negative bacteria, as well as antifungal activity [8]. These characteristics indicate that CecropinXJ is an ideal antimicrobial substance to be used to treat foot diseases caused by microbes.

This part is constructed based on part BBa_K1919000 [1], which express cecropinXJ continuously downstream of constitutive promoter J23105 [2](Fig. 1) 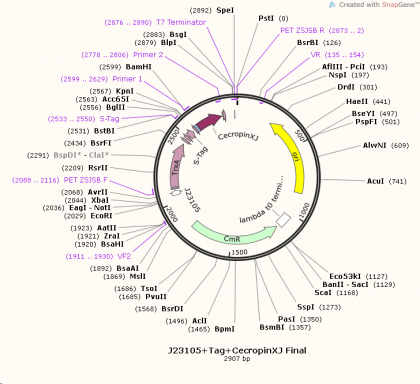 The combination of cecropinXJ and constitutive promoters were determined by PCR. (Fig. 2) However, there is no clear band being detected while using SDS-PAGE and Western blot, which might due to the high level expression of AMP inhibited the growth of host itself.

Fig.2 The result of colony PCR confirmed the successful combination of CecropinXJ and constitutive promoters J23105