It can be seen from the Western Blot results that phaz1 BBa_K1149010 was being expressed. To show that this enzyme has esterase activity, colourimetric assays were performed using the substrate analog para-Nitrophenyl butyrate. When the ester bond in this substrate is cleaved, 4-Nitrophenol is released. This is accompanied by an increase in absorbance at the wavelength 405 nm and a colour change from colourless to yellow. The concentration of 4-Nitrophenol produced could then be calculated with the Beer-Lambert Law, as the extinction coefficient of 4-NP at 405 nm is 18,000 M-1 cm-1. This experiment was performed with both the crude cell lysate and purified PHB depolymerase. Our data shows that this enzyme is definitely active.

para-Nitrophenyl butyrate is cleaved by PHB depolymerase to release 4-Nitrophenol. This is accompanied by an increase in absorbance at 405 nm. Figure adapted from TU Darmstadt 2012 iGEM 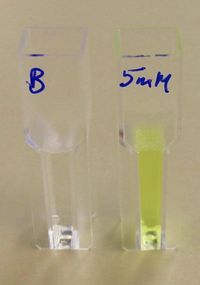 When the substrate para-Nitrophenyl butyrate is added to the reaction mixture of purified PHB depolymerase (phaz1) in phosphate buffer, there is a colour change from colourless to yellow. Figure by Imperial College London iGEM 2013.

After 48 hours of growing and inducing the phaz1 culture, the cells were lysed by probe-sonication, spun down and resuspended in 50mM Tris-HCl buffer. A reaction mixture containing 5 µL of crude phaz1 lysate, 4 µL of para-Nitrophenyl butyrate and 1 mL of 50 mM Tris-HCl pH 7.4 buffer was incubated in the Eppendorf BioSpectrometer for 570 seconds, whilst the absorbance at 405 nm was automatically recorded every 30 seconds. 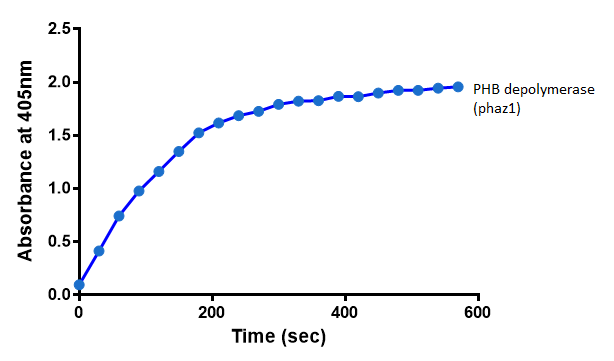 The increase in absorbance that accompanies the cleavage of para-Nitrophenyl butyrate by PHB depolymerase (phaz1). Figure by Imperial College London 2013 iGEM

Since the phaz1 BBa_K1149010 construct contains a His tag, the protein could be purified by metal affinity chromatography. The colourimetric assay was carried out, as with the cell lysate. 100 mM potassium phosphate (pH 7.4) buffer was used instead of the Tris-HCl buffer, to eliminate the esterase activity caused by imidazole in the buffer used previously. Every 30 seconds for 30 minutes the absorbance at 405 nm of the reaction mixture was recorded. The reaction mixture contained 1 ml of phosphate buffer, 2.5 µL of purified PHB depolyermase (stock concentration 0.230 mg/ml) and para-Nitrophenyl butyrate to make final concentrations of 50 µM, 100 µM, 150 µM, 200 µM and 250 µM of substrate. 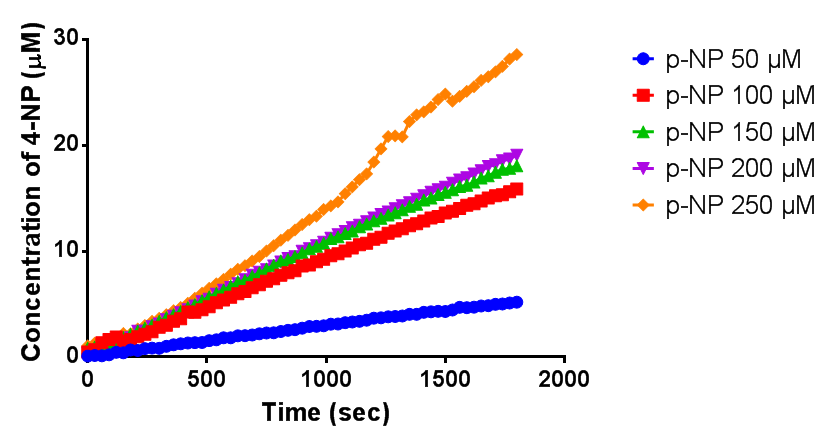 The above graph shows how the concentration of 4-Nitrophenol produced is greater when the para-Nitrophenyl butyrate substrate concentration is greater. This data shows that we have successfully purified active PHB depolyermase. 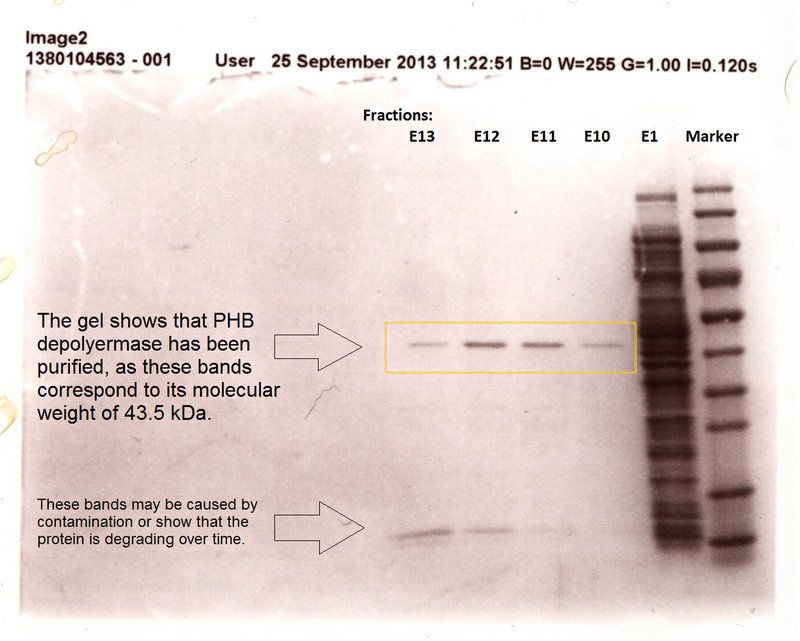 Clearing zone experiment was conducted to semi-quantitatively test the ability of PhaZ1 to break down P3HB. PhaZ1 cell lysate was tested on a P3HB LB agar plate. The protocol can be found here.

We can degrade the PHB made by our own bacteria

In the below experiments we show that: <p>The phaZ1 PHB depolimerase enzyme that we expressed and purified from E.coli is functional.</p> <p>The white and grey "stuff" that we purified in various experiments is Poly-Hydroxy-Butyrate bioplastc.</p> <p>The grey sample was purified from waste, therefore we made PHB bioplastic from waste.</p> <p>We can close the loop and degrade our own bioplastic.</p>

<p>The plastic samples were incubated with phaZ1 enzyme overnight and the 3HB was detected from the samples using a 3HB colorimetric assay kit. Please see the protocol and the data for details.</p> 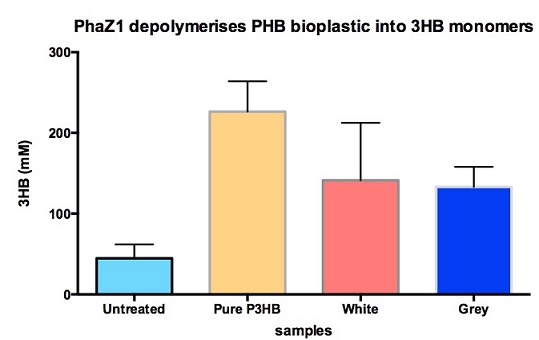 <p> The amount of 3HB monomers freed from the polymer is more in case of PhZ1 treated samples. There is less 3HB produced from the samples that were purified from bacteria than from the pure polymer. This could be because I put less amount in the assay, which I did because there was less available. I put about a 0.1g of grey and white and 0.5 grams of pure PHB.</p>

<p>We do expect to see some background 3HB in the untreated sample since it was in the shaking incubator at 37°C in the Buffer solution. PHB is a bioplastic and degrades spontaneously as well as enzymatically. However, the spontaneous degradation occurs slowly. We have made the process significantly more efficient and we are working on models to predict if this would be industrially scalable.</p>
<p>It is possible to work out how much PHB can be broken down by 1 gram of phaZ1 in an hour:</p> <p>amount of 3HB monomers freed from polymer in average: 153.8 mM in 800uL </p> <p>molecular weight of 3HB: 126.09</p> <p>amount of phaZ1 enzyme: 0.230 mg/ml, I used 10 uL per reaction </p> <p>time was overnight for about 15 hours. </p>

Our Phaz1 construct was tested for induction by addition of Xylose. Phaz1 growth assay. MG1655 E. coli were grown for 6h with 0% and 2% Xylose to induce Phaz1 BBa_K1149010. A two-tailed t-test, with p = 0.4181 shows that there is no significant difference between induction and no induction with regards to growth inhibition, as the value exceeds the critical value of 0.05. Growth was at 37°C in LB with shaking. Error bars are SEM, n=4. Figure made by Imperial College London 2013 iGEM.

Conclusion: There is no growth inhibition caused by induction in Phaz1.