This part expresses a plastic degradation enzyme and sfGFP under the control of arabinose inducible promoter.

The enzyme is the estCS2 from BBa_K892012 previous biobrick by Washington 2012 team, that encodes carboxylesterase that breaks down ester bonds in polyurethane. We have added a pelB seretion tag to the enzyme so that it can be secreted extacellularly. We also added a 6xHistidine tag for Western blotting and protein purification purposes.

Since the PUR Esterases were not secreted, initially the cells were lysed to obtain crude cell extracts in order to test whether the enzymes are active. The Western Blot results showed that the constructs EstC2 BBa_K1149002, PueB BBa_K1149004 and PulA BBa_K1149006 were being expressed. The cultures expressing these three constructs were grown, lysed by sonication and utilised in a colourimetric assay with the substrate analog para-Nitrophenyl butyrate. The data shows that PUR Esterase EstC2 BBa_K1149002 is definitely active.

para-Nitrophenyl butyrate (p-NP) is commonly used to indicate an enzyme’s esterase activity. The enzyme cleaves the ester bond and releases the 4-nitrophenol (4-NP), thus causing a colour change from colourless to yellow and an increased absorbance at wavelength 405 nm.

para-Nitrophenyl butyrate is cleaved by Esterases to release 4-Nitrophenol. This is accompanied by an increase in absorbance at 405 nm. Figure adapted from TU Darmstadt 2012 iGEM

The assay was run in the Eppendorf BioSpectrometer was used to automatically read the absorbance of the reaction mixture every 30 seconds. The concentration of 4-Nitrophenol produced from the reaction was calculated using the Beer-Lambert Law; the extinction coefficient of 4-NP is 18,000 M-1 cm-1 at 405 nm. [1]

The results below show the concentration of 4-NP produced by the three different PUR esterases and compare them to the Empty Vector and Substrate alone as negative controls. 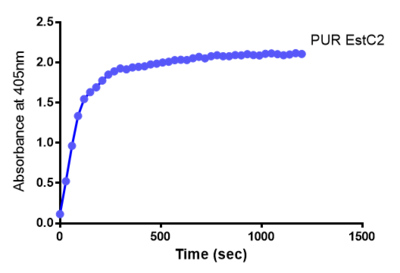 The increase in absorbance that accompanies the cleavage of para-Nitrophenyl butyrate by PUR Esterase EstC2. Figure by Imperial College London iGEM 2013 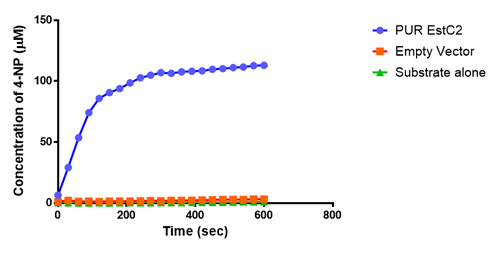 Our PUR-ESTCS2 construct contains sfGFP within an operon and therefore fluorescence can be utilised to determine if expression is being induced by addition of Arabinose. ETSCS2 growth assay. E. coli (MG1655) transformed with ESTCS2 BBa_K1149002 were grown with either 0 μM or 6 μM Arabinose to induce ESTC2 and sfGFP expression. The growth curves appear very similar, which is confirmed by a two-tailed t-test p-value = 0.8118, thus no reason to say that there is any growth inhibition. Growth was at 37°C in LB with shaking. Error bars are SEM, n=4. Figure made by Imperial College London 2013 iGEM. ETSCS2 induction assay. E. coli (MG1655) transformed with ESTCS2 BBa_K1149002 were grown with either 0uM or 6uM Arabinose to induce ESTC2 and sfGFP expression. Induction by Arabinose produces a strong response, with induced transformants fluorescing more. Growth was at 37°C in LB with shaking. Error bars are SEM, n=4. Figure made by Imperial College London 2013 iGEM.

Conclusion: There is no growth inhibition caused by induction, but initially fluorescence from induction is elevated in PUR-ESTCS2.