AhpCp2D1 is a ROS-induced promoter controlled by OxyR (transcription factor) which is activated by ROS (Reactive Oxygen Species). 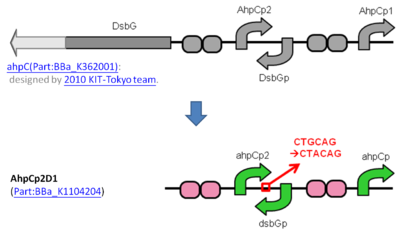 In this part,the PstI cutting site in ahpC (BBa_K362001) is mutated at one point, and the Dsbg coding sequence is removed.

Here is the overview about the other ahpC promoter (Part:BBa_K362001) related improvements:

Not only for sensing the midgut oxygen stress caused by Nosemasis, in our project, there are some previous iGEM team who used OxyR-induced promoter, such as 2010 KIT-Tokyo team using it for the ink of E.coli Pen colorful. And those OxyR-induced promoters relative to the projects.

Since ROS is a natural byproduct of the metabolism and have important roles in cell signaling and homeostasis, the improvement of ROS-induced promoter is useful for sensing some specific conditions. ROS is found to involve in cancer, aging and apoptosis. Thus ROS-induced promoter in the future application can be apply to diagnosis and therapy of certain kinds of physical phenomena or disease.