Not Released
Sample In stock
Experience: None
Not Used
1 Twin
Get This Part

KU_Leuven 2013 requested the BBa_J45700 brick from MIT 2006 and recloned into the pSB1C3 standard plasmid backbone. For the assembly of this part we refer to the original MIT brick BBa_J45700 => "We assembled a complete wintergreen odor biosynthetic system (BBa_J45700) by combining the salicylic acid (BBa_J45320) and wintergreen odor generators (BBa_J45120). BBa_J45700 catalyzes the conversion of the cellular metabolite chorismate to methyl salicylate or wintergreen odor." control: BL21(DE3) without plasmid and antbiotics

Samples were analyzed with a calibrated Autosystem XL gas chromatograph with a headspace sampler (HS40; Perkin-Elmer, Wellesley, Mass.) and equipped with a CP-Wax 52 CB column. Headspace GC was performed on pure MeS (Sigma-Aldrich) (A), on culture supernatant from a E. coli BL21 strain harbouring BBa_K1060003 without (B) or with 0.1 mM salicylic acid (C). MeS could be detected at 12.832 minutes in (A) and (C) but not when no salicylic acid was added. (For more details please go to here.) 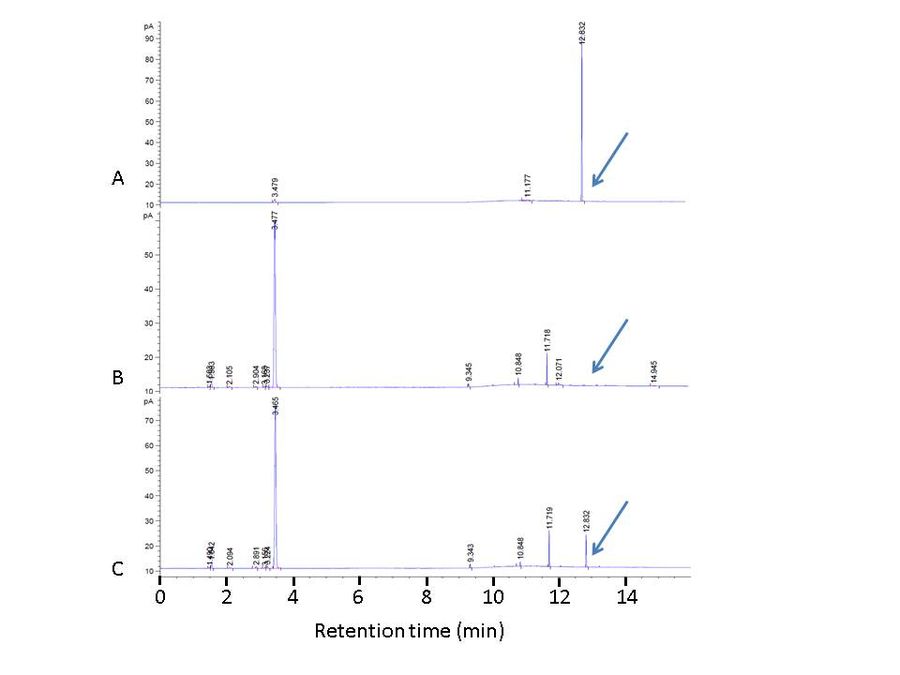 Total ion count (TIC) and extracted ion (EIC m/z 120+152) chromatograms of hexane extract of an E. coli BL21 culture harbouring brick BBa_K1060003 without (A) and with 0.1 mM salicylic acid (B). The mass spectrometer was turned off between 14.5-16 min. to avoid the measurement of extremely abundant peak (which was identified as indole). MeS could be detected at 13.6 min. Inset: measured spectrum at 13.6 min, confirmed as MeS (C8H8O3). MeS (Sigma-Aldrich, M 6752) was used as a standard. MeS was detected as a pure peak with a retention index of RI = 1198 (lit. 1191). Ethyl acetate extractions of LB cultures (either controle BL21, BBa_K1060003 or BBa_K1060003 with 0.1 mM salicylic acid (SA) supplemented in the medium) were measured in SCAN-modus with a splitless injectie of 1 µl. No MeS was detected in the controle sample (BL21) but in both other samples MeS was present. For the sample without addition of SA, just a small amount of MeS could be observed. Similar to our set-up for the EBF synthase protein expression, we tested the MIT biobrick (BBa_J45700) and our novel MeS construct via protein expression. We transformed our constructs in an E.coli expression strain, grew them at various temperatures (room temperature and 37 degrees celcius) and induced expression with increasing amounts of IPTG. We also added salicylate or chorismate to the growth medium in an attempt to increase MeS production.

The figure shows results obtained with the BBa_J45700 brick. Our biobrick showed similar results (data not shown). Increasing the amount of IPTG did not influence the protein expression profile (compare lanes a-d or lanes e-h) but we do see some bands in the lanes a-d which we cannot see in lanes e-f (eg a band just above 55 kDa). Nonetheless, this observation can be verified with lower amounts of the protein extracts. Nonetheless, our smell test would suggest that the MeS brick does work. Hence, we need a more sensitive approach to identify the protein production of the MeS brick. Possible approaches would be via classic western blot experiment or a GC-MS set-up. 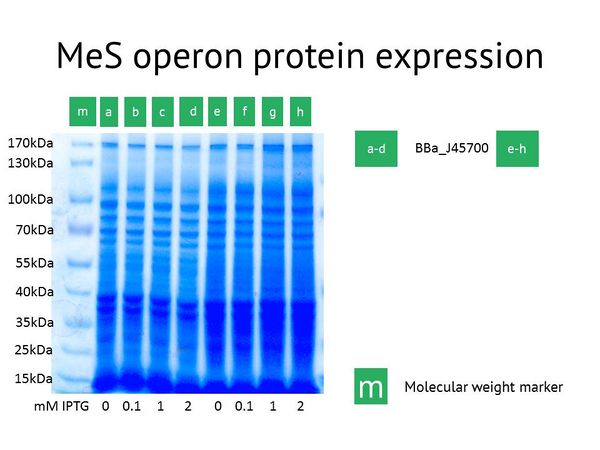 To test this device several setups for smell tests where made. In the graph shown here the samples were incubated for 24h at 37°C. Methyl salicylate (MeS) has a wintergreen odor and can be detected by scent. 11 people smelled each sample independently of one another and answered if they could smell MS or not. For more details on the experimental setup and a discussion of the results go here under 'smell test'. Chorismate was added to test the salicylate production (BBa_J45320) and salicylate to test the wintergreen odor generator (BBa_J45120). Here we tested and compared the activity of the original MIT 2006 Brick (BBa_J45700 and our Brick under different conditions via a blind smell test (11 participants). The MeS (wintergreen) smell got stronger from 8 to 24 hours incubation time. Growing bacteria at 37 °C also produced a more pronounced smell than those at room temperature. Addition of salicylate positively affected the smell, independent of the incubation time. The chorismate effect became only noticeable after 24 hours.

As we recloned this part into the standard pSB1C3 backbone, in the sense of ease of use, we improved the brick BBa_J45700.