This part works together with BBa_K1054017. Membrane scaffolds with split EGFP fragments FA and FB are fused to the periplasmic end.

When 19-mer and 25-mer biotin-modified aptamers are added to the solution and thrombin is present, aptamers act like a bridge linking streptavidin-fused membrane scaffolds and thrombin. In this way, two molecules of membrane scaffolds are pulled together and the two residuals of EGFP meet each other again to become an integrity part capable of giving green fluorescence.

Fluorescence with or without aptamers. BL21 competent cells were co-transformed with FA, FB and protein E. When the OD-600 value reached 0.4, 0.4% was added to induce the expression of protein E. 2h later cells were harvested and washed two times with PBS. 5µL of bacteria were resuspended in 200 µL PBS, and a final concentration of 0.2nM thrombin was added to the solution. Different aptamers were also included in this point. The reaction system was incubated with shaking in room temperature for 30 min and then green fluorescence was viewed under confocal microscopy. 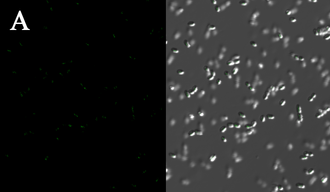 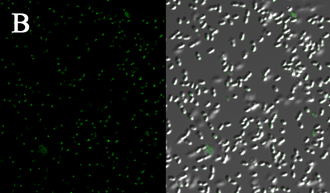 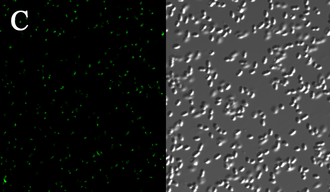 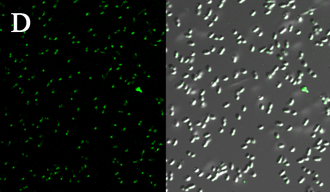 Only very weak green fluorescence was visible when no aptamers were added to the reaction system (A). Biotinylated thrombin can readily induce membrane scaffolds dimerization because there were typically 1-4 biontin in one molecule leading to scaffolds crosslinking (B). 15-mer and 29-mer aptamer with short (C) or long (D) linkers were both effective in inducing crosslinking. But it seemed that long linkers (D) is more potent than short linker (C) in this system.