This part codes for the peptide 'Signiferin' tagged with 'His-6-SUMO' molecule. Its production is triggered by IPTG (through pT7 promoter).

A gene was constructed in such a way that the SUMO-peptide production was driven by the strong T7 phage promoter. This gene containing plasmid was harbored in a BL21(DE3) strain that has lac promoter driven T7 polymerase. Upon induction by IPTG the SUMO peptide fusion is produced as a soluble protein fraction. 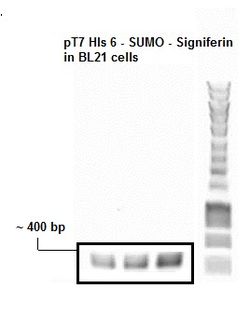 The presence of plasmid with gene inserts encoding the SUMO-peptide (BBa_K1022102) was confirmed by a colony pcr. The expected size of the insert with the T7 promoter was approximately around 400 bp which was clearly evident from the agarose gel picture. An Eurogentec Smartladder MW-1700-10 (https://secure.eurogentec.com/uploads/TDS-MW-1700-10.pdf) was used to identify the size of the fragments. 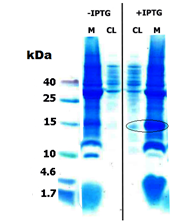 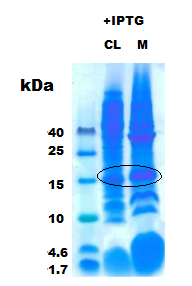 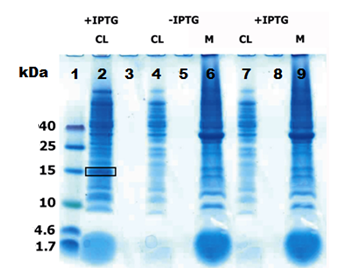 Then just the induced CL and M were run with 30 µg of total protein per well as in figure 3 the results were again consistent (Black circle). One of the over-expressed band was excised and subjected for in-gel tryptic digestion and then to MS/MS measurement in Q-trap MS instrument (Thermo Scientific). To prove the solubility of the peptide the the CL and M from constructs that express peptide without SUMO was run with the CL from SUMO- peptide as in figure 4.

The SUMO domain was added to the peptide to improve its solubility [1]. This was really evident from the figure (2, 3). The peptides without SUMOylation did not have any over-expression in the cell lysate which is clearly seen in the figure 4 [ lanes 4,6 (uninduced) 7,9 (induced)] . But when a SUMO fusion of the same peptide was expressed they appeared as a thick band in the cell lysate as in the figure 4 [lane 2,black box] . From the figures [2,3] it is evident that there was some fraction of protein left with the cell debris. This clearly explains that SUMO does not increase the solubility to 100 % but just enhances the fraction of the soluble protein, thus facilitating easy purification. The band which was subjected to the MS/MS measurements clearly gave a 95 % sequence coverage to SUMO-peptide (signiferin) as in Fig 5. Thus, we prove that the SUMO increases the solubility and also they are not toxic to the cell.

An important part of the project is inhibition of growth or killing of bacteria with the use of antimicrobial peptides (AMPs). In order to get an idea of the toxicity of our peptides we conducted several minimal inhibiting concentration (MIC) experiments with synthetic peptides ordered from DNA 2.0. These MIC measurements where done on E. coli, B. subtilis and S. delphini, with the first as representative of our Gram-negative expression host, the second for the Gram-positive targets and the last for our specific target.

The expected selectivity of the chosen peptides for Staphylococcus was confirmed by these experiments, as for all the peptides for which we could determine a MIC, that MIC was the lowest on S. delphini. For MIC by other peptides used in iGEM 2013 Team TU Delft, Click here. 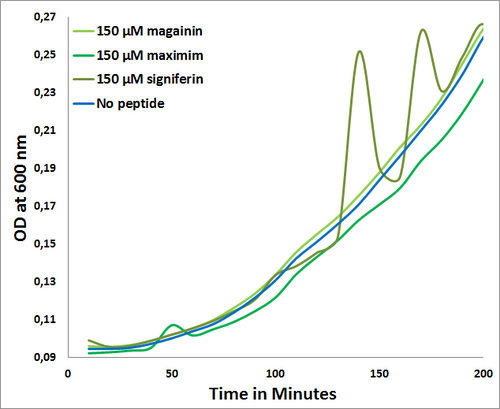 In order to determine the toxicity of the AMPs on mammalian cells we tested the most promising peptides on COS-1 cells[3]. As signiferin, staphycine and peptidor gave the best results in the experiments of MIC, they were chosen to be tested with concentrations up to 150µM on COS-1 cells. COS-1 cells were chosen as they, because of their simian nature, strongly resemble human cells with respect to membrane properties and crucial cell functions and mechanisms[4]. Normally healthy COS-1 cells attach to the bottom of the well, showing a clear fibroblastic morphology[5]. When they start to die they will swell and eventually detach from the bottom forming spherical cells which upon lysis leave behind cell debris.