Promoter activated by LuxR in concert with HSL

The lux cassette of V. fischeri contains a left and a right promoter. The right promoter gives weak constitutive expression of downstream genes.This expression is up-regulated by the action of the LuxR activator protein complexed with the autoinducer, 3-oxo-hexanoyl-HSL. Two molecules of LuxR protein form a complex with two molecules of the signalling compound homoserine lactone (HSL). This complex binds to a palindromic site on the promoter, increasing the rate of transcription.

This Plux promoter "pointing to the right" is the same sequence, but inverted, as part BBa_K199052.

Pretty good off in the absence of LuxR/HSL. [jb, 5/24/04]
The team from Davidson College and Missouri Western State University discovered that this part promotes "backwards transcription" when LuxR protein is present and AHL-3OC6 is absent. You can read the paper that documents this unexpected "backwards promoter activity" in their open access paper.

pLuxR is a commonly used inducible promoter. However, almost all of the teams characterized the pLuxR basing on AHL concentration. In our project this year, depending our in vitro system, we measured the promoter strength changes at different concentration of LuxR. We had expressed and harvested LuxR by BL21(DE), which we used in the measurement by diluting LuxR to different concentrations and added into the cell-free system. Through real-time detection by microplate reader, we achieved the result and confirmed the transition concentration range. 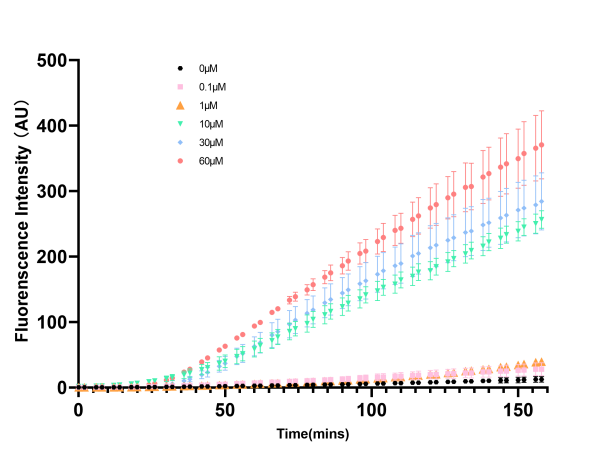 Figrure 1.The result of real-time detection while the eGFP expression was reduced by different concentration of LuxR. 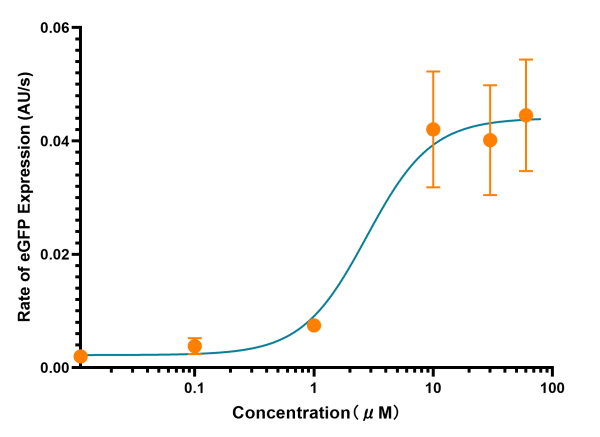 Figure 2. The trend of expression rate with the changes of LuxR concentration. 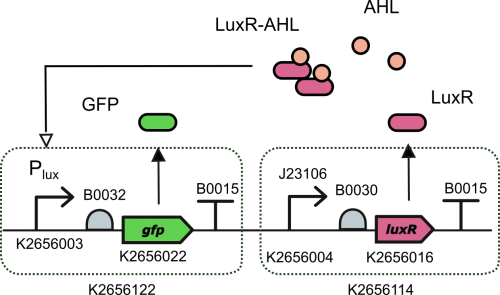 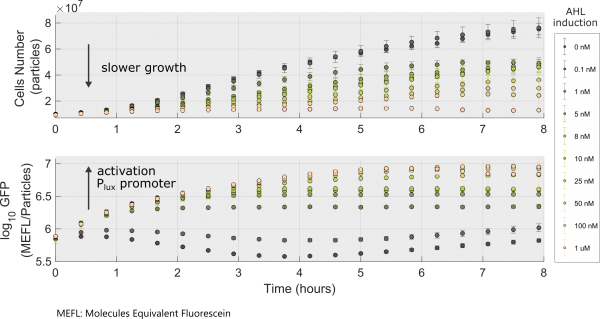 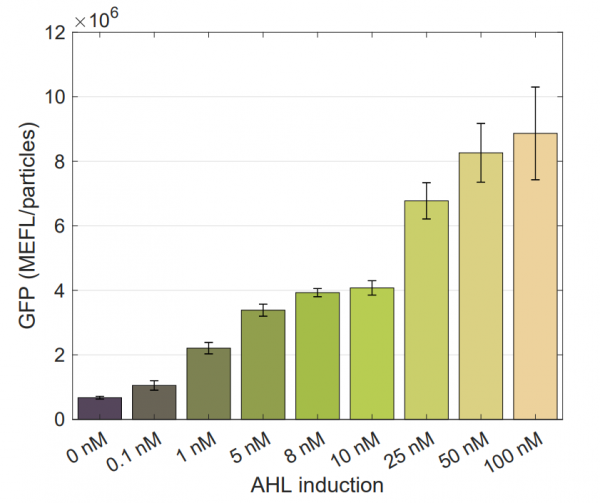 Using this optimized parameter we obtain the simulated hill function corresponding to the previous equation and compared it with the experimental data obtained (for steady-state, this is after reaching equilibrium). 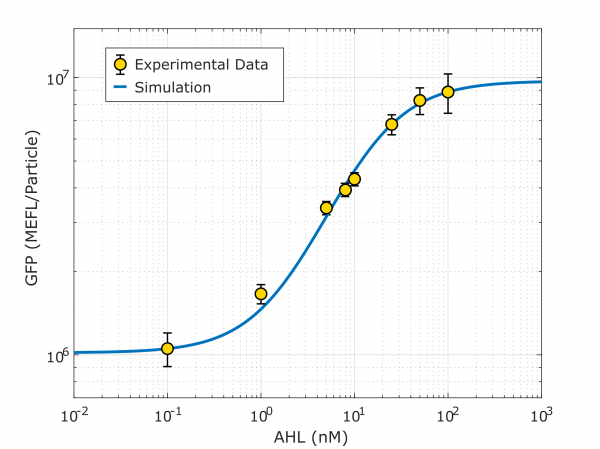 The crosstalk of Plux between 3 kinds of AHL molecules (3OC6HSL, 3OC12HSL and C4HSL) and 3 kinds of receptors (LuxR, LasR and RhlR) was characterized by ETH_Zurich 2014. However, they used AHL reagents to measure the dose-response of promoter activity, which may not be convenient in quorum sensing, because the concentration of AHL bacteria secrete may be out of the range they tested before. In other words, bacteria is unable to secrete so much AHL molecules to activate gene expression. Furthermore, the response time in the quorum sensing process is also important for designers to optimize their synthetic circuits with better precise and robustness. Therefore, we designed circuits to measure the crosstalk between receptors expressed in one kind of E.coli and AHL molecules secreted by another kind of E.coli and response time of these systems. Fig. 1: Results of our crosstalk experiment

3OC6HSL-LuxR is the wild-type pair of Plux. However, from this result, we can see that there are many other pairs can activate Plux. For example, 3OC6HSL-LasR, 3OC6HSL-RhlR, 3OC12HSL-LuxR, C4HSL-LuxR, C4HSL-LasR, C4HSL-Rhl can all activate it. What is more, the quorum sensing needs more than 30 hours to establish a steady state, which may be important for designing dynamic functions in bacteria with quorum sensing.

First, we cloned three AHL synthases: luxI (BBa_C0061), lasI (BBa_C0078) and rhlI (BBa_C0070), each ligated with promoter (BBa_J23100), RBS (BBa_B0034) and terminator (BBa_B0015) on a low copy backbone (pSB3K3). At the same time, we cloned three receptor-promoter combinations to pSB6A1. The three receptors are luxR (BBa_C0062), lasR (BBa_C0179) and rhlR (BBa_C0171) (with the same promoter, RBS and terminator as AHL synthases). Sensor promoter Plux (BBa_R0062) drives RFP (BBa_E1010) expression (with the same RBS and terminator as above) to detect the response of the promoters to AHL molecules via the receptors. Adding together, there are nine AHL-Receptor-Plux combinations. After that, we co-transformed the plasmids containing AHL synthases and plasmids containing receptor-Plux combinations. (Gene circuit of them is shown in Fig. 2)

Finally, we detect how RFP intensity per cell change with time, which can be used to indicate the intensity of the promoter response to AHL molecule via corresponding receptor. Detailed measurement methods are as follows:

1. Transform MG1655ΔsdiAΔlacI with 9 kinds of combinations of plasmids mentioned above.

2. Pick bacterial clones from the petri plate, then shake it overnight in the LB medium (3ml) with 50 microgram/ml Ampicillin and 30 microgram/ml Kanamycin at 37℃. For each combination, 2 clones are picked.

6. Take out 200μl cultures obtained from Procedure 5 and measure the fluorescent intensity and OD600 after some time. (The cultures will not be put back again.) The excitation wavelength is 584nm, emission wavelength is 607nm.

design of ultrasensitive responses basis of http://parts.igem.org/Part:BBa_R0062 use Point mutation With the hope to find an optimal promotor for our NEON system, we designed 9 mutations on sites -35, -36, -37 near the luxR binding site and tested another on -10 site that TUST 2017 reported to show decreased leakage. We conducted experiments to evaluate these lux pR mutants’ reaction to AHL stimulation and their leakage level. The test devices we designed include a constantly expressed luxR and a lux pR (or mutant) driven sfGFP (like BBa_K2558211 with original lux pR promotor, and BBa_K2558212 with lux pR-HS promotor).

We conducted the experiment first with 9 mutations on sites -35, -36, -37 near the luxR binding and another on -10 site that TUST 2017 reported to show decreased leakage. We transferred the plasmids with lux pR driven sfGFP into E. coli DH5α. In theory, AHL can induce gene expression by activating lux pR promotor. We measured the value of Fluorescence/OD without AHL stimulation by microplate reader to show the leakages of different lux pR mutants, as lux pR promotor is not supposed to be activated without AHL. Meanwhile, we also regard the value of Fluorescence/OD with 10^-10 M AHL stimulation to observe the sensitivity and expression intensity of different lux pR mutants. Experiment data is shown in the figures below. (Figure.1)

It is observed that high expression intensity is accompanied by high level of leakage in lux pR promotors. Wild type lux pR represented with black strand in the figures has the highest level of both leakage and intensity. The next three are Mutant 5 (G-36T), Mutant 6 (G-36C), Mutant 9 (T-35G). Mutant 5 has almost the same intensity as wild type, but the leakage is significantly smaller. Mutant 6 and Mutant 9 have a little bit less leakage and medium intensity. We also did the experiment with 10^-9 M and 10^-8 M AHL, all of the promotors show high expression levels and therefore unable to compare. (Data not shown)