The laccase Trametes versicolor TVEL5 BBa_K863030 was cloned via the AarI restriction site into the shuttle vector (BBa_K863204). This construct (BBa_K863207) was linearized and integrated into the yeast genome of P. pastoris GS115. Positive clones with single cross overs were identified by PCR on genomic DNA with the primer 5AOX-Phenotype-FW (GACTGGTTCCAATTGACAAGC) and TT-Phenotype-RV (GCAAATGGCATTCTGACATCC) as shown in Figure 1 and 2. Positive clones with single cross over resulted in a 2.2 kb DNA band, the aox1 gene, and a 1.9 kb DNA band, the TVEL5 laccase DNA band. As control the shuttle vector (BBa_K863204) itself was used. The expected DNA size is 437 bp. 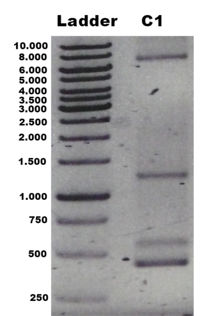 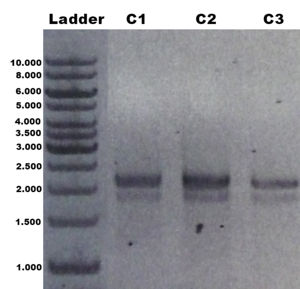 The clones were cultivated in minimal medium and induced with 1% (v/v) methanol twice a day for 2 days.

The supernatant of the culture was examined to active laccases by testing the enzyme activity. For this purpose the supernatant was re-buffered into H2O with HiTrap Desalting Columns and incubated with 0.4 mM CuCl2. After 2 hours of incubation time 140 µL of the re-buffered supernatant were applied for the activity assay with 40 µL Britton Robinson buffer (pH 5) and measured at 25 °C. These setting were chosen because of the experiences with the TVEL0 laccase. To detect activity of the TVEL5 laccase 9 mM ABTS were used. Figure 3 shows a distinct activity of each cultivation (C1, C2, C3) in comparison to the control, which was treated like the other samples. The control, which was also treated with CuCl2 also represented the negative control to determine the effect of CuCl2 oxidizing ABTS. In Figure 4 the same experimental setup was used in a total volume of 1 mL. The oxidation of ABTS by TVEL5 laccase is visible to the naked eye in C1, C2 and C3 in comparison to the control. C2 shows the highest potential in oxidizing ABTS in the activity measurements and also in the experiments with a higher volume. This may be due to a higher TVEL5 concentration in the supernatant of this cultivation.

Figure 3:Activity assay of TVEL5 using the re-buffered, CuCl2 incubated supernatant of C1, C2 and C3 with 140 µL each. 40 µL Britton Robinson buffer (pH 5) and 9 mM ABTS were added. Oxidized ABTS was detected by measuring the change in OD at 420 nm at 25 °C for 8 hours. 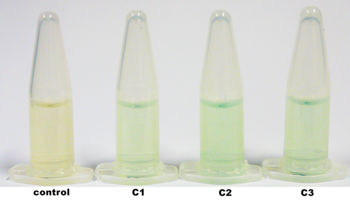 Figure 4:Activity test of cultivation (culture 1, 2, 3) supernatant of BBa_K863207. The control is the supernatant of P. pastoris GS115. The supernatants were re-buffered and CuCl2 incubated. Britton Robinson buffer and 9 mM ABTS were applied. Picture was taken after 8 hours incubation at 25 °C.
[edit]
Categories
Parameters