Polycistronic constitutive expression of BisdA and BisdB to degrade BPA with E. coli.

Expressing this BioBrick in E. coli enables the bacterium to degrade the endocrine disruptor bisphenol A (BPA). BPA is mainly hydroxylated into the products 1,2-Bis(4-hydroxyphenyl)-2-propanol and 2,2-Bis(4-hydroxyphenyl)-1-propanol. In Sphingomonas bisphenolicum AO1, a total of three genes are responsible for this BPA hydroxylation: a cytochrome P450 (CYP, bisdB), a ferredoxin (Fd, bisdA) and a ferredoxin-NAD+ oxidoreductase (FNR) Sasaki05a. The three gene products act together to reduce BPA while oxidizing NADH + H+. The cytochrome P450 (BisdB) reduces the BPA and is oxidized during this reaction. BisdB in its oxidized status is reduced by the ferredoxin (BisdA) so it can reduce BPA again. The oxidized BisdA is reduced by a ferredoxin-NAD+ oxidoreductase consuming NADH + H+ so the BPA degradation can continue Sasaki05a. This electron transport chain between the three enzymes involved in BPA degradation and the BioBricks needed to enable this reaction in vivo and in vitro are shown in the following figure (please have some patience, it's an animated .gif file):

The bisphenol A degradation with the BioBricks BBa_K123000 and BBa_K123001 works in E. coli KRX in general. Because Sasaki et al. (2008) reported problems with protein folding in E. coli which seem to avoid a complete BPA degradation, we did not cultivate at 37 °C and we did not use the strong T7 promoter as Sasaki et al. (2008) did for expressing these BioBricks but we cultivated at 30 °C and we used a medium strong constitutive promoter (BBa_J23110). 30 °C is in addition the cultivation temperature of S. bisphenolicum AO1. With this promoter upstream of a polycistronic bisdAB gene we were able to completely degrade 120 mg L-1 BPA in about 30 - 33 h. By fusing BBa_K123000 and BBa_K123001 together (using Freiburg BioBrick assembly standard) we could improve the BPA degradation of E. coli even further, so 120 mg L-1 BPA can be degraded in 21 - 24 h. This data is shown in the following figure:

We could also identify the BPA degradation products when working with E. coli TOP10 and MACH1 (data not shown) but because we want to fuse BisdA and BisdB to S-layer proteins which we express in E. coli KRX the characterizations of BBa_K123000 and BBa_K123001 were carried out in this strain. 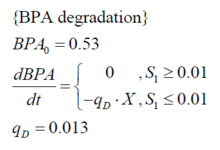 Fig. 4 shows a comparison between modelled and measured data for cultivations with BPA degrading E. coli. In Tab. 2 the parameters for the model are given, obtained by curve fitting the model to the data. 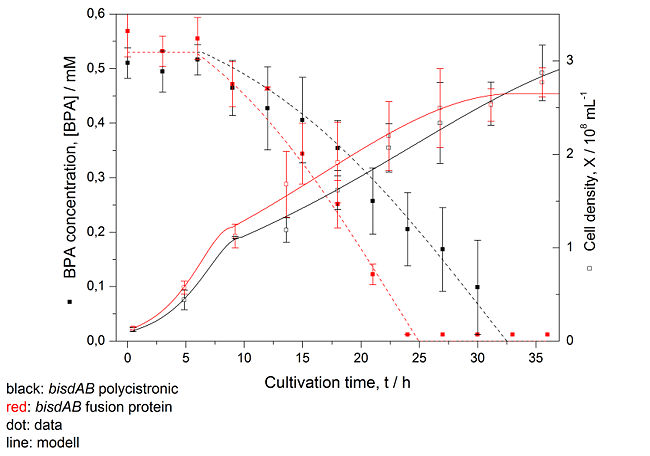 Interpretation of the results