This fluorescent S-layer fusion protein is used to characterize purification methods and the S-layer's ability to self-assemble on surfaces. It is also possible to use the characteristic of mCitrine as a pH indicator (Kainz et al., 2010).

The SgsE gene under the control of a T7 / lac promoter (BBa_K525303) was fused to mCitrine (BBa_J18931) using Freiburg BioBrick assembly for characterization experiments.

The SgsE|mCitrine fusion protein was overexpressed in E. coli KRX after induction of T7 polymerase by supplementation of 0.1 % L-rhamnose and 1 mM IPTG using the autoinduction protocol by Promega. 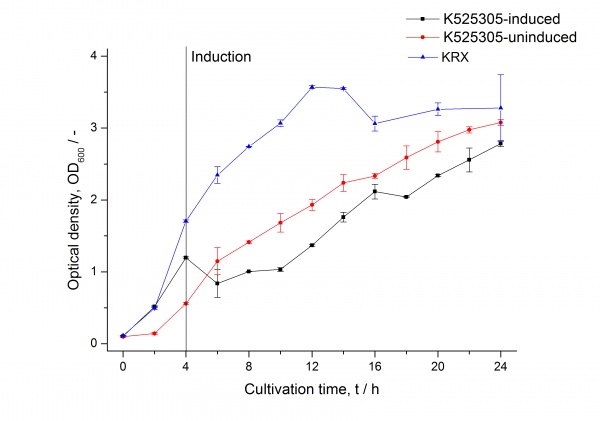 Figure 1: Growth curve of E. coli KRX expressing the fusion protein of SgsE and mCitrine with and without induction, cultivated at 37 °C in autoinduction medium with and without inductor, respectively. A curve depicting KRX wildtype is shown for comparison. After induction at approximately 4 h the OD600 of the induced BBa_K525305 clearly falls behind when compared to the uninduced culture. Both cultures grow significantly slower than KRX wildtype probably due to a leaky promoter and metabolic stress by the high copy plasmid. 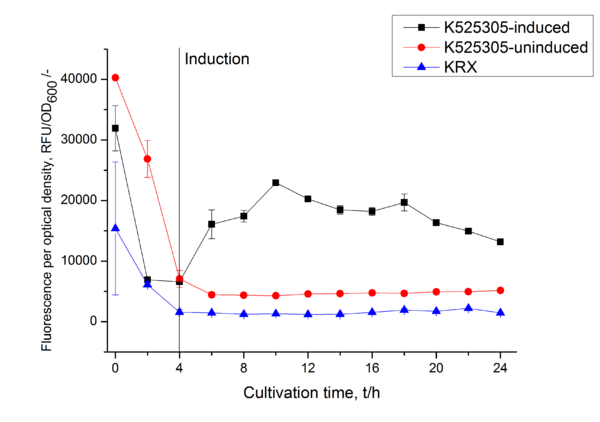 Scheme of purification strategy for SgsE (fusion) proteins without His-tag:

As observed in the analysis of the cultivations with expression of SgsE | mCitrine fusion proteins, these proteins form inclusion bodies in E. coli. Inclusion bodies have the advantage that they are relatively easy to clean-up and are resistant to proteases. The first purification step is to isolate and solubilize the inclusion bodies. This step is followed by two filtrations (300 kDa UF and 100 kDa DF/UF) to further concentrate and purify the S-layer proteins. After the filtrations, the remaining protein solution is dialyzed against ddH2O for 18 h at 4 °C in the dark. The dialysis leads to a precipitation of the water-insoluble proteins. After centrifugation of the dialysate, the water-soluble S-layer monomers remain in the supernatant and can be used for recrystallization experiments.

The fluorescence of the collected fractions of this purification strategy is shown in the following figure 3: 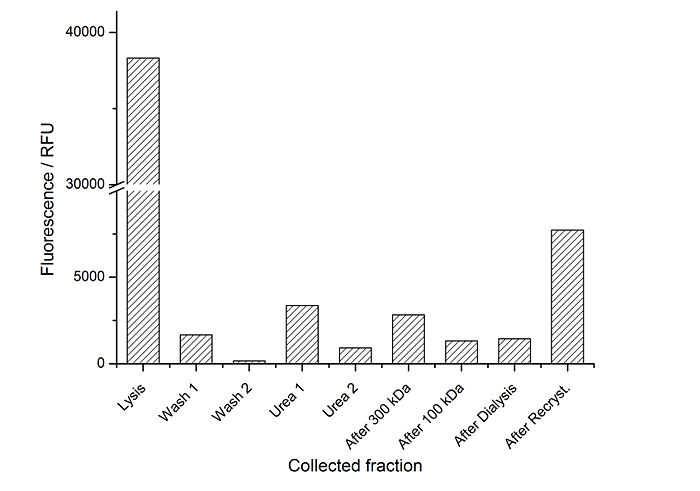 A huge amount of protein is lost during the purification, especially after the centrifugation steps. The fluorescence in the urea containing fractions is lowered due to denaturation of the fluorescent protein. Some fluorescence could be regenerated by the recrystallization in HBSS. This purification strategy is very simple and can be carried out by nearly everyone in any lab, being the first step to enable do it yourself nanobiotechnology.

Scheme of purification strategy for SgsE (fusion) proteins with His-tag:

By fusing the SgsE | mCitrine with a C-terminal His-6-tag the S-layer protein could be simply purified by using a denaturating His-tag affinity chromatography. This purification strategy has the advantage that no time-consuming and complex inclusion body purification and filtration is necessary to decrease the amount of native E. coli proteins. Additional to the simplification a higher purity of the S-layer protein could be reached.

This purification was performed using the SgsE fusion protein containing a N-terminal mCitrine,for identification and a C-terminal His-6-tag. The SDS-PAGE gel (Fig. 4) and the fluorescence (Fig. 5) in the collected fractions showed that the majority of fusion protein was eluated with a imidazole concentration of approx. 50 mM. There was also fluorescence measurable in the flowthrough and wash fractions. This indicates that the used 1 mL HisTrap FF crude (GE Healthcare) was overloaded or the protein was bound weakly at to the affinity matrix. The resulting purity in the elution fraction, the saving of time and the simplicity makes this procedure the prefered purification method. 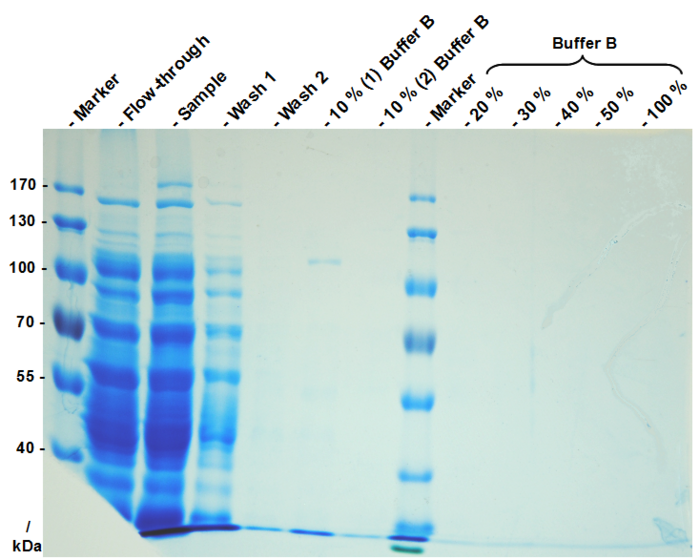 Fig. 4: SDS-PAGE gel of a denaturating immobilized metal affinity chromatography (IMAC) of a SgsE fusion protein containing a N terminal mCitrine and a C-terminal His-6-tag. A 1 mL HisTrap FF crude by GE Healthcare (Ni-NTA) was used for purification. The binding buffer contained 10 mM imidazole and the elution buffer (buffer B) 500 mM imidazole. The bound proteins were eluated by a stepwise rising imidazole gradient (10 % buffer B per step). The SgsE fusion protein (111,2 kDa) was eluated in the 10 % buffer B fraction in a high purity.

Fig. 5: Fluorescence in the fractions of a denaturating immobilized metal affinity chromatography (IMAC) of a SgsE fusion protein containing a N terminal mCitrine and a C-terminal His-6-tag. A 1 mL HisTrap FF crude by GE Healthcare (Ni-NTA) was used for purification. The binding buffer contained 10 mM imidazole and the elution buffer (buffer B) 500 mM imidazole. The bound proteins were eluated by a stepwise rising imidazole gradient (10 % buffer B per step). The SgsE fusion protein (111,2 kDa) was eluated in the 10 % buffer B fraction in a high purity.

After purification, solutions of monomeric SgsE S-layer proteins can be recrystallized and immobilized on silicon dioxide beads in HBSS (Hank's buffered saline solution). After the recrystallization procedure the beads are washed with and stored in ddH2O at 4 °C in the dark. The fluorescence of the collected fractions of a recrystallization experiment with BBa_K525305 are shown in Fig. 6. 100 mg beads were coated with 100 µg of protein. The figure shows, that not all of the protein is immobilized on the beads (supernatant fraction) but the immobilization is quite stable (very low fluorescence in the wash). After the immobilization, the beads display a high fluorescence indicating the binding of the SgsE | mCitrine fusion protein. 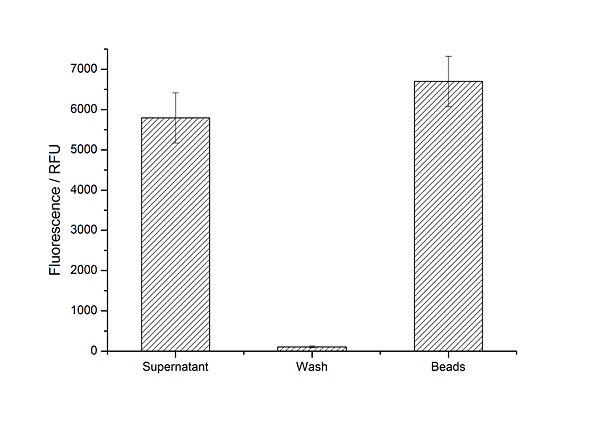 The data was collected in three independent experiments. The fluorescence of the samples was measured in the supernatant of the immobilization experiment after centrifugation of the silica beads. The fluorescence of the control was measured in a sample which was treated exactly like the others but no silica beads were added. 100 µg protein was used for one immobilization experiment. The data was fitted with a sigmoidal dose-response function of the form. 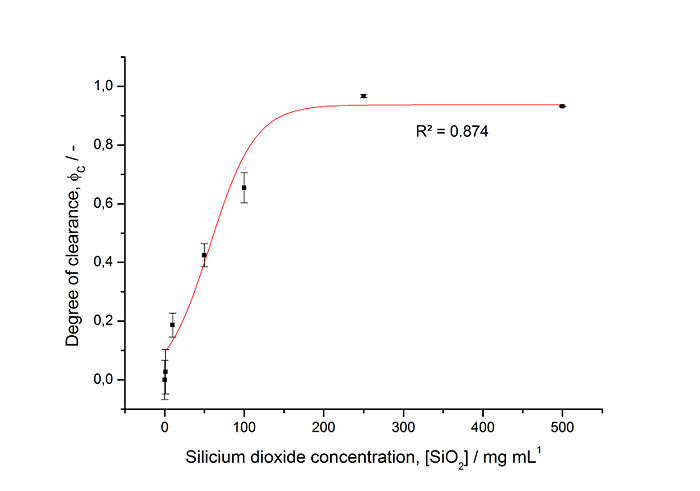 Fig. 7: Degree of clearance of the fluorescence in the supernatant plotted against the concentration of silicium dioxide beads used to immobilize BBa_K525305 (n = 3). Data is fitted with dose-reponse function (R² = 0.874).

Expression of S-layer genes in E. coli in shaking flasks

Purification for constructs with His-tag

Purification for constructs without His-tag