S-layer cspB from Corynebacterium glutamicum with TAT-Sequence and lipid anchor, PT7 and RBS

The S-layer of C. glutamicum is characterized by a hexagonal lattice symmetry. Attachment between S-layer and cell wall was found to be due to the hydrophobic carboxy-terminus of the PS2 protein (Hansmeier et al., 2004).

For characterization, the cspB gene was fused to a monomeric RFP (BBa_E1010) using Gibson assembly.

The CspB| mRFP fusion protein was overexpressed in E. coli KRX after induction of a T7 polymerase gene in the KRX's genome by supplementation of 0.1 % L-rhamnose using the autinduction protocol developed by Promega. 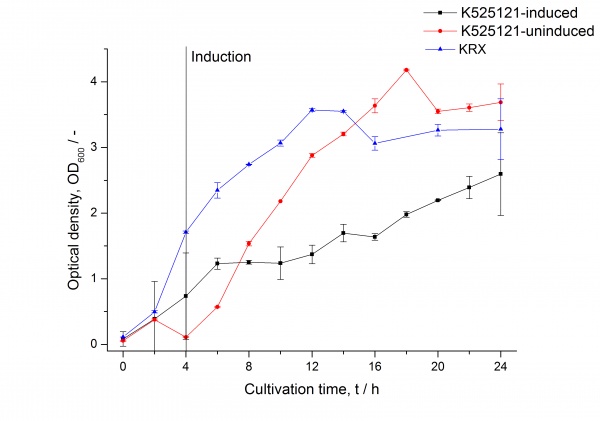 Figure 1: Growth curve of E. coli KRX expressing the fusion protein of CspB and mRFP with and without induction, cultivated at 37 °C in autoinduction medium with and without inductor, respectively. A curve depicting KRX wildtype is shown for comparison. After autoinduction at approximately 4 h, a slight decrease in the OD600 is observed approximately 4 hours later in the induced BBa_K525121 compared to the uninduced culture. Both cultures grow significantly slower than KRX wildtype. 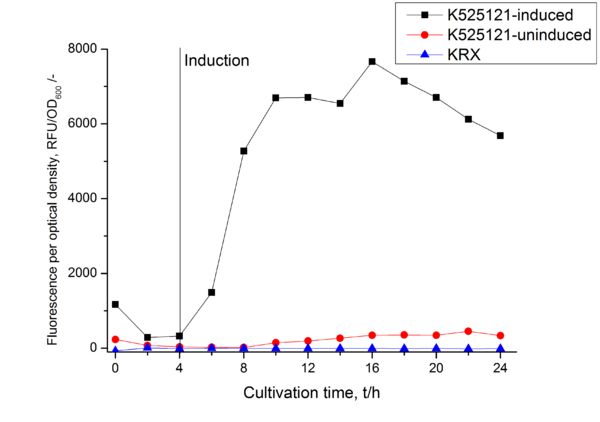 After a cultivation time of 18 h the mRFP|CspB the localization of the fusion protein in E. coli KRX was analyzed. Therefore a part of the produced biomass was mechanically disrupted and the resulting lysate was washed with ddH2O. The periplasm was detached from other parts of the cells by using a osmotic shock. The existance of fluorescene in the periplasm fraction, shown in Fig. 3, indicates that C. glutamicum TAT-signal sequence is at least in part functional in E. coli KRX.

The S-layer fusion protein could not be found in the lysate by SDS-PAGE and the cell debris were still red. This indicates that the fusion protein integrates into the cell membrane with it's lipid anchor. For testing this assumption the washed lysate was treated with ionic, nonionic and zwitterionic detergents to release the mRFP|CspB out of the membranes.

The existance of fluorescence in the detergent fractions and the proportionally low fluorescence in the wash fraction compared to the lysis fraction confirm the hypothesis of an insertion into the cell membrane (Fig. 3). An insertion of these S-layer proteins might stabilize the membrane structure and increase the stability of cells against mechanical and chemical treatment. A stabilization of E. coli expressing S-layer proteins was described by Lederer et al., (2010).

An other important fact is, that there is actually mRFP fluorescence measurable in such high concentrated detergent solutions. The S-layer seems to stabilize the biologically active conformation of mRFP. The MALDI-TOF analysis of the relevant size range in the polyacrylamid gel approved the existance of intact fusion protein in all detergent fractions (Fig. 3). 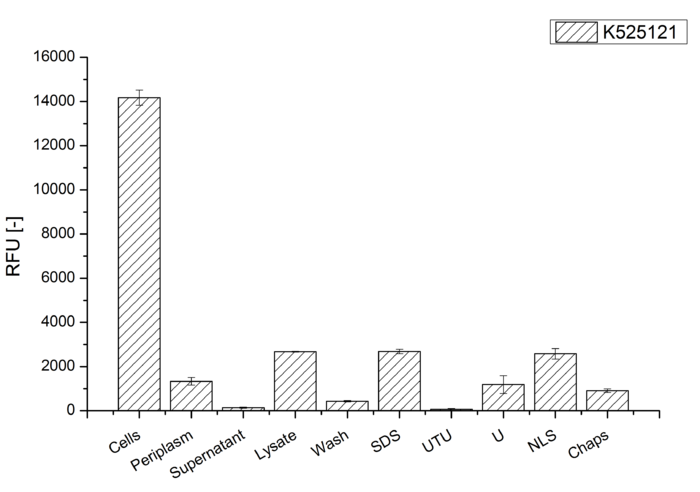 Figure 3: Fluorescence progression of the mRFP (BBa_E1010)/CspB fusion protein initiating with the cultivation fractions up to the detergent fractions of the seperate denaturations. Cultivations were carried out in autoinduction medium at 37 ˚C. The cells were mechanically disrupted and the resulting biomass was wahed with ddH2O and resuspendet in the respective detergent. The used detergent acronyms stand for: SDS = 10 % (v/v) sodium dodecyl sulfate; UTU = 7 M urea and 3 M thiourea; U = 10 M urea; NLS = 10 % (v/v) N-lauroyl sarcosine; CHAPS = 3-[(3-cholamidopropyl)dimethylammonio]-1-propanesulfonate.

MALDI-TOF analysis was first used to identify the location of the fusion protein in different fractions. Fractions of medium supernatant after cultivation, periplasmatic isolation, cell lysis, denaturation in 6 M urea and the following wash with 2 % (v/v) Triton X-100, 2 % SDS (w/v) were loaded onto a SDS-PAGE. The resulting gel was fragmented in slices containing proteins of similar size and analyzed with MALDI-TOF.

The following table shows the sequence coverage (in %) of our measurable gel samples with the amino acid sequence of fusion protein CspB|mRFP (BBa_E1010).

Fig. 5 shows these data. The gel samples were arranged after estimated molecular mass cut out from the gel. 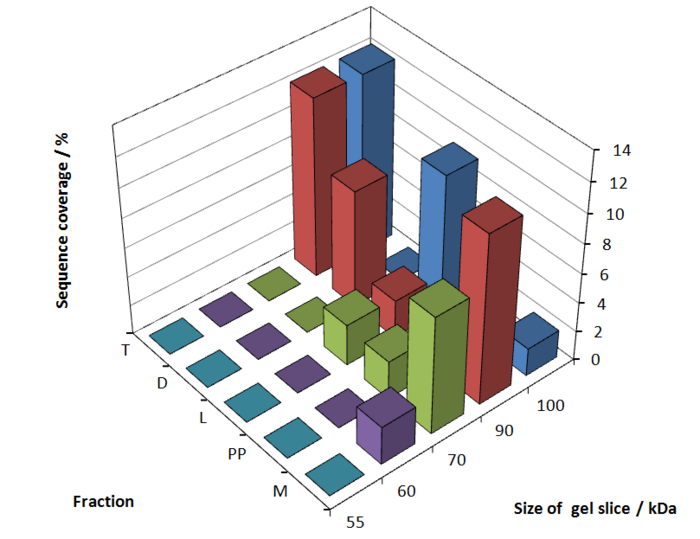 Figure 5: MALDI-TOF measurement of CspB/mRFP (BBa_E1010) fusion protein. Samples are arranged after estimated molecular mass of the gel slice. Measurement was performed with a ultrafleXtremeTM by Bruker Daltonics using the software FlexAnalysis, Biotools and SequenceEditor.

In Figure 5 sequence coverage data is visualized. The gel samples were arranged after estimated molecular mass cut out from the gel. As expected, only minor sequence coverage was found in the periplasmatic fraction, due to the lipid anchor located at the carboxy-terminus. This hydrophobic region inhibits the transport of the protein to the periplasm, mediated by the amino-terminal TAT-sequence. Little fluorescence was also found in the lysis fraction, verifying our assumtion, that the protein integrates or strongly binds to the cell membrane. Using urea to remove the S-layer fusion protein from the cell membrane resulted in a slightly higher sequence coverage. Washing the pellet with 2 % Triton X-100 (v/v), 2 % SDS (w/v), previously treated with urea, resulted in a higher sequence coverage and can therefore be expected as more applicable to desintegrate the S-layer fusion protein. The regarded sequence coverage in the supernatant of the cultivation medium may be caused by cell lysis during the late phase of cultivation.

To obtain more specific informations about the location of the S-layer fusion protein, after comparison with same treated fraction of E. coli KRX all gel bands in a defined size area were cut out of the gel and analysed with MALDI-TOF. Results are shown in Fig. 6.

Figure 6: MALDI-TOF measurement of CspB/mRFP (BBa_E1010) fusion protein in different fractions. Abbreviations are Ma: Marker (PageRuler TM Prestained Protein Ladder SM0671), M (medium), PP (periplasm), L (cell lysis with ribolyser), W (wash with ddH2O). In the left half of the gel fractions of E. coli KRX with induced production of fusion protein, the right half shows fractions of E. coli KRX without carrying the plasmid coding the fusion protein. Colours show the sequence coverage of the gel lane, cutted out of the gel.

The influence of other detergents to disintegrate the S-layer fusion protein was tested after disrupting the cells with a ribolyser. The cell pellet was incubated in 10 % (v/v) Sodium dodecyl sulfate (SDS), in 7 M urea and 3 M thiourea (UTU), in 10 M urea (U) in 10 % (v/v) N-lauroyl sarcosine (NLS) and in 2 % CHAPS (C). Samples of the incubations with these detergents were loaded onto a SDS-PAGE prior to measurement with MALDI-TOF.

The result of the MALDI-TOF measurement clearly demonstrates that all used detergents are applicable to disintegrate the S-layer fusion proteins from the bacterial cell membrane of E. coli. Fluorescence measurement of fractions, treated with the detergents, show significantly different values, indicating that some of the detergents (e.g. 3 M thiourea, 7 M urea) have a strong effect on protein folding.