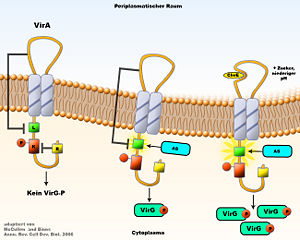 The VirA receptor of Agrobacterium tumefaciens

The VirA receptor is used by Agrobacterium tumefaciens to detect acetosyringone and other phenolic substances which are secreted by plants after injury. In presence of these substances VirA phosphorylates itself and afterwards VirG, a response regulator which activates vir promoters. These promoters control genes which are used for infecting the injured plant.

This virA gene was isolated from the TI-plasmid of A. tumefaciens C58. An illegal PstI restriction site was removed by site-directed mutagenesis.

You can find an already assembled VirA/G-receptor system here: BBa_K389017.

The functionality and specifity of this BioBrick were tested with the devices: BBa_K389015, BBa_K389016.

This receptor does not recognize