We replaced the nuclease domain of pyocin S2 with that of colicin E3 to produce a chimeric bacteriocin termed SE.

The receptor domain, translocase domain of pyocin S2 and the nuclease domain of colicin E3 are fused together to get a new chimeric bacteriocin termed SE. The antipseudomonal SE protein can target and inhibit P. aeruginosa, even including those harbouring a S2 immunity protein IMMS2.

The chimeric bacteriocin SE (BBa_K3740042) was constructed with an inducible expression vector to form the SE-PET28A expression vector, and transferred into E. coli BL21 to verify its function.

Method: IPTG was added to a final concentration of 0.1 mmol/mL to induce SE protein expression in E. coli BL21 and subsequently incubated at 25℃ for 12 hours. Supernatant containing SE or S2 proteins was obtained by sonication and centrifugation respectively. The crude protein extract was loaded into SDS-PAGE gel and stained by Coomassie Blue to verify the presence of target proteins. 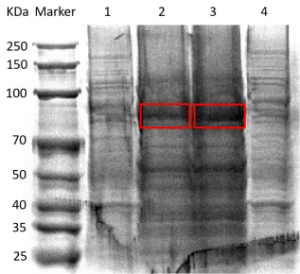 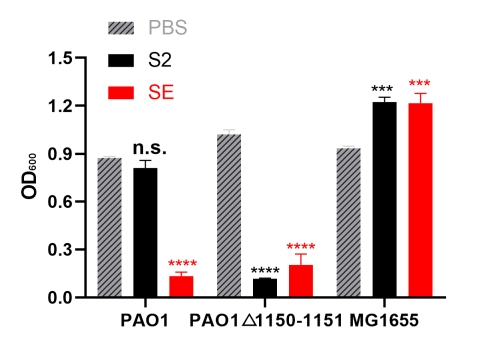