This part contains an arabinose operon, which constitutes the arabinose sensing system. By connecting the sfGFP gene downstream, we were able to verify the expression intensity of this arabinose operon.

Arabinose operon is composed of AraC protein, PBAD and PC. AraB, araA and araD are three genes required for arabinose degradation in E. coli. They form a gene cluster, abbreviated as araBAD, which encodes three enzymes required for arabinose metabolism: Ribulose kinase, Arabinose isomerase and ribulos-5-phosphate eimerase.
The expression of araBAD gene is regulated by araC transcription factor, the fourth gene in the Ara operon. AraBAD and araC genes are transcribed in opposite directions on the two strands. AraBAD is translated from PBAD to the right and araC from PC to the left.
As shown in Figure 1, when arabinose is present in cells, araC, the product encoded by gene araC, binds to arabinose and binds to the upstream promoter region of PBAD to activate RNA polymerase and activate the gene after PBAD. On the contrary, when arabinose is not present, the product araC will cause DNA curling to inhibit the binding of RNA polymerase, and inhibit the expression of gene downstream of PBAD. 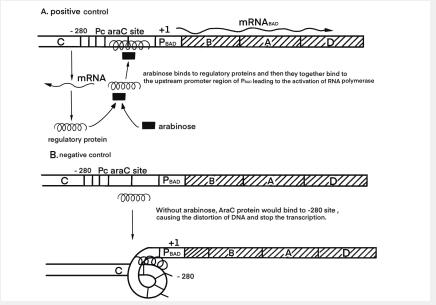 To prove the arabinose sensing system can work successfully, a sfGFP was inserted after PBAD under the induction of arabinose at a series of concentrations. As shown in Fig. 2B, the expression efficiency was highest when induced with 0.2 g/mL arabinose. 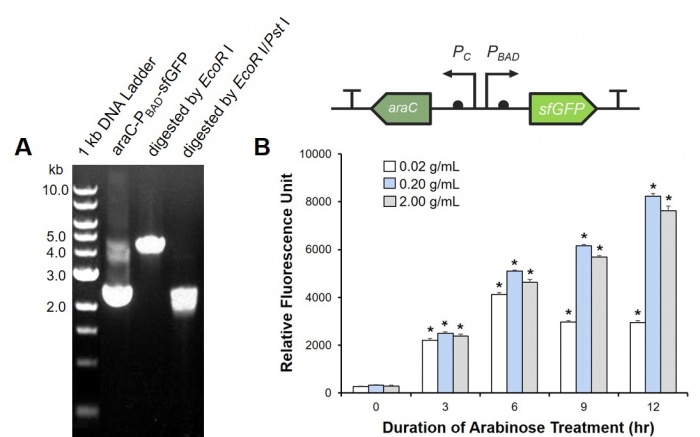 Fig. 2 Arabinose can induce the downstream expression. (A) Digestion and electrophoresis of araC-PBAD-sfGFP. (B) AraC-PBAD induction at different concentrations of arabinose. E. coli DH5α was transformed with the designed plasmid, cultured for 8 hrs, and diluted OD600 to 0.04. 0.02, 0.2 or 2 g/mL arabinose was added respectively. The fluorescence intensity of sfGFP was detected at the indicated time. The experiment was performed three times in triplicate. *, P < 0.05 from respective control using Student’s t test.

We added some synonymous mutations to avoid part rules.

We found this sequence data in the previous iGEM teams (Glasgow 2017) and in GenBank.