Description
This part generates a red-mutant of the luciferase from the Japanese firefly (L.cruciata) as well as the luciferin regenerating enzyme (LRE). It is under the control of an Arabinose induced promoter. D-Luciferin has to be added to obtain light output.

The light-emitting reaction involves the conversion of D-Luciferin into oxyluciferin. This compound competes with D-Luciferin for the lucifearase's binding site, causing strong inhibition of enzyme activity. LRE removes oxyluciferin from the system by converting it into 2-cyano- 6-hydroxybenzothiazole (CHBT). This compound is non-enzymatically converted into D-Luciferin in the presence of D-cysteine. It has been proposed that in the natural system, L-cysteine is used to produce L-Luciferin, which then isomerises into D-Luciferin, but this could not be reproduced by the 2010 Cambridge iGEM team.

Light output can also be achieved by addition of CHBT and D-cysteine instead of D-Luciferin, but D-cysteine might have detrimental effects on cell growth and physiology. 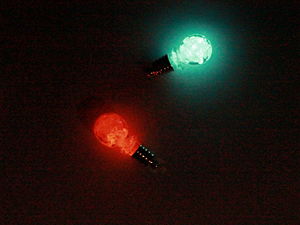 1Measured by the Cambridge iGEM team 2010 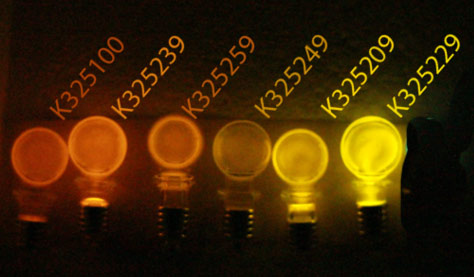 The E.glowli team used site-directed mutagenesis to create a series of colour mutants from this BioBrick