TmEncapsulin is a protein found from Thermotoga maritima. A paper says that it consists of 60 monomers and forms capsule, Virus-like particle(VLP) [1]. iGEM also treats it as a useful part (BBa_K192000).

We used TmEncapsulin as a biological polymer. We inserted SpyTag in TmEncapsulin. This enables TmEncapsulin to display different types of proteins on the surface of the protein capsule (See Fig.2) (SpyCatcher:BBa_K1159200, SpyTag:BBa_K1159201) [2]. SpyTag forms an isopeptide bond with SpyCatcher when they are mixed [3]. In previous research about TmEncap, it is showed peptides inserted after 138th amino acid in TmEncap can be exposed on the protein capsule as a loop [4]. Furthermore, “Bae et.al” showed when SpyTag is inserted at the same position, SpyCatcher/SpyTag also forms a bond between SpyCatcher and SpyTag inserted TmEncap (SpyTmEnc) [5]. 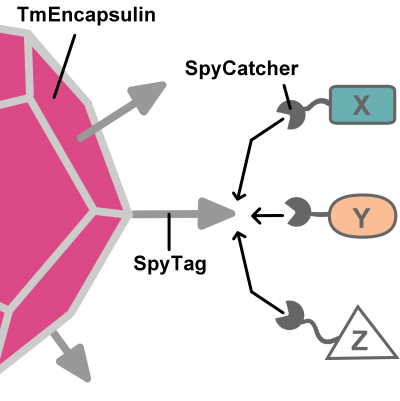 Also, this has three tag and cleavage sites. First is 6x-His tag placed in the C-terminus of TmEncapsulin for protein purification by using Ni-NTA beads. However, in a paper, Ni-NTA beads cannot bind to 6x-His tag added in C-terminus because it doesn’t display enough to the surface of the protein capsule [4]. To solve this problem, we inserted second tag. Second is HAtag inserted between TmEncapsulin and 6x-His tag in expectation of C-terminus to display on the surface of the capsule. Third is 6x-His-tag and linker inserted between #43 and #44 amino acids of native encapsulin for improving heat-resistance of TmEncapsulin. To design third one, we refered BBa_K2686002 of iGEM EPFL 2018 and the same paper (BBa_K2686002).

We put it between the BamHI site and the Ndel site on pET11-a. We used BL21 (DE3) for gene expression. We used the Ni-NTA Agarose for purification. After that, we confirmed the molecular weight of SpyCatcher inserted TmEncapusulin by using SDS-PAGE. 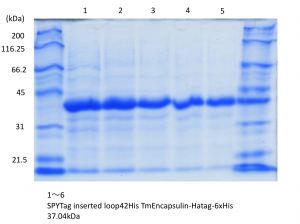 1. E. coli which expressed this part were lysed with sonification.
2. Proteins are purified from lysate with Ni-NTA agarose(QIAGEN).
3. Imidazole eluates were visualized and confirmed by SDS-PAGE followed by CBB staining.

This purification method works. As shown in Fig.1, the protein successfully purified. 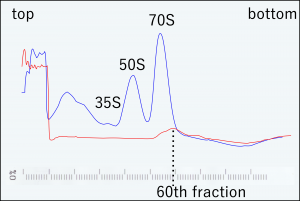 Fig. 2 TmEncapsulin polymer appears as the peak.
TmEncapsulin expressed E. coli lysate and purified protein solution was loaded on 10%-60% sucrose linear gradient / 20 mM Tris 7.5, 50 mM NaCl, then centrifuged in 100,000g for 18 hours at 4℃ with SW41(Beckman). The solution was fractionated on a 96-well plate with BioComp. At the same time, 260nm absorption was measured. 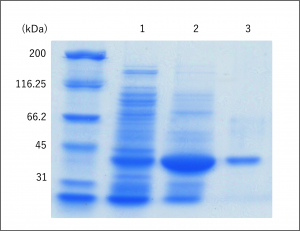 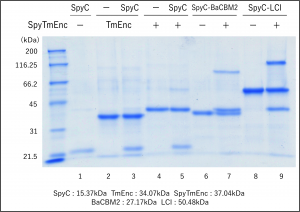 Fig. 4 Isopeptide bond formation between Plastic binding proteins and Encapsulin.
3µL of SpyCatcher-Plastic-binding protein (SpyC-PBP) solution and 3µL of SpyTag inserted TmEncapsulin (SpyTmEnc) solution was mixed, then placed for 16h at room temperature. Then 6µL of 2x SDS sample buffer was added. 10µL of each sample was loaded. SDS-PAGE for 30min in 200V. The gel was CBB stained. 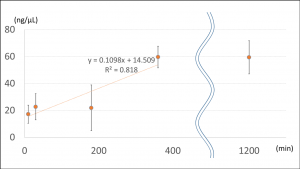 We assessed the size of the protein polymer.
The TmEncapsulin purified and eluted from Ni-NTA was loaded on the top of 10%-60% linear sucrose gradient. The samples were ultracentrifuged in 100,000g for 18 hours at 4℃ with SW41(Beckman) and fractionated on a 96-well plate with BioComp. Absorbance 260 nm was monitored.

In Fig. 2, the blue line shows A260 of E. coli lysate (control). As shown in the figure, bacterial ribosomes are observed as peaks in the indicated position. The red line shows the A260 profile of eluted TmEncapsulin. Around the 60th fraction, a peak was clearly observed. As TmEncapsulin polymer’s size is 20 nm and the 70S bacterial ribosome’s size is also about 20 nm, this peak around 60th fraction looks exactly the TmEncapsulin spherical polymer. Interestingly, the first drop of the fractionation (the top of the fraction) was around 10 (signals between 1-9 can be attributed to air bubbles), showing that most of the A260 signal in the purified TmEncapsulin were collected in 70S-80S area, with almost no accumulation of monomer form.

The equal amount of SpyCatcher-Plastic-binding protein (SpyC-PBP) solution and SpyTag inserted TmEncapsulin (SpyTmEnc) solution were mixed and incubated for 16h at room temperature. Samples were taken and assessed with SDS-PAGE.

These results show we successfully conjugated several proteins to Encapsulin by SpyTag-SpyCatcher system in vitro. This means that any protein with SpyCatcher can be efficiently and easily displayed on the surface of the protein capsule.

Next, we measured the time development of SpyCatcher-SpyTag bond formation. An equal amount of SpyCatcher protein (SpyC) and SpyTag inserted TmEncapsulin (SpyTmEnc) were mixed and incubated at room temperature. At different time points, 10 min, 30 min, 60 min, 180 min, 360 min, 1200 min, the reaction was stopped by adding 2x SDS sample buffer. Mixed samples were assessed with SDS-PAGE. The intensities of the conjugated bands were quantified.

As shown in Fig. 5, conjugated bands become evident gradually (labeled with arrow). Signals were quantified and summarized in Fig. 6. The reaction looks saturated after 360 minutes, even though substrates still remain a lot. This might be explained by water evaporation while incubation. Otherwise, it is possible that a bound protein prevents another protein from binding to near sites on a capsule cage. If it is the case, it might limit the number of binding proteins on a capsule. 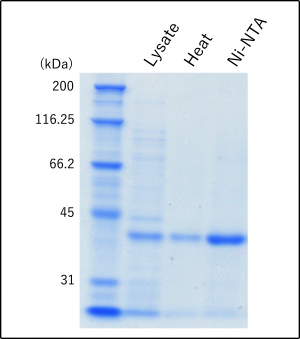 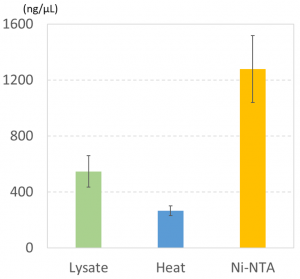 Fig.8 Ni-NTA beads purification got about 5 times concentrated TmEncapsulin SDS-PAGE that showed in Fig.7 was triplicated, then band intensities were quantified with ImageJ. Then each protein concentration of the solution was calculated.

This part is our improved part. We improved “Encapsulin protein with HexaHistidine insert” (BBa_K2686002) to “SPYtag inserted Tm Encapsulin” (BBa_K3185000). We introduced two modifications to the existing part. First, we improved purification efficiency by adding 6x-His tag to C-terminus. Second, we enabled displaying different types of proteins on the surface of protein capsule by inserting SpyTag.

TmEncapsulin is a protein found from Thermotoga maritima. TmEncapsulin assembles sphere-like protein capsule as 60mer. This protein capsule could be applied to different situations, and ways to overexpress with E-coli and purify have been researched for a long time.

Encapsulin on existing basic parts page promoted thermotolerance of native TmEncapsulin by introducing 6x-His tag between 43rd and 44th amino acid. After Expressing this by E.coli cell-free system, we can purify encapsulin by collecting supernatant after heat treatment and centrifugation.

We added 6x-His tag to the C-terminus of an existing part. This is due to make them available to protein purify by using Ni-NTA beads. However, in a paper suggested, Ni-NTA beads cannot bind to 6x-His tag added in C-terminus because it doesn’t display enough to the surface of the protein capsule [4]. Here, we placed HAtag between TmEncapsulin and 6x-His tag in expectation of C-terminus to display enough on the surface of the capsule. We compared E.coli lysate before purification with a heat-treated product and Ni-NTA purified product with SDS-PAGE.

Shown in the Fig.7 below, we succeeded in purifying Enacapuslin by using Ni-NTA beads. You can see that the product purified by Ni-NTA has a darker band. Also, we quantified band intensity, then calculated purified protein concentration. As shown in Fig.8, we were able to purify with five times as much concentration than the existing part by using Ni-NTA. This improvement means we can purify encapsulin more easily with high concentration.

There are many possible usages of Encapsulin. One is protein displaying on the surface of the capsule. For example, iGEM EPFL 2018 which created the existing part also created Encapsulin with HexaHistidine insert and C-terminal OT1 (BBa_K2686000) which are antigens of “OT1”. This modification aims to display antigen to immune cells effectively.

In order to make protein displaying easier, we inserted SpyTag in TmEncapsulin. SpyTag forms an isopeptide bond with SpyCatcher when they are mixed [3]. In previous research about TmEncap, it is showed peptides inserted after 138th amino acid in TmEncap can be exposed on the protein capsule as a loop [4]. Furthermore, Bae et al. showed when SpyTag is inserted at the same position, SpyCatcher/SpyTag also forms a bond between SpyCatcher and SpyTag inserted TmEncap (SpyTmEnc) [5]. This modification enables us to display different types of protein on SpyTmEnc through SpyCatcher. (See the Visual description of protein displaying)

To demonstrate our SpyTmEnc can conjugate with SpyCatcher fused protein, we mixed SpyTmEncap with several kinds of protein. In lane 4 and 5, SpyTmEnc is loaded with or without SpyC. Only in lane 5, which is mixed with SpyC, the bigger band appeared. The molecular weight of each protein is SpyC: 15.37k, SpyTmEnc: 37.04k, so the conjugated band should be 52.41k. Therefore the bigger band looks objective conjugated protein. As a negative control, we also tested with an existing part: TmEncapsulin without SpyTag. Properly, TmEnc and SpyC did not show conjugated band as shown in lane 3. Also, as shown in lane 7 and 9, proteins fused with SpyCatcher are also conjugated to SpyTmEnc.

This result shows we succeed in conjugating several kinds of proteins to Encapsulin. This means that the arbitrary type of protein which fused with SpyCatcher can be displayed on the protein capsule.