The part was built after the CD27L endolysin has been expressed in E. coli and assayed against B. subtilis1, a susceptible species (see BBa_K3183200). The experiments have compared several CD27L variants (BBa_K3183200, BBa_K3183201, BBa_K895005) and determined that the full length CD27L shows maximal activity against the targeted species. At the same time, the properties of the erm promoter have been assayed in L. reuteri with the aid of a fluorescent reporter protein (see BBa_K3183100). As such, given that the most relevant simple parts have shown to work as expected, the current construct has been designed, codon optimised and synthesized by IDT. Finally, the composite part has been assembled by Gibson assembly into the pTRKH3 vector (BBa_K3183050) and transformed into L. reuteri by electroporation. Individual colonies were grown in MRS broth supplemented with 5 ug/ml erythromycin. Expression was assayed through SpyCatcher band-shift assays and through the use of a linked fluorescent reporter and fluorescence microscopy (see BBa_K3183100). The secretion efficiency assay involved harvesting transformants grown overnight by centrifugation at 12000g for 5 minutes. The supernatant was kept and labelled as “the extracellular fraction”. The pellet was resuspended in 1/10 original volume PBS buffered at pH 7.4 and supplemented with PI, 1mM PMSF protease inhibitors and 1% Triton X-100. The suspension was then sonicated using a Sonics VCX Ultrasonic Processor for Small Volume Applications twice, each for a total of 5 minute sonication time distributed in 20 second pulses at 75% amplitude followed by 20 sec rest periods. Next, the sample was centrifuged at 12000g for 10 min; the supernatant was labelled as “the cytoplasmic fraction”, while the pellet was resuspended in the same buffer and labelled as “the membrane fraction”. Each fraction was then incubated with SpyCatcher for 1 hour and run on an SDS-PAGE gel followed by imaging using a 700 nm filter.

Unfortunately, none of our assays were able to detect any protein of interest in any of the fractions (Fig. 1). Indeed, fluorescence microscopy confirmed that very little exogenous protein expression had occured in the strain (Fig. 2) 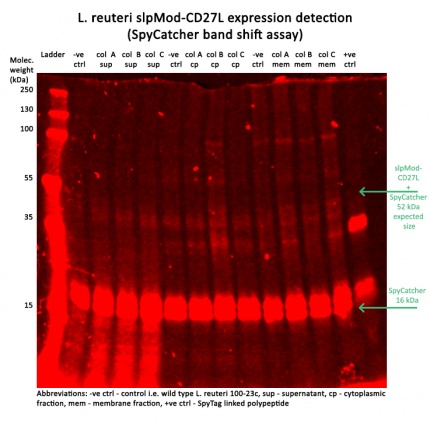 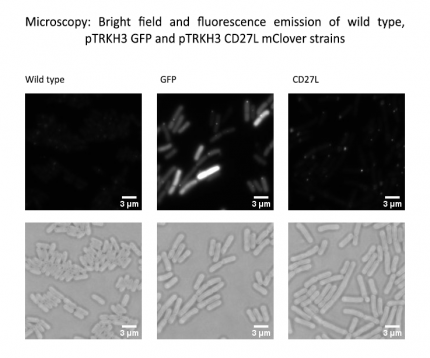 The fluorescence microscopy images indicate the presence of inclusion body-like structures inside the cells transformed with this composite part. This may imply that the protein does not fold properly in the strain we used and that decreasing the strength of the promoter or choosing a strain with a more apt heat shock response may improve expression efficiency