This composite part comprises the the two cellular factors necessary for quorum sensing and the subsequent transcriptional regulation. The AgrC gene encodes a membrane bound receptor with histidine kinase activity induced by the binding of the C. difficile autoinducer peptide (AIP). During activation, the receptor autophosphorylates one of its histidine residues and then transfers to moiety to an aspartate residue of AgrA. This induces AgrA’s dimerization and activation, such that the dimer can bind its cognate promoter and initiate transcription1. The purpose of this part was mainly to confirm that the expression of functional factors is possible in L. reuteri and to further optimize expression parameters to limit cellular stress as much as possible while retaining signalling capabilities.

Methods:
The current construct consists of the AgrC and AgrA genes, as found in the C. difficile genome, but codon optimised for L. reuteri and tagged with an HA tag and SpyTag, respectively. The construct was synthesized by IDT. The composite part has been assembled by Gibson assembly into the pTRKH3 vector (BBa_K3183050) and transformed into L. reuteri by electroporation. Individual colonies were grown in MRS broth supplemented with 5 ug/ml erythromycin at 37 and 28 degrees. Expression was assayed through SpyCatcher band-shift assays (for AgrA) and western blotting with anti-HA antibodies (for AgrC). The assays involved harvesting transformants grown overnight by centrifugation at 12000g for 5 minutes. The supernatant was discarded, while the pellet was resuspended in 1/10 original volume PBS buffered at pH 7.4 and supplemented with PI, 1mM PMSF protease inhibitors and 1% Triton X-100. The suspension was then sonicated using a Sonics VCX Ultrasonic Processor for Small Volume Applications twice, each for a total of 5 minute sonication time distributed in 20 second pulses at 75% amplitude followed by 20 sec rest periods. Next, the sample was centrifuged at 12000g for 10 min; the supernatant was labelled as “the cytoplasmic fraction”, while the pellet was resuspended in the same buffer and labelled as “the membrane fraction”. For AgrA, each fraction was then incubated with SpyCatcher for 1 hour and run on an SDS-PAGE gel followed by imaging using a 700 nm filter. For AgrC, western blots were performed with HA Tag Monoclonal Antibody conjugated to DyLight 680 from ThermoFisher Scientific and imaged using a 700 nm filter.

Results:
Unfortunately, none of our assays were able to detect AgrA in any of the fractions: 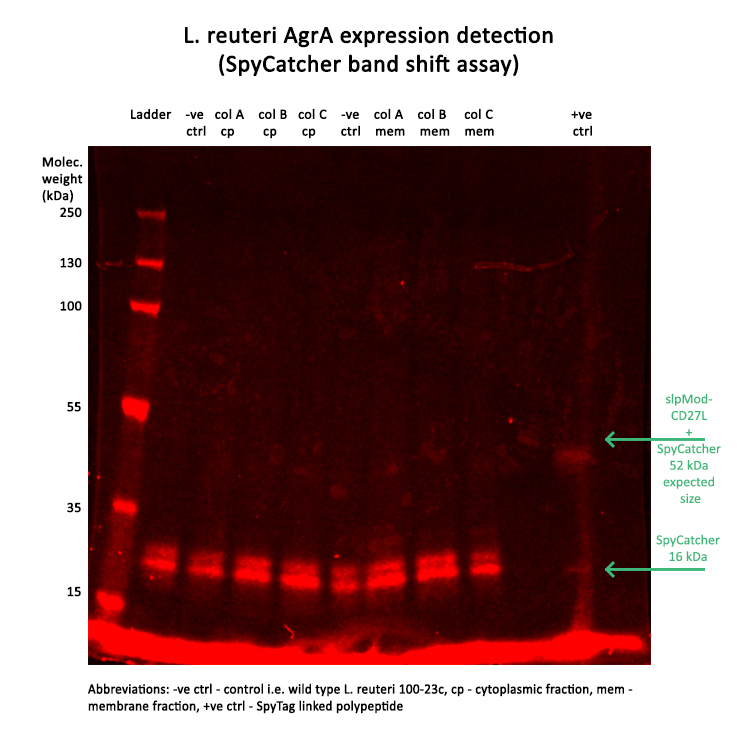 Identical results were obtained for the cells incubated 37 and 28 degrees.
AgrC has not been detected in Western blots, however, neither was the positive control we used, so no conclusions can be drawn with regard to its expression. However, given that AgrA and AgrC were encoded on the same cistron, it is likely that AgrC was not expressed.