The iGEM Team Uppsala 2019 added the ribosome standby site upstream of the RBS in Part: BBa_K1033926 by inverse PCR mutagenesis. The here displayed part has higher expression of the chromoprotein AsPink than the original part BBa_K1033926

in Escherichia coli when expressed in a medium-copy-number plasmid (pSB3K3), as shown in Figure 3 & 4.

The improved part increased expression because there is an addition of a ribosome standby site (RSS). This RSS is situated between the promoter and ribosome binding site and works as an unstructured flanking region before the RBS in mRNA. When the RBS is inaccessible because it lies in a stem-loop structure, this flanking region can serve as a site on which an initiation complex of the ribosome can assemble.

The AsPink plasmid pSB1C3_BBa_K1033926 (from the distribution kit) was cut with EcoRI & PstI and then ligated into pSB3K3 vector, which is a medium-copy-number plasmid. A medium-copy-number plasmid was chosen rather than a high-copy one because it allows for potential increases in protein expression. Ligation and transformation yielded construct pSB3K3_K1033926 (pSB3K3_asPink). Inverse PCR mutagenesis was then used on this construct to insert 9 CA repeats as a RSS with primers shown in Figure 1 .

Figure 1: Primer design for inverse PCR mutagenesis. Primers for the 9 CA repeats insertion before the RBS. The red characters are the overhangs of each primer that become the inserted nucleotides


By inserting the RSS, the RBS is predicted to be released from a stem-loop secondary structure, as illustrated in Figure 2.

A difference in color intensity between the E. coli colonies transformed with pSB3K3_asPink and pSB3K3_RSS_asPink can be readily identified by the naked eye and camera, as shown in Figure 3. 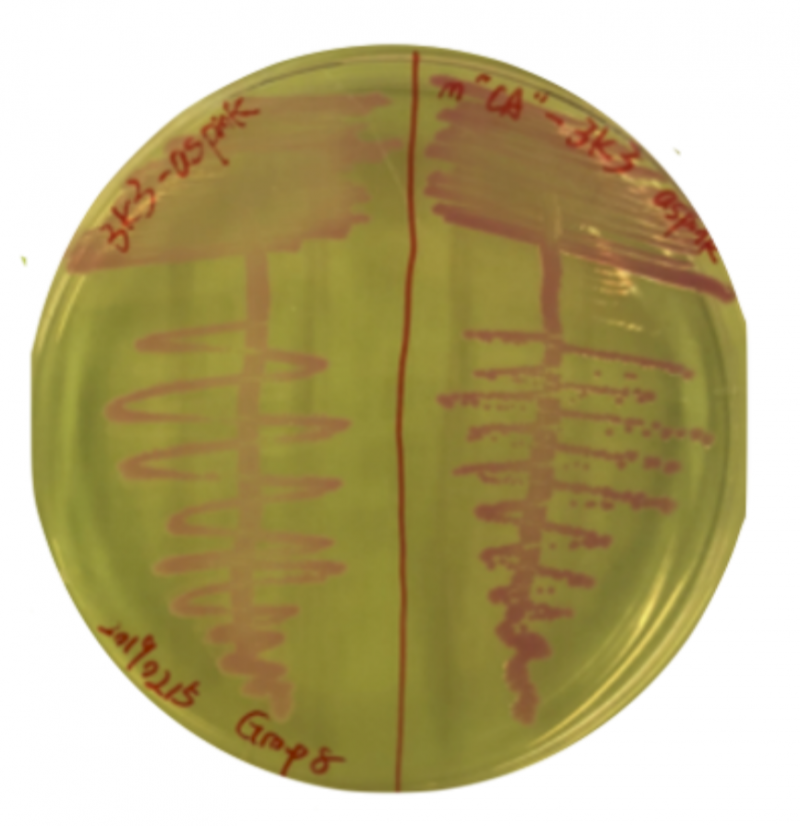 
A colorimetric assay was performed to measure the color intensity: E. coli colonies, picked from the plate shown in Figure 2 were cultured in liquid LB medium overnight. Then cells were lysed with lysozyme and Triton®X-100. After centrifugation, the supernatant was taken for measurement in the spectrophotometer at a wavelength of 572 nm. The result (Figure 4) indicated that there is a higher expression of AsPink in colonies transformed with the improved part (pSB3K3_RSS_asPink) compared to the control (pSB3K3_asPink). 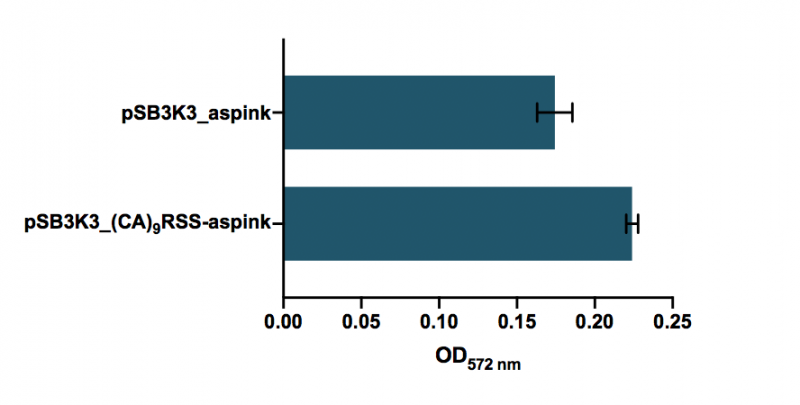 In conclusion, 9 CA repeats inserted in the RBS standby site of the part K1033926 caused a 22% upregulation of expression of AsPink in the medium-copy plasmid pSB3K3.