Adapted from the system for subtilin-regulated gene expression (SURE) in Bacillus subtilis Bongers, this plasmid was constructed to express proteins present in RCF 10 BioBricks, composed of an RBS followed by a coding sequence, upon subtilin induction.

The SURE system is a stringently controlled expression system that displays both high levels of expression and very little promoter 'leakage'. This makes it ideal for the optimization of heterologous protein expression. The subtilin producing 'B. subtilis' ATCC 6633 strain senses the presense of the lantibiotic subtilin through the sensor histidine kinase SpaK, which phosphorylates its response regulator SpaR. SpaR can then bind to so-called spa boxes in the promoter regions of genes involved in subtilin biosynthesis, resulting in autoinduction of this system Kleerebezem. In the SURE system, a B. subtilis strain naturally lacking the subtilin biosynthesis and regulation genes has the spaRK genes introduced into its genome. A plasmid carrying a spa box promoter that is transformed to this strain can then drive the expression of proteins upon subtilin induction of SpaRK signalling.

This backbone has issues when used in certain E. coli strains.

Induction of the expression backbone with different concentrations of subtilin using GFP as a reporter (part BBa_E0240) in liquid medium. These results demonstrate that addition of 0.5 to 1%(vol/vol) of culture supernatant of a subtilin producing B. subtilis strain (containing subtilin) to the culture is sufficient to reach optimal induction. 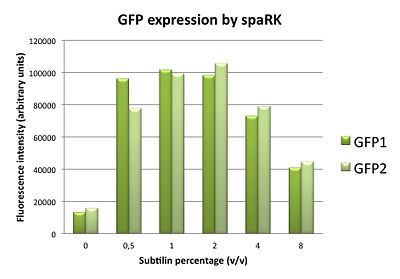