Strongly hydrophobic protein originating from Streptomyces coelicolor and codon optimized for Bacillus subtilis. It contains a hydrophobic chaplin domain and a signaling sequence.

The chaplins originate from Streptomyces coelicolor, which uses a variety of chaplins for the enforcement of its aerial hyphae.

There have to be found a variety of chaplains which can roughly be divided in two subcategories. The first is the group ranging from chaplin A till C. These are around 225 amino acids long and contain contain two hydrophobic chaplin domains, a hydrophilic region and a cell wall anchor as well as a signaling sequence. The second group of chaplins consist of chaplin D till H, which are approximately 63 amino acids long. These contain only one hydrophobic chaplin domain and a signaling sequence.

Chaplins can assemble into polymer chains, which form rod-like structures called amyloid fibers. These fibers are very rigid and hard to break down and can only be broken when boiled in SDS or with TCA and TFA treatment. They share distinguishing features with the medically important pathogenic amyloid fibers that are characteristic for many neurodegenerative diseases such as Alzheimer's, Huntington's, systemic amyloidosis and the prion diseases.

Interestingly, purified chaplins can be used to hydrophillically coat normally hydrophobic surfaces such as petri dishes. This is due to their amphipatic nature. This amphipatic property also gives them oil dispersing abilities.

This graph shows the emission of Thioflavin T (ThT) stained samples of non-induced and induced B. subtilis strains with the E chaplin in the spaRK backbone (BBa_K305011). Induction was performed at an OD of 0.5 with 1,5% subtilin containing supernatant. After 6 hours after induction cell cultures were harvested and pellets were disrupted and boiled in SDS to remove other proteins. These samples were then freeze dried and the chaplins were monomerized using 99% TFA acid. To reassemble the monomerized chaplins into amyloid fibrils the chaplins were then diluted in demi water and vortexed for 1 min. These samples were then stained with Thioflavin T to a concentration of 3 microMolair.

Fluoresce was measured using a Jobin Yvon Horiba Fluorolog. Emissions were measured between 460-600 nm at an excitation freq of 450 nm. The induced strain (in the graph indicated as DE1 the red line) shows a clear emission peak around 482 nm as you expect when ThT binds to amyloid fibrils formed by the chaplins. In the non-iduced(in the graph indicated as "DEN" the green line) shows no such emissions at the same wavelength. The blank (indicated as the black line)consists of H2O with the addition of ThT at same concentration as in the other samples. 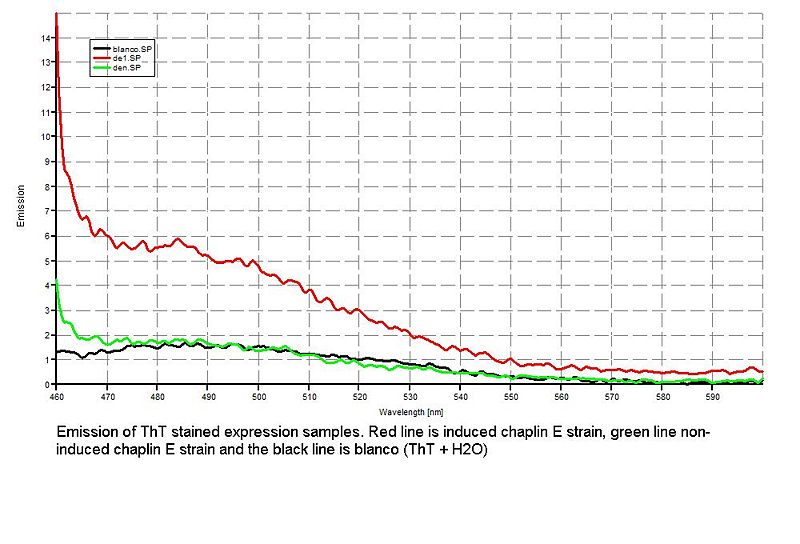 Results of the THT staining were confirmed using MALDI-TOF mass spectrometry of a B. subtilis strain expressing a chaplin E and H composite part (BBa_K305012). The mass spectrometry was used to confirm results for chaplin E and H. In blue a reference of purified chaplins from Streptomyces coelicolor was used as a positive control, the red line shows measurement for a negative control (non-induced E or H chaplin expressing B. subtilis strain) and the green line shows results for the strain in which chaplin production was induced. Peaks at approximately 5279 D, for Chaplin E, and 5122 D should show mature chaplin proteins. Because of the loss of a threonine group, mass of E chaplins is slightly reduced. This process occurs in S. coelicolor as well, it does not impair functionality of the chaplins. We observed a minor shift consistent for all of the graphs.