The sequence of this BioBrick is partially originated from pET-29 a (+) Vectors, and it is composed of T7 promoter, Lac operator,and RBS.

We tried to improve this promoter sequence at BBa_K525998 by adding a Lac operator and making it RFC 10 compatible, since the Lac operator from pET-29a(+) has an illegal XbaI restriction enzyme site .
The original BBa_K525998 doesn't contain Lac operator sequence, and we managed to insert one in it so it would work better with the presence of LacI protein, making its regulation function better.

This composite parts (BBa_K2382006) were synthesized by Allbio Life Co., Ltd and put into the standard backbone pSB1C3. First, we transformed the plasmids into E. coli BL21 (DE3) strain to express our proteins. Then IPTG was used to induce the expression system since all plasmids in our project had T7 promoter. We sonicated E. coli and did 9500 rpm and 13000 rpm centrifugation to remove the cell pellet and obtain the supernatant. To confirm the suitable concentration of cell supernatant, we did SDS-PAGE electrophoresis and coomassie brilliant blue staining. The results is demonstrated in the Fig. 1. After centrifuging two times, we could find a high percentage of proteins in the cell supernatant (the 13000 Su group) 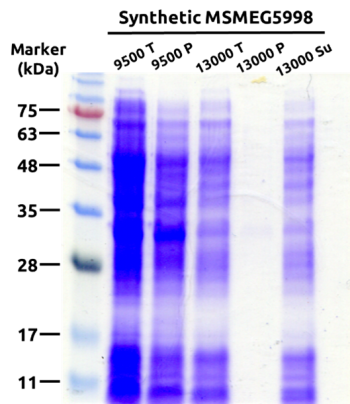 Figure 1: Cell lysates were analyzed by SDS-PAGE and coomassie brilliant blue staining. 9500 T meant the initial sample obtained after sonication; 9500 P and 13000 T meant the pellet and the supernatant gotten after 9500 rpm for 20 min; 13000 P and 13000 Su meant the pellet and the supernatant obtained after 13000 rpm for 20 min. (A)(B) Samples contained Australian and synthetic MSMEG5998. 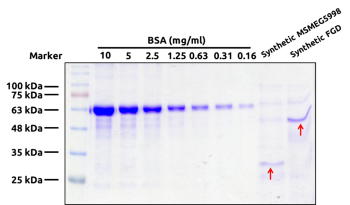 To know whether the solubility of our two enzymes (MSMEG_5998 and FGD BBa_K2382002) increased after fusing enzymes with thioredoxin, we dissolved all cell lysates which containing pellet and supernatant and did western blot to detect the content of our target proteins. All proteins were detected by anti-6x His Tag antibody because all of them contained a 6-histidines tail when bacteria expressed them. In Fig. 3, we could find there was good expression of both Australian and synthetic MSMEG5998 in the “13000 Su” group when compared with the “13000 P” group. This result meant that most proteins were dissolved in the supernatant while few proteins deposited in the cell pellet after 13000-rpm centrifugation. However, we could not observe good solubility in both Australian and synthetic FGD because there were little or no difference between the “13000 Su” group and the “13000 P” group. 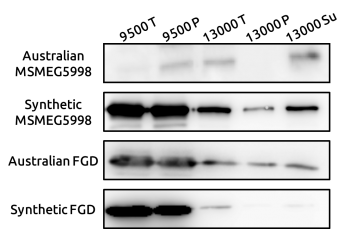 Figure 3: Cell lysates in the process of two times centrifuge were analyzed by western blot. The abbreviations of five groups were the same as Fig. 1.

Figure 4 : The growth curve of BL21 induced by IPTG from 0 to 4 hours. The concentration of BL21 reached stationary phase at 4 hours.

Though the amount of Synthetic MSMEG_5998 increased consistently with time, we could not jump to conclusions that it was proper to incubate E.coli as long as possible. Another consideration was the time it would take. Just as our expected, it growed fast at the first 2.5 hours. That’s why we also chose 2.5hr after induced by IPTG when we extracted Synthetic MSMEG_5998 from total cell lysate in other experiments.

Figure 5 : The growth curve of BL21 from 0 to 8 hr. The concentration of BL21 reached stationary phase at 4 hours and then declined slightly.

Based on previous experience, if the E.coli was incubated over 4 hours, the protein that it expressed may be degraded or mis-folded, leading to malfunction. As a result, it was also an important issue for this modeling. However, because of the lack of F420, we did not have the chance to check the enzyme activity of each time spot. It was still unknown whether the titer of the Synthetic MSMEG_5998 would change or not and awaited further research.