Tar chemoreceptor is one of four native chemoreceptors of E.coli, it is mediate chemotaxis response towards aspartate and away from Ni and Co (1). This device allows the expression of a functionally native Tar chemoreceptor.

This device is very similar to our BBa_K1992004 device it is only differ by its RBS. Here the expression system is using the native RBS of the Tar receptor as found in the E.coli genome (BBa_K1992000).

In order to test the device it was transformed to chemoreceptor free strain (UU1250) and tested for chemotaxis ability using swarming assay. As can be seen in figure 1 the cells expressing the Tar chemoreceptor create a halo indicating a functional chemotaxis result.The larger radius of the native RBS suggests a higher expression of Tar, that might raise the sensitivity of the chemotaxis system(Figure 2) (2). 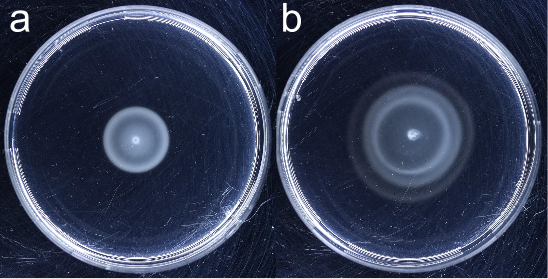