MymT can be used to accumulate Cu(II) intracellular. The gene was functionally expressed in E. coli, though it should be expressed at 15°C as it will be completely insoluble when overexpressed at 37°C.

Our project aimed to detect and chelate dietary copper as a treatment for Wilson's Disease, a copper accumulation disorder. We decided that the ideal copper chelation protein would have these properties:

As MymT was shown by Gold et. al(1) to bind up to 7 copper ions (but with a preference for 4-6) we investigated whether MymT would be suitable for our project.

In addition we expressed both from the copper sensitive promoter, pCopA, with the copper regulator expressed divergently from the pCopA promoter: (BBa_K1980011 and BBa_K1980012).

We cloned our codon optimised, his tagged MymT from Gblock into the shipping vector then transferred it into the pBAD, arabinose-inducible commercial expression vector.

When expressing our proteins we dud not express them at 15°C as advised above but did not observe any problems in expression of our sfGFP tagged protein. This may be because the sfGFP is stabilising the MymT peptide sequence

We were unable however to detect copper chelation activity of MymT when expressed from pBAD in MG1655 E. coli strain, using a BCS absorbance assay. Modelling by our team suggested that this was because insufficient protein could be expressed to chelate the amount needed to be detectable on the assay ( 2μM detection limit).

We purified the sfGFP-tagged version of this protein (BBa K1980003) but were still unable to detect copper chelation with the assay in our purified extracts.

We discovered a paper by Hötzer et al(2) that described how His-tagged GFP can be quenched by a copper ion binding to this His tag leading to a reduction in the fluorescence lifetime (the time the fluorophore spends in the excited state before returning to the ground state by emitting a photon.) They speculated that this could potentially be used as a in vivo copper assay. As we had His-tagged our chelator-sfGFP constructs we were curious to see if this technique could be applied to our parts to measure copper chelation in vivo by our parts. We believe that two possibilities were likely:

Lacking access to a fluorescence lifetime microscope ourselves we contacted Cardiff iGEM who had a FLIM machine in their bioimaging unit.

We sent Cardiff iGEM our parts MymTsfGFP in pBAD and pCopA CueR sfGFP (as a control) in live MG1655 E. coli in agar tubes. Cardiff grew them overnight in 5ml of LB with 5uM copper with and without 2mM arabinose.

The imaging unit spread each strain on slides and measured the fluorescence lifetime of three areas on each slide.

FLIM images from one section of each slide:

As expected the pCopA CueR sfGFP control was fluorescent, with and without arabinose, with the mean fluorescence lifetime a consistent 2.6ns.

When MymTsfGFP was induced the mean lifetime decreased to 2.3ns. As MymTsfGFP is was observed to be reliably expressed and because MymT is a small copper cluster separated form sfGFP by a small linker we believe that this represents additional quenching of the fluorphore by MymT-bound copper showing in vivo copper chelation. 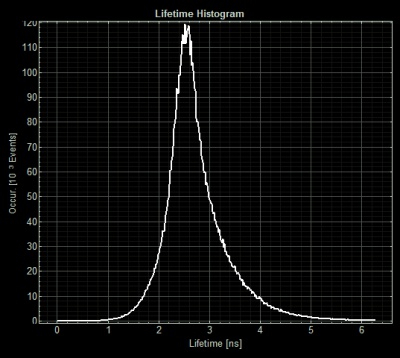 Histogram showing the fluorescence lifetime of sfGFP at 5uM copper 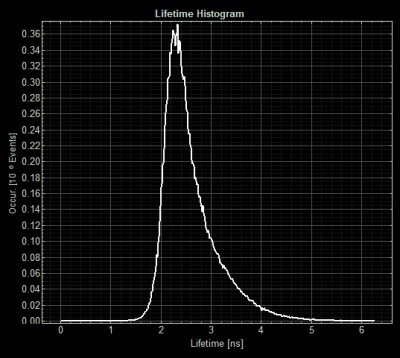 Histogram showing the fluorescence lifetime of Csp1sfGFP at 5uM copper